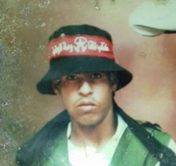 The sources said Ahmad Omar Arafa, 26, died from serious wounds at the Al-Aqsa Hospital, in Deir al-Balah, in central Gaza.

They added that Arafa was shot with a live round in the chest, after the soldiers attacked dozens of Palestinian protesters, east of the al-Boreij refugee camp.

His death brings the number of Palestinians who were killed by Israeli army fire since Friday, March 30th, to 18, including sixteen killed that day alone.

The Democratic Front for the Liberation of Palestine (DFLP) issued a statement mourning his death, and added that he was a member of its National Resistance Brigades.

In related news, the Israeli army said it will continue the implementation of shoot-to-kill orders against Palestinian protesters who approach the border fence, despite international condemnation.

Israel also refused an international investigation into its excessive use of force against the Palestinian protesters, and vowed harsher measures.

A Palestinian was shot dead by Israeli Occupation Forces (IOF) on the Gaza border Tuesday, the health ministry in the strip said, as tensions remained days after 18 people were killed during the Great March of Return.

The ministry identified the martyr as 25-year-old Ahmad Arafa, saying he was shot in clashes east of Bureij in central Gaza.

The Palestinian people in Gaza launched on Friday a major demonstration called the Great March of Return along Gaza's border with the 1948 occupied Palestine to demand their right of return, and it is expected to continue until the 15th May. Video
Israeli forces murder Palestinian driver in West Bank

Sources said that the Palestinian driver was chased by the Israeli occupation police over and he accidently hit the hitchhiking bus stop near the illegal Israeli settlement.

“Immediately, the Israeli occupation forces opened fire at the Palestinian driver and caused him severe wounds,” the sources said.

The Palestinian, whose identity is still unknown, was evacuated to an Israeli hospital, where he was announced dead.

According to the Israeli media, the Israeli occupation claimed that the Palestinian driver rammed his care into the bus stop intentionally in order to kill Jews.

However, later on, the Israeli occupation announced that the investigations into the incident found that hitting the bus stop was not intentional and he did not intend to kill anyone.

Israeli occupation forces carry out such murders from time to time, claiming that the Palestinians intended to kill Israelis.

One of the incident, which was captured by a cameraman, shot that the Palestinian driver was initially shot and the live bullet hit his leg and this led the car to deviate from the tract and hit an Israeli military jeep.

Army Kills A Palestinian Near Salfit

The army initially claimed the Palestinian reportedly “attempted to ram soldiers and settlers with his car,” but later revealed that the driver was driving a stolen car, and escaping from private security guards.

Israeli daily Haaretz said the Palestinian the driving a stolen car, and that he was chased by a private security company.

It added that the Israeli police was not involved in the chase, and that it remains unclear whether the soldier, who shot and killed the driver, was aware of the chase.

The driver did not carry any weapons, and did not intend to ram the soldiers, or carry out any sort of attack.

The soldiers opened fire at the Palestinian driver, in his thirties, and seriously wounded him, when his car crashed into a bus stop.

Haaretz said the Palestinian was driving a car with an Israeli license plate and added that the army was trying to identify him.

It also said that the driver exited the car, and tried to escape on foot, when the soldiers shot him, and he later died from his serious wounds.

The Maan News Agency said, according to Israeli sources, the man might have been driving a stolen car, and tried to avoid escape when he saw the soldiers.

The army did not report any injuries among the soldiers or the colonialist settlers but said that the Palestinian was driving very fast when he approached the bus stop. It added that it was still investigating the incident.

Israeli Ynet News said the motive behind the incident was not immediately clear, but quoted the army saying the Palestinian driver crashed into the bus stop, “and attempted to escape.”

Hebrew media sources reported that a Palestinian youth was shot and killed by Israeli soldiers on Tuesday morning near Ariel settlement west of Nablus.

Maariv newspaper earlier said that a 30-year-old Palestinian riding an Israeli car was  injured after being shot by soldiers when he crashed into a bus stop near Ariel settlement.

The Israeli occupation army later announced that the Palestinian young man succumbed to his wounds and died.

The Israeli soldiers who were in the scene claimed that the Palestinian man attempted to carry out a car-ramming attack. No injuries were reported.

No Palestinian sources have spoken about the incident yet.
2 apr 2018 Land day
Palestinian Dies From Wounds Suffered Friday In Gaza 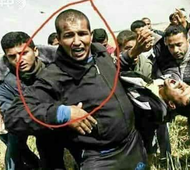 Palestinian medical sources have reported that a young man died, Monday, from serious wounds he suffered last Friday, when Israeli soldiers attacked nonviolent protesters in several parts of the Gaza Strip, killing 17 of them, and wounding hundreds.

Dr. Ashraf Al-Qedra, spokesperson of the Health Ministry in Gaza, said the Palestinian, Fares Roqab, 29, was shot with a live round in his abdomen, east of Khan Younis, in the southern part of the Gaza Strip.

He added that the Palestinian remained in a very critical condition until he died from his wounds despite all efforts to save his life.

Dr. al-Qedra stated that dozens of wounded Palestinians are still receiving treatment, including some who were shot with the Dumdum expanding bullets.

* The main photo by AFP is of Fares while helping in rescuing a wounded Palestinian, before he was shot.

A Palestinian young man on Monday succumbed to his wounds he as he participated in the largest non-violent demonstration to the east of Khan Yunis in the southern Gaza Strip, raising the death toll to 18.

Spokesman for Health Ministry in Gaza Strip, Ashra Qudra, announced that Faris al-Raqib, 29, succumbed of his serious wounds he sustained last Friday after being shot in the stomach by Israeli snipers.

Approximately 1,500 other Palestinians were also wounded on Gaza borders, resulting in calls for an independent inquiry by the European Union and UN Secretary-General Antonio Guterres.

On March 30, thousands of Palestinians had marched to the Gaza border at the start of a six-week protest, dubbed the Great March of Return marking the 42nd anniversary of Land Day.

The Land Day is of special significance to the Palestinians because it was the first time since 1948 that Palestinians in Israel organized a collective response to Israeli policies. It is marked not only by Palestinians within historical Palestine, but also by Palestinians all over the world.

This year will also mark 70 years of the Palestinian catastrophe, the Nakba, and the forced displacement of 750,000 Palestinians, whose descendants now number millions living as refugees abroad or in the occupied Palestinian territories.
1 apr 2018
Lieberman Refuses Investigation, Vows “Harsher” Military Response

Israeli Defense Minister Avigdor Lieberman said, Sunday, that Israel will not hold any investigation, or cooperate with international inquiries, into the excessive use force against unarmed protesters in Gaza, Friday, leading to the death of sixteen Palestinians, in addition to hundreds of injuries.

Lieberman did not only refuse any investigation into the deadly Israeli military assault, but also said that Israel will not cooperate with any inquiry, including potential international investigation.

The Israeli official who lived in an colony in the occupied West Bank, even threatened stronger and more violent military measures against the Palestinian protesters, “especially if any of them try to cross the border fence.”

The Israeli official also echoed previous baseless allegations claiming that “%90 of the protesters, and their families, were paid by Hamas.”

He also attacked statements by the head of Meretz party Tamar Zandberg, who called on the army to investigate the excessive use of force and described the soldiers as trigger happy.

Lieberman went on to claim that at least ten of the slain Palestinians were “members of Hamas,” and added that the soldiers “performed what was necessary and deserve a medal.”

He also alleged that Hamas “allotted 15 Million US Dollars for the processions,” and that “%90 of the protests were Hamas members, and their families, who are paid salaries.”

His statements came to justify the excessive use of force against nonviolent protesters, largely refugees displaced and expelled from their homes and lands when Israel was established in the historic Palestine in 1948.

The Palestinian Health Ministry in Gaza said the soldiers killed 16 Palestinians during the processions, and injured 1479 others, on Friday and Saturday.

It added that 805 of the wounded Palestinian were shot with live fire, 154 with rubber-coated steel bullets, 425 suffered the effects of teargas inhalation and 95 suffered burns, cuts and bruises.