“The Great March of Return” 241 killed

Israeli soldiers killed, Saturday, one Palestinian and injured at least 30 others, after a group of illegal colonialist settlers attempted to invade the northern part of the al-Mughayyir village, east of the central West Bank city of Ramallah, and were intercepted by the villagers.

The Palestinian Health Ministry said the Palestinian, identified as Hamdi Taleb Sa’ada Na’san, 38, was shot with a live round in his back, and the bullet was logged in the upper abdomen.

The Palestinian was rushed to Palestine Medical Complex, in Ramallah, but died from his very serious wounds.

The soldiers also injured at least thirty other Palestinians, among them six who were shot with live fire, including one who suffered a very serious injury.

One of the wounded Palestinians was shot with a live round in his mouth, before he was rushed to the Istishari hospital, in Ramallah, in a moderate-but-stable condition.

After the colonists attempted to invade the village, dozens of Palestinians, from the nearby Abu Falah village, rushed to aid the residents of al-Mughayyir, and were also attacked by the soldiers and the colonialist settlers, who fired a barrage of live rounds at them, preventing them from entering the village.

It is worth mentioning that Abu Na’san is a former political prisoner who was imprisoned by Israel for eight years.

The slain Palestinian man is a married father of four children, the youngest of which was born less than a year ago.

On Saturday at dawn, Israeli police officers shot and killed a  Palestinian man, after the officers opened fire at his car in Bab al-‘Amoud (Damascus Gate) area, in occupied Jerusalem.

The slain Palestinian has been identified as Riyad Mohammad Hammad Shamasneh, 37, from Qotna town, northwest of occupied East Jerusalem.

In a statement, Palestinian President Mahmoud Abbas denounced the seriously escalating violations, carried out by Israeli soldiers and the illegal colonialist settlers, against the unarmed Palestinian civilians, their homes and lands.

One Palestinian killed, others injured in settlers’ attack in Ramallah

The Palestinian Red Crescent said that one Palestinian citizen was killed and over 20 others suffered bullet injuries on Saturday after a horde of armed Jewish settlers stormed al- in al-Mughayyir village, northeast of Ramallah in the West Bank.

Ambulance crews from the Red Crescent evacuated many wounded citizens to hospitals in Ramallah and al-Bireh.

The martyr is Hamdi Na’san, 38, and suffered a serious bullet injury in his back. Others was also badly wounded by Israeli gunfire, according to the health ministry.

The events started when a gang of armed settlers stormed the village to assault its residents and embarked on opening fire at local young men who were defending their homes and trying to fend off the assailants.

According to local sources, the settlers and soldiers who came later to back them intensively opened fire at homes and local residents.
Israeli Police Kills A Palestinian In Jerusalem

Israeli police officers shot and killed, on Saturday at dawn, a young Palestinian man, after the officers opened fire at his car in Bab al-‘Amoud (Damascus Gate) area, in occupied Jerusalem.

The slain Palestinian has been identified as Riyad Mohammad Hammad Shamasna, from Qotna town, northwest of occupied East Jerusalem.

The Israeli Police said the Palestinian driver “endangered the lives of the officers, who opened fire at the car, and killed him during the ensued chase.”

It added that other Palestinians were also in the car, but did not provide further details about them, and only stated that the Palestinian “entered Jerusalem illegally, and was driving a car suspected to have been stolen.”

The Palestinians in the car were heading to their work in occupied Jerusalem, when the officers opened fire at their car.

Although Qotna is in the Jerusalem Governorate, Israeli surrounded and isolated the Palestinian town by the Annexation Wall, and its inhabitants have been denied access to occupied Jerusalem since 2004.

A Palestinian man died at dawn Saturday after he was shot by the Israeli police in Jerusalem city.

The Israeli police said that Riyad Shamasneh, a resident of Qatanna town in Occupied Jerusalem, was shot during a car chase.

The police claimed that Shamasneh was driving a car with an Israeli license plate.
25 jan 2019
2 Palestinians killed, others injured in Gaza and West Bank

Two Palestinians were killed and dozens injured on Friday when the Israeli occupation forces (IOF) quelled peaceful protests in the Gaza Strip and West Bank.

The Palestinian Ministry of Health in the West Bank said that Ayman Hamed, 17, was shot in the chest during Ramallah protests.

Local sources said that the IOF has detained Hamed's body since he was pronounced dead at a Ramallah hospital.

Meanwhile in the Gaza Strip, a 25-year-old young man identified as Ehab Abed was killed, while 22 Palestinians, including 14 children, were injured during the Great March of Return.

Gaza Ministry of Health said that six paramedics were injured when the IOF opened fire at a Palestinian ambulance on Gaza border.

Thousands of Palestinians marched along the border between the Gaza Strip and Palestinian territories occupied since 1948 on the 44th Friday of the Great March of Return.

The Great March of Return was launched on 30 March to demand the Palestinian refugees' right to return and pressure Israel to break the 13-year-long blockade on the Gaza Strip.

The Israeli occupation army has killed 261 protesters and injured about 27,000 others, 500 of whom are in critical condition.
Army Releases Footage of Ashraf Na’alwa Assassination

A video released on Wednesday evening revealed the operative in which the Israeli army carried out the assassination of Ashraf Na’alwa, 23, in Askar refugee camp, east of Nablus.

According to the video, which was published by Israeli Channel 13, the Israeli army used hand grenades, bullets and guided missiles, as well as armored vehicles and infantry forces, and prevented the Red Crescent crew from entering the area.

In the early hours of Thursday, December 13, 2018, Israeli forces announced the assassination of Ashraf Na’alwa, who carried out a shooting in Barkan settlement, killing two Israeli settlers, according to the PNN.
22 jan 2019
Palestinian killed, two injured in Israeli shelling

At least one Palestinian was killed while two others were injured as Israeli forces shelled  the Gaza Strip after an Israeli soldier was shot along the border of the coastal enclave.

The Gaza health ministry confirmed that a 24-year-old man was killed and two others were wounded in the shelling, one of them is in a critical condition. video video

The incident occurred when Israeli military shelled a site in the eastern Gaza Strip affiliated with the Ezzedine al-Qassam Brigades, Hamas’s armed wing.

The attack came shortly after an Israeli soldier was slightly injured near the border fence in the southern Gaza Strip.

Gaza, home to more than two million people, has been under a crippling Israeli blockade for 11 years that has imposed enormous barriers to the movement of Palestinians.

The siege has devastated the local economy, severely restricting the entry of food and access to basic services.
21 jan 2019
IOF kills Palestinian young man at checkpoint

The Israeli Occupation Forces (IOF) shot and killed late Monday a Palestinian young man after an alleged stabbing attack near Hawara checkpoint in Nablus, to the north of West Bank.

Israeli forces, stationed at the checkpoint, opened fire at the young man who was later proclaimed dead, the sources added.

No Israelis were wounded in the alleged attack.

The area was later declared a closed zone where combing operations were carried out.

Israeli soldiers killed, on Monday at night, a Palestinian man at Huwwara military roadblock, south of Nablus, in the northern part of the occupied West Bank.
Media sources in Nablus said the soldiers shot Mohammad Fawzi Adawi, 36, seriously wounding him, and prevented Palestinian medics from approaching him, before he succumbed to his wounds.

The Palestinian, from Azzoun town east of the northern West Bank city of Qalqilia, was shot with at least three live rounds in his upper body.
Israeli media sources quoted the army claiming that the Palestinian “exited a car and ran towards a soldier and attempted to stab him, before he was neutralized.”

They added that the soldiers closed the roadblock and initiated extensive searches in the area.
14 jan 2019
Palestinian child injured in return protests dies of wounds

A Palestinian child succumbed to serious wounds he sustained last week after being shot by Israeli forces during the Great March of Return border protests in the besieged Gaza Strip, said medical sources.

Earlier Sunday, a 33-year-old man also died of injuries he sustained a few weeks ago by Israeli forces.

The Great March of Return protests began on March 30 and are planned to continue until a 12-year long Israeli blockade on Gaza is lifted.
13 jan 2019
Palestinian Dies From Wounds Suffered Several Weeks Earlier In Gaza 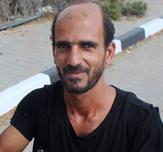 The Palestinian Health Ministry in Gaza has reported, Sunday, that a man who was shot and seriously injured by Israeli army fire, three weeks ago, has died from his wounds in a hospital in the southern part of the Gaza Strip.

Dr. Ashraf al-Qedra, the spokesperson of the Health Ministry in Gaza, said an Israeli army sharpshooter shot the man, Anwar Mohammad Qdeih, 33, with a live bullet in his neck, near the perimeter fence, east of Khan Younis, in southern Gaza.

The man underwent several surgeries following his serious injury, on Friday, October 19th 2018, but remained in a critical condition at a Gaza European Hospital, until he succumbed to his serious wounds.
11 jan 2019
Soldiers Injure Kill One Woman, Injure 25 Palestinians, Including A medic, In Gaza
Israeli soldiers killed, Friday, one woman, injured fourteen Palestinians, including one medic and a journalist, and caused dozens to suffer the effects of teargas inhalation, after the army resorted to the excessive use of force against the protesters, participating in the Great Return March procession in the Gaza Strip. video  video

The attacks against the nonviolent protesters mainly took place near the perimeter fence, east of Gaza city, the al-Boreij refugee camp in central Gaza, in addition to Khan Younis and Rafah, in the southern part, and Jabalia in northern Gaza.

The Palestinian Health Ministry in Gaza said the soldiers shot and killed one woman, east of Gaza city, injured three others before they were moved to the Shifa Medical center, and caused dozens to suffer the effects of teargas inhalation.

Dr. Ashraf al-Qedra, the spokesperson of the Health Ministry in Gaza said the slain woman is yet to be officially identified.

He added that the soldiers also shot two Palestinians with live fire, east of Jabalia, suffering moderate wounds, before they were rushed to the Indonesian Hospital in nearby Beit Lahia.

Dr. al-Qedra also stated that the soldiers also fired a high-velocity gas bomb at a Red Crescent ambulance, east of Gaza, wounding several Palestinians, including a medic, identified as Emad Sinwar, with a gas bomb that struck his neck, in addition to one journalist.

One Palestinian was shot with live fire, and many others suffered the effects of teargas inhalation, east of Khan Younis, in southern Gaza.
Page:  2 - 1
Powered by