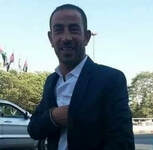 Israeli soldiers killed, Tuesday, a Palestinian from Hebron, in the southern part of the occupied West Bank, reportedly after he attempted to stab them.

Palestinian sources have confirmed that the slain man as distributing notices from the Sharia Court in the city, when the soldiers shot him.

The Palestinian Red Crescent Society (PRCS) said the soldiers shot and seriously injured Yasser Fawzi Shweiki, 27, and prevented its medics from approaching him.

Eyewitnesses said the Palestinian was left bleeding on the ground, after the soldiers shot him in the chest, and later dragged his corpse into the nearby Rajabi building.

His father, Fawzi Shweiki, said that he heard the gunshots, but did not know that it was his son, who works for the local Sharia court and was distributing notices, was the victim.

Israeli sources claimed that the soldiers shot the Palestinian after he attempted to stab them with a knife.
IOF seizes security camera footage, closes roads in Salfit

The Israeli occupation forces (IOF) on Tuesday morning confiscated security camera recordings from a gas station near the eastern entrance to Salfit city.

According to local sources, Israeli soldiers stormed al-Huda gas station and seized security camera video recordings on allegations that an Israeli car came under gunfire attack on a road near Ariel settlement.

Israeli forces detained two Palestinian children, on Friday, after they were caught crossing the border fence into Israel from the southern besieged Gaza Strip.

An Israeli army spokesperson said in statement that the Palestinian children were searched and that three knives were found in their possession.

The spokesperson added that the children are part of a recent increase of Palestinians youths attempting to cross into Israel to “escape the reality in Gaza.”

The two children were then taken in for questioning by Israeli security forces. However, their identity remained unknown.

Israeli forces regularly detain Palestinians attempting to cross into Israel from the besieged Gaza Strip, which has suffered under a nearly 12-year-long military blockade by Israel and Egypt.
Israeli artillery targets resistance post in northern Gaza

An Israeli tank on Thursday evening bombed a Palestinian resistance post in the besieged Gaza Strip, with no reported casualties.

A spokesperson for the Israeli occupation army said that a tank shelled a site belonging to Hamas in northern Gaza after a military facility came under gunfire attack.

According to local sources, the Israeli artillery fired at least two projectiles at an observation post in al-Zaytun neighborhood, south of Gaza City.

The Israeli artillery attack took place after the Hebrew media claimed that an Israeli army watchtower behind the security fence in northern Gaza came under fire by Palestinian gunmen.

An investigation conducted on Tuesday by the Palestinian Center for Human Rights (PCHR) has refuted Israeli claims about the alleged car-ramming attack in western Ramallah, describing what happened as a “new crime of excessive use of force.”

“At early dawn hours of Monday, 04 March 2019, in new crime of excessive use of lethal force against Palestinian civilians, Israeli forces killed two Palestinian civilians in Kafur Nei’mah village, west of Ramallah, and wounded another one,” PCHR started its investigative report.

“The Israeli forces claimed that the three civilians carried out a run-over attack, which resulted in the injury of two Israeli soldiers. Other Israeli soldiers opened fire at them, killing two of them and wounding another one,” the report added.

However, “investigations and eyewitnesses’ statements refute the Israeli forces’ claims. The eyewitnesses said that the three civilians were heading to their work at a bakery, where they should be at early hours. While the civilians were on their way to work, they were surprised with Israeli vehicles and crashed one of them. As a result, the civilians’ car hood was damaged,” the report elaborated.

“According to investigations conducted by the Palestinian Center for Human Rights (PCHR), at approximately 02:30 on Monday, Israeli forces backed by three military vehicles moved into Kafur Nie’mah village, west of Ramallah. They raided and searched a house belonging to Yousef Mahmoud al-Deek (42) and arrested him, taking him at the village entrance, where the Israeli vehicles stationed. One of the Israeli vehicles was damaged before their withdrawal from the village.

At approximately 03:20, the three [victimized] civilians were heading to their work via a car with an Israeli registration plate, meanwhile, the diver was surprised with Israeli vehicles at the village’s entrance. As a result, the driver could not control the car and crashed one of the Israeli vehicles.

The Israeli soldiers immediately opened fire at the civilians, killing two of them and wounding another one. The wounded civilian was arrested while the victims’ bodies were kept in the Israeli custody.”

“The two victims were identified as Ameer Mahmoud Darraj (20), from Khebitha al-Mosbbah village, and Yousef Raied Anqawi (20), from Beit Sirah village. The wounded civilian was identified as Hitham Basem ‘Alqam (20), from Safa village, west of Ramallah,” according to the report.

“I was heading to my work at Itihad Juice Company, which is located at the entrance to Kafur Nie’mah village. I passed through the city center and I did not notice any suspicious movements. It was approximately 03:00 and the weather was rainy and foggy. When I was on the village’s road, the vision was clear, as there were lights on the road, but when I exited it and moved towards the company, the road was sloppy and there was no lights.

I moved back, I was around 150 meters away from them, and it was approximately 03:20. I saw a car driving at approximately 60-70 km/h coming from the village and moving in the same direction. They lighted the military torches at it. The car then deviated from its path and hit the Israeli military vehicle that was blocking the road. I heard the crash and minutes after, I heard continuous shooting and I estimate that 15-20 bullets were fired.”

PCHR has condemned the crime and expressed its concern over the Israeli use of lethal force against Palestinian civilians.

PCHR also called on the international community and UN bodies to stop Israel’s escalating crimes and violations and work on providing international protection for the Palestinians in the occupied territories.
4 mar 2019
Army Kills Two Palestinians, Injures One, Near Ramallah

Israeli soldiers killed, on Monday at dawn, two Palestinians, and injured one, after the army alleged they tried to ram them with their car, wounding two soldiers, in Kafr Ni’ma village, west of the central West Bank city of Ramallah.

The slain Palestinians have been identified as Amir Mahmoud Darraj, 20, from Kharbatha al-Misbah village, and Yousef Raed Anqawi, 20, from Beit Sira village, west of Ramallah.

The wounded young man has been identified as Bassem Jom’a Alqam, 20, from Safa village, west of Ramallah.

The Israeli army stated that two of its soldiers were injured, one seriously, when the Palestinian car “rammed into them in the village,” and added that the soldiers opened fire at the car, killing two and mildly wounded a third.

It added that the soldiers stopped to the side of the road, close to the exit of the village, when the car reportedly rammed them.

The army also stated that its “investigation concluded that the incident was a deliberate attack, and not an accident.”

The army said the soldiers had to stop on the side of the road due to a mechanical error with their jeep, before the Palestinian car rammed into them.

Palestinian sources said that the incident was a traffic accident, and not a ramming attack as the military claims, as the driver and his passengers could not see the soldiers before hitting them with the car.

The Palestinians car slid due to the wet road, before it struck the army jeep, they added.

Khaldoun ad-Deek, the head of Kafr Ni’ma Village Council, said the accident happened in an area of a difficult terrain with  rough and curvy roads.

It is worth mentioning that the many army jeeps invaded the village, and conducted extensive searches of homes, before abducting several Palestinians, in addition to opening fire at protesters.

The soldiers placed the village under a strict siege, after closing all entrances and main roads.

On Sunday at night, the soldiers invaded the village before storming and searching homes, and abducted a young man, identified as Yousef Mahmoud ad-Deek.

Many Palestinians suffered the effects of teargas inhalation, after the soldiers fired gas bombs and rubber-coated steel bullets at Palestinians protesting the invasion.

The soldiers also attacked, on Monday morning, several schoolchildren, and hurled gas bombs and concussion grenades at them, in addition to preventing them from reaching their schools.

Two Palestinian young men were killed and another was wounded at dawn Monday when soldiers opened fire at them near Kafr Ni'ma town in Ramallah.

The Israeli occupation army claimed that the young men carried out a car-ramming attack and threw Molotov cocktails at soldiers.

According to the Hebrew news website 0404, Israeli soldiers opened fire at three young men, killing two of them, after they threw Molotov cocktails. Another one suffered bullet injuries and was detained

Israel’s Channel 10, for its part, said that two Israeli soldiers were wounded after a Palestinian car ran them over in an area near Kafr Ni’ma town, west of Ramallah.

The Channel added that other soldiers responded immediately and opened fire at three young men aboard the car, killing two and injuring another.

Eyewitnesses reported that the Israeli occupation forces detained a Red Crescent ambulance crew and prevented it from going to the scene to provide medical assistance for the Palestinians.

Later, violent clashes broke out between local youths and Israeli forces at the main entrance to Kafr Ni’ma town. Live and rubber bullets were reportedly used by soldiers during the skirmishes, but luckily no one was injured.
3 mar 2019
IOF kidnaps Palestinian for carrying knife

The Israeli occupation forces (IOF) on Saturday evening kidnapped a Palestinian young man near Jenin in the West Bank, claiming they foiled an intended stabbing attack.

According to Israel’s Channel 12, the young man was found in possession of a knife he was intending to use to carry out a stabbing attack.

The young man was subdued and taken to an interrogation center.
17 feb 2019
Anti-occupation stabbing attack carried out in Jerusalem

An Israeli settler was reportedly injured on Sunday morning in an alleged anti-occupation stabbing attack in Gilo neighborhood, south of occupied Jerusalem.

Hebrew-speaking sources claimed an Israeli settler sustained serious stomach wounds and was rushed to the Shaare Zedek hospital for treatment.

The alleged attacker fled the scene. Israeli police and military troops have, meanwhile, been raking through the area, chasing down the perpetrator.
Page:  4 - 3 - 2 - 1
Powered by