8 sept 2019
Army Injures One Palestinian, Abducts Another In al-‘Isawiya

They added that the soldiers shot a young man with a concussion grenade in the head, while he was filming the invasion and the protests.

The soldiers also abducted a teen, identified as Mohannad Abu ‘Assab, 17, while standing near the al-Arba’in Mosque in the town, and took him to an interrogation facility.
Soldiers Abduct A Palestinian, Injure Many, in Sebastia

Israeli soldiers invaded, on Saturday evening, the town of Sebastia, north of the northern West Bank city of Nablus, and abducted a young Palestinian man in addition to wounding several others.

Mohammad Azem, the mayor of Sebastia, said many armored Israeli military vehicles invaded the town, before Palestinian youngsters protested the invasion and hurled stones at them.

Azem added that the soldiers fired many rubber-coated steel bullets and gas bombs, causing scores of Palestinians to suffer the effects of teargas inhalation.

The soldiers also abducted a young man, identified as Rezeq Nahedh Aqel, and took him to a nearby military base.
Israeli Army Fires Missiles Into Northern, Central And Eastern Gaza 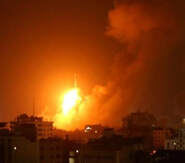 The Israeli Air Force fired, late on Sunday at night, several missiles into areas in the northern, central and eastern parts of the Gaza Strip, causing excessive damage; the army claimed it was retaliating to a shell fired from Gaza.

Media sources in Gaza said the army fired several missiles into an area near the Nusseirat refugee camp, in central Gaza, causing excessive damage without leading to casualties.

They added that the army also fired missiles into a site in Beit Lahia, in northern Gaza, and another building southeast of Gaza city, causing excessive property damage, and that Israeli navy ships fired many flares near Gaza city.

According to the Palestinian Quds News Network, two of the targeted sites are run by the al-Qassam Brigades, the armed wing of Hamas, in northern and central Gaza.

The Israeli army claimed that it was retaliating to one shell, which was reportedly fired from the Gaza Strip, and landed in an open area near Sderot in the Negev, leading to a “brush fire,” according to Israeli Ynet News.
7 sept 2019
Site in south of Gaza shelled after drone drops explosives at Israeli military vehicle

Israeli artillery opened fire today at a post in Rafah in the south of the Gaza Strip shortly after a drone flown from Gaza reportedly dropped explosives on an Israeli army vehicle, according to WAFA correspondent and Israeli reports.

WAFA correspondent said an Israeli jetfighter fired a missile and army artillery deployed inside the Israeli border in the south of the Gaza Strip, fired two shells at a post in the area destroying it completely and setting it on fire. No one was reportedly hurt.

Israeli military reports said the attack came after a drone was flown from Gaza over the border fence today dropped explosives on a military vehicle causing damage but no injuries.

Israeli warplanes had earlier attacked several posts in the north of the Gaza Strip causing damage but no injuries.
Army Fires Artillery Shells Into Palestinian Lands In Northern Gaza

Israeli soldiers fired, on Friday at night, several artillery shells into Palestinian lands, northeast of Beit Hanoun, in the northern part of the coastal region.

Media sources in Gaza said the shells landed and detonated in farmlands, causing no casualties among the Palestinians.

They added that the Israeli Air Force was extensively seen and heard flying over Gaza city, and the northern parts of the coastal region.

The Israeli army said it was retaliating to five shells, which were reportedly fired from the Gaza Strip, on Friday, evening, and landed in open areas near Shear HaNegev settlement and Sderot, and added that siren alerts were sounded in various communities across the perimeter fence with Gaza.
Israeli Navy Opens Fire On Fishing Boats In Gaza

Media sources said the boats were in Palestinian waters when the navy attacked and opened fire on them.

The attack did not lead to casualties, but forced the fishermen back to the shore to avoid further escalating from the navy.

Also on Friday, Israeli soldiers attacked the Great Return March processions in the Gaza Strip killing two children, and wounding 81 civilians, including 38 journalists, one journalist and two paramedics.
6 sept 2019
On 73rd Friday of Great March of Return: 2 Children Killed and 81 Civilians Injured, including 39 Children, 1 Journalist and 2 Paramedics by Israeli forces
The protests lasted from 15:00 to 19:00 and involved activities such as speeches by political leaders and theatrical performances. Hundreds of civilians protested at varied distances from the border fence across the Gaza Strip. The protestors threw stones, Molotov Cocktails and firecrackers at the Israeli forces, well-shielded hundreds of meters away, while the latter responded with excessive force.

To this date, PCHR documented 210 killings by Israel since the outbreak of the protests on 30 March 2018, including 46 children, 2 women, 9 persons with disabilities, 4 paramedics and 2 journalists. Additionally, 13,809 were wounded, including 2,932 children, 422 women, 233 paramedics and 213 journalists, noting that many of those injured had sustained multiple injuries on separate occasions.

The following is a summary of today’s events along the Gaza Strip border:

As a result, ‘Ali Sami ‘Ali al-Ashqar (17), from Jabalia refugee camp, was killed after being shot with a live bullet to the chest. According to PCHR’s investigations, at approximately 17:40, ‘Ali was shot with a bullet that entered the backside of his chest and exited through the lower front side of his neck while only few meters away from the border fence.  A crew member of Military Medical Services evacuated him to the Indonesian Hospital, he was declared dead upon arrival at 18:08. Moreover, 35 civilians were injured, including 25 children: 28 with live bullets and their shrapnel; 3 with tear gas canisters; and 4 with rubber bullets.

Gaza City: Hundreds of protestors took part in eastern Malakah area. Speeches, theatrical performances and other segments were performed at the protest central encampment. Dozens of protestors approached the fence and threw stones with slingshots at Israeli soldiers. The soldiers fired live and rubber bullets and tear gas canisters at the protestors.

As a result, Khaled Abu Baker Mohammed Sufian al-Rab’ie (14), from al-Shija’iyah neighborhood, was killed.  According to PCHR’s investigations, the child arrived at Shifa Hospital at approximately 17:35 with a bullet wound in his waist, and he was pronounced dead at 17:45.  Moreover, 16 civilians were injured, including 6 children, a female paramedic and a journalist: 6 with live bullets, 2 with rubber bullets and 8 with tear gas canisters. The wounded paramedic is Mona Khalifah Lubbad (21), who sustained a shrapnel wound to her left foot. The wounded journalist, Ahmed Mohammed al-Hendi (23), sustained a rubber bullet injury to the hand. Mr. al-Hendi works for Siraj Media Services.

Central Gaza: Hundreds of civilians, including women and children, took part in the eastern Bureij refugee camp protests; dozens gathered adjacent to the border fence at a range varying between 2 – 70 meters. The Israeli soldiers, reinforced with 11 military jeeps, launched a drone to photograph protestors who had thrown stones and sound bombs at the military jeeps and shot them with live and rubber bullets in addition to teargas canisters.

As a result, 6 civilians, including 3 children, were wounded: 4 with live bullets and shrapnel, 2 with rubber bullets.

Khan Younis: The Israeli forces’ use of force against the protesters, who gathered in the encampment in eastern Khuza’ah and near the border fence, resulted in the injury of 13 civilians, including 4 children and a paramedic: 5 with live bullets and shrapnel, 2 with rubber bullets; and 6 with tear gas canisters.

Furthermore, many other civilians were wounded with rubber bullets, but their injuries were reported to be minor, while others suffocated due to teargas inhalation.  They received treatment on the spot in the field medical point. The wounded paramedic, As’ad Sami Mohammed Abu Ghalwah (30), from Khan Younis, was shot with a rubber bullet to the right foot.

Rafah: hundreds participated in the eastern Shokah protests, where folklore songs and speeches were held. Dozens approached the border fence and threw stones at the shielded Israeli soldiers, who responded with live and rubber bullets and teargas canisters against the protestors. As a result, 11 civilians were injured, including a child. It was documented that 9 were shot with live bullets and their shrapnel and 2 were shot with rubber bullets.
IOF injures Palestinians in Kafr Qaddum weekly demonstration

The Israeli occupation forces (IOF) on Friday afternoon shot and injured a number of Palestinian citizens in the weekly demonstration of Kafr Qaddum village in the West Bank district of Qalqilya.

The protesters chanted slogans condemning the Israeli Prime Minister Benjamin Netanyahu's visit to the Ibrahimi Mosque in al-Khalil on Wednesday.

Local sources said that the IOF fired rubber-coated metal bullets and stun grenades at the peaceful demonstrators injuring three of them.

They added that the IOF soldiers chased the youths on the streets and clashed with them, but no arrests were reported.

Local sources said that violent clashes broke out between dozens of Palestinian youths and the IOF who stormed Kobar village in the early morning hours.

The IOF soldiers heavily fired live ammunition and tear gas canisters at the youths who responded by throwing stones. No injuries were reported.

The Israeli occupation forces on Thursday evening violently attacked a Palestinian protest in Bab al-Amud area in Jerusalem against the killing of women.

Local sources said that the Israeli forces physically assaulted the peaceful protesters and forced them to evacuate the area.

The protest was organized by a group of activists against the death of Palestinian women at the hands of Israeli forces or in honor crimes, and to support detained women in Israeli jails. video video
5 sept 2019
Soldiers Injure Dozens Of Palestinians Near Nablus

Dozens of Palestinians suffered the severe effects of teargas inhalation, on Wednesday evening, after Israeli soldiers attacked them when they intercepted a group of illegal colonialist settlers who invaded their lands, and burnt olive trees, in Madama village, south of the northern West Bank city of Nablus.

Ehab al-Qet, a member of Madama Village Council, told the Palestinian News & Info Agency (WAFA), that the colonists attacked the southern area of the village, before local youngsters incepted them and started throwing stones at them.

He added that many soldiers were in the area with the colonists and started firing a barrage of gas bombs at the villagers, causing dozens to suffer the effects of teargas inhalation.

Al-Qet also said that the colonists set many olive trees ablaze, while the soldiers prevented the Palestinians from reaching their orchards to extinguish the fire.

Hordes of extremist Jewish settlers on Wednesday evening attacked Palestinian citizens and their property in Madama and Burin town, south of Nablus in the occupied West Bank.

According to local sources, dozens of settlers from Yitzhar settlement stormed the southern area of Madama under security and military protection and embarked on burning and destroying several olive trees.

Later, some local residents from Madama tried to confront the settlers before soldiers intervened and fired volleys of tear gas canisters at the latter, causing them to suffer from injuries.