The Hebrew newspaper said that the funds withheld will be used to compensate the farmers of the Israeli settlements neighboring the Gaza Strip for the damages caused in their lands by fires sparked by burning kites sent from the costal enclave.

According to the paper, this move came after several large fires broke out on Sunday in Israeli settlements bordering the Gaza Strip. Fire-fighting teams used special aircraft to prevent the blaze from spreading to other areas.

The Israeli government claimed that damages so far are estimated at millions of shekels after over 250,000 dunums of land were burned. The government said that numbers are expected to increase since kite attacks are witnessed on a daily basis.
3 june 2018
Gazan youths torch Israeli military post near border fence

A group of Palestinian youths on Sunday were able to breach the Israeli border fence east of Khan Younis city in southern Gaza and set fire to Israeli military equipment.

Local sources told the PIC reporter that the youths fled back into the Gaza Strip after setting the Israeli army site alight.

Eyewitnesses reported seeing Israeli soldiers and vehicles rushing to the place and combing the area.

This is the third time in less than two weeks that Gaza youths have managed to infiltrate the Israeli border area and burn military posts.

In another context, train travel was suspended on Sunday for several hours between Ashkelon and Netivot in the 1948 occupied Palestine after massive fires erupted in settler farmlands neighboring the Gaza Strip by flaming kites launched from the enclave.

A Palestinian youth was injured on Sunday evening after being shot by the Israeli occupation forces stationed at the border fence east of Khuza'a town in southern Gaza.

The young man, who was standing close to the Great Return March camps, was transferred to the hospital, according to the PIC reporter.
Train travel near Gaza border halted due to fire kites

Train travel was suspended on Sunday between Ashkelon and Netivot in the 1948 occupied Palestine after a massive fire flared up near Sderot by a flaming kite launched from the Gaza Strip, Walla website reported.

Hebrew TV channel 14 said that other fires were witnessed on Sunday morning in Yad Mordechai and Nir Am settlements sparked by flaming kites from Gaza.

Yedioth Ahronoth newspaper said that Gaza's fire kites destroyed about 3,000 dunums of farmlands on Saturday, while nearly 28,000 dunums have been burned since the start of the Great Return March protests.

Burning kites are one of the tools used by Palestinian youths in the Gaza Strip to confuse the Israeli snipers shooting at peaceful protesters taking part in the Great Return March near the border.
Arrests, cash theft reported in dawn sweep by Israel military

The Israeli occupation forces (IOF) at daybreak Sunday injured a young man and arrested others in an abduction sweep rocking the West Bank.

The Israeli army claimed responsibility for the abduction of seven Palestinians on allegations of hurling stones at settlers’ cars.

The IOF ravaged Palestinian homes in al-Khalil and seized thousands of shekels.

The assault culminated in the abduction of a Palestinian citizen from his family’s home in Idna town, west of al-Khalil.

At the same time, four Palestinians, among them a 16-year-old minor, were kidnapped by the Israeli military from Bethlehem province.

Meanwhile, one Palestinian young man was injured and another arrested after Israeli soldiers stormed the villages of Beit Reema and Nabi Saleh, northwest of Ramallah city in the occupied West Bank.
2 june 2018
Activist Who Filmed Fatal Shooting of Hebron Man Detained by Israeli Forces

Israeli soldiers, on Saturday, briefly detained a local activist who filmed the fatal shooting of a Palestinian worker earlier in the morning in the southern occupied West Bank city of Hebron.

The Israeli army alleged that Sabarneh, who worked in construction in the area, attempted to run soldiers over with a bulldozer. However, no injuries were reported among the soldiers.

Jaber denied the Israeli army’s account, saying that “Sabarneh was driving a Bobcat excavator while another worker walked next to him, Israeli soldiers asked them to stop when he was at least 10 meters away from them, the walking worker stopped, but Sabarneh apparently did not hear the soldiers and continued his way so they opened fire at him until he was killed.”

Last week, Israeli lawmakers proposed a new bill in the Israeli Knesset that would criminalize the photographing or recording of Israeli soldiers while on duty.

The bill was proposed with the support of right-wing Israeli Defense Minister Avigdor Lieberman, and if passed, those found in violation of the law could face a prison sentence of up to five years.
Israeli Soldiers Kill A Palestinian Worker In Hebron 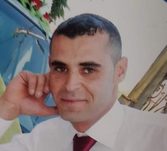 Israeli soldiers killed, Saturday, a Palestinian worker in Hebron, in the southern part of the occupied West Bank, while he and other workers were conducting work for the Hebron City Council to rehabilitate and expand a road near the Ibrahimi Mosque.

The Health Ministry in Hebron said the soldiers fatally shot Rami Wahid Hasan Sabarna, 36, in Jaber neighborhood in the Old City, near the military roadblock leading to the Ibrahimi Mosque.

It added that the soldiers also stopped a Palestinian ambulance at the scene, and prevented the medics from approaching the Palestinian, before he bled to death.

An Israeli ambulance later arrived, before its medics placed Rami’s body in a black bag and took it away.

The army claimed that the Palestinian worker “attempted to ram the soldiers with his vehicle, before they shot him,” an allegation which was denied by eyewitnesses, who said the young man was just working, and did not attempt to attack the soldiers, or harm them in any way.

Aref Jaber, a local nonviolent activist against the Annexation Wall and Colonies, who lives near the area where the army killed the worker, said Sabarna was driving a small and loud bulldozer, and added that the worker passed by some soldiers who then started shouting at him an ordering him to stop.

“He did not pose any threat to them, he passed by them and could not hear their shouts and orders,” Aref said, “Then, they just opened fire at him and his bulldozer, seriously wounded him, before removing him from his vehicle and left him to bleed on the ground. When Red Crescent medics arrived, the soldiers prevented them from providing Sabarna with the urgently needed treatment, and he bled to death, before the soldiers placed his corpse in a black plastic bag and took him away.” video

The soldiers also removed media outlets from the area, and prevented the journalist from performing their duties.

A Palestinian young man was shot dead Saturday by the Israeli occupation forces (IOF) near the Ibrahimi Mosque in al-Khalil city in the southern West Bank.

An Israeli army spokesman claimed in a statement that a Palestinian man attempted to run over Israeli soldiers in al-Khalil before he was shot dead. No casualties were reported among the soldiers.

Earlier reports said that the young man was shot by an Israeli settler.

The Palestinian Red Crescent society said that the IOF prevented its crews from reaching the injured man to save his life.

Safa news agency reported, quoting activist Mohammed Awad, that the IOF shot Rami Sabarneh, 35, near a military checkpoint in Jaber neighborhood in al-Khalil while he was riding a bulldozer.

Awad said that Sabarneh works for a construction company and he is a father of two children.

The Israeli forces have repeatedly carried out field executions against Palestinian youths in the West Bank and Jerusalem under the pretext that they were attempting anti-Israel attacks.
31 may 2018
Palestinian injured prisoner to be released prior court hearing

Israeli authorities decided Thursday to release a Palestinian female prisoner, who was shot and injured in the leg several days ago for allegedly planning an attack in occupied Jerusalem.

Khawla Shahatit was shot and injured by Israeli police on Sunday evening after they suspected her of planning an attack.

She was taken to an Israeli hospital, where she was held in custody. Police later said that she was not carrying any weapon.

Attorney Mufeed al-Haj of the Palestinian Prisoner’s Society affirmed that Israeli authorities informed him of their decision to release her, days before her court hearing.

Khawla is still in hospital where she underwent surgery in her right leg and her condition is reported stable, said al-Haj.
28 may 2018
Israeli settlers terrorize Palestinians, assault property in Nablus

According to eye-witnesses, dozens of Israeli settlers flocked to Hawara military checkpoint and damaged Palestinian cars.

A PIC news correspondent said hundreds of Israeli cops and soldiers flocked to the shooting scene and closed off the main access road to Shu’fat town.

The reasons for the shooting and the women’s identity remain unclear.

The injured woman was transferred to the Israeli Shaare Zedek Hospital so as to be treated for the Israeli-inflicted injuries, reported moderate.

Woman wearing a burqa shot after arousing suspicion of soldiers and failing to heed orders to stop; aiming to neutralize, soldiers moderately wound woman; no weapons found in her possession.

Border Police officers opened fire on a woman who they suspected aimed to harm them near Yekutiel Adam Street in Jerusalem.

The paramilitary soldiers said their suspicion was aroused after the woman started slowly approaching them, who was wearing a Burqa, which they feared may be concealing a weapon or an explosive device.

After the woman failed to heed their calls to stop, the security forces opened fire, aiming at her legs.

Video footage of the incident shows the officers, stepping slowly backwards with weapons drawn and pointed directly at her, shouting in Arabic for the woman to stop while she keeps walking steadily towards them.

Several seconds later, a single gunshot is heard, and the woman is seen collapsing to the ground.

The woman was evacuated in moderate condition to Shaare Zedek Medical Center in the capital. No weapon was found in her possession.

An investigation into the incident has been opened.