Hamas and Islamic Jihad movements in Gaza on Saturday evening announced that a ceasefire has been reached brokered by regional and international parties.

According to Safa news agency, Hamas's spokesman Hazem Qasem confirmed that regional and international parties have intervened to end the latest escalation in Gaza which started with a series of Israeli airstrikes on the besieged territory followed by a response by the Palestinian resistance.

For his part, spokesman for the Islamic Jihad Daud Shehab said that his Movement agreed to the agreement at Egypt's request, adding that the ceasefire will start at 8 pm.

He stressed that resistance groups in Gaza will commit to the ceasefire as long as Israel does.

Since the early hours of Saturday, Israeli warplanes have launched over 80 airstrikes on several targets in Gaza. The most heinous attack was the one that hit a building adjacent to a public park in Gaza city killing two children and injuring 25 civilians.

The Palestinian resistance responded by firing dozens of rockets and mortar shells at Israeli settlements neighboring the Gaza Strip. At least 4 Israeli settlers were injured.
Clashes, injuries reported after funeral of Palestinian martyr

Clashes erupted on Saturday afternoon in the wake of the funeral of Martyr Rami Sabarneh, in Beit Ummar town in al-Khalil, leading to the injury of a number of Palestinian youths by live bullets and tear gas canisters.

The media activist Mohammad Awad pointed out that two of the youths were shot by live bullets, at the entrance to the town where the cemetery is located.

The funeral procession kicked off from the town’s Grand Mosque and headed to the cemetery.

The protesters chanted slogans condemning Israeli crimes and violations against Palestinians, and others calling for national unity and returning the bodies of martyrs.
Injuries reported in clashes with IOF

A number of Palestinians were injured on Saturday during clashes that erupted with Israeli occupation forces (IOF) in Asirah al-Qebliya town south of Nablus city in the northern West Bank.

Local sources told the PIC reporter that the clashes broke out after an Israeli guard of Yitzhar illegal settlement in the area had raided the town and started shooting at Palestinian homes.

The sources added that the inhabitants confronted the extremist Jewish settler before IOF soldiers rushed to the site and showered protesters with gunfire and tear gas grenades.

The Israeli shooting has led to the injury of Ammar Abu Hamad, 34, in addition to the injury of many others due to Israeli tear gas.
Israeli Air Force Carries Out Dozens Of Air Strikes In Gaza 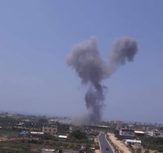 The Israeli Air Force carried out, on Saturday afternoon, dozens of airstrikes targeting sites, reportedly run by armed resistance groups, and the areas around them, in several parts of the besieged Gaza Strip.

The Israeli war jets fired at least four missiles into a center near the Egyptian border, in Rafah, in the southern part of the Gaza Strip, causing serious damage. video video

The Air Force also fired at least three missiles into a Palestinian land, close to the barrier fence, east of Gaza city.

Israeli missiles were also fired into an area in central Gaza, causing property damage, in addition to areas in Beit Lahia, in northern Gaza. video

On his social media accounts, Dr. Ashraf al-Qedra, the spokesperson of the Palestinian Health Ministry in Gaza, has confirmed that the Israeli strikes did not lead to casualties; the statement came after some media agencies reported three injuries.

However, Dr. al-Qedra issued an advisory warning to the Palestinians to refrain from gathering in or near the targeted areas, especially since the air strikes have targeted the same areas more than once.

In addition, armed resistance groups in Gaza said they retaliated to the Israeli strikes by firing fifteen shells into Israeli areas across the border fence.
The Israeli army claimed its fired missiles into a tunnel, reportedly run by al-Qassam Brigades, the armed wing of Hamas. video

Israeli Ynet News quoted the army stating that it targeted Hamas-run sites in response of “renewed violence” on the border Friday, after a soldier was moderately injured, and added that among the targeted areas “are locations where flammable balloons are prepared,” in addition to a “Hamas training camp.”

On Saturday at dawn, the Israeli Air Force carried out five strikes against armed resistance sites in several parts of the coastal region.

In addition, Israeli daily Haaretz said the army “targeted Hamas centers in Gaza after 31 shells were fired from the coastal region overnight.”

It also quoted the Israeli Army spokesperson Ronen Manelis stating that the military struck 40 Hamas centers, in what he called “the biggest daytime attack” since the 2014 “Protective Edge” military offensive on Gaza.

In addition, Haaretz said Israel’s political and military leaders held an urgent meeting, and decided to continue the strikes on Gaza to “break the equation which Hamas called balance of deterrence,” in which Palestinian fighters would fire shells every time Israel attacks Palestinians flying burning kites, yet, it added that the army spokesperson said, “Israel is not interested in escalation.”

It is worth mentioning that the Israeli offensive in 2014 has led to the death of 2,219 Palestinians – most of them are civilians, when the army obliterated 142 families.

On the same day of his injury, the soldiers killed a child, identified as Othman Rami Hallas, 15, from the Sheja’eyya neighborhood, east of Gaza city.

Israeli soldiers invaded, on Friday at night, the town of Ya’bad, southwest of the northern West Bank city of Jenin, and broke into an engagement party after installing a military roadblock in front of the celebration hall.

Eyewitnesses said several army jeeps invaded the town, before installing the roadblock in front of the hall, and started searching cars while investigating the ID cards of the Palestinians, and interrogated many of them.

The soldiers also briefly detained and interrogated the fiancé, and released him later.

Furthermore, the soldiers invaded the home of Mahmoud Abu Ja’far, in the al-Ba’ajwa neighborhood, and interrogated him, while searching the property.
IOF storms Sebastia town, clashes with young men

Violent clashes broke out at dawn Saturday between Palestinian young men and Israeli soldiers after the latter stormed different neighborhoods of Sebastia town, northwest of Nablus in the occupied West Bank.

According to local sources, the Israeli occupation forces (IOF) stormed the town twice within 24 hours.

The IOF showered the angry young men with hails of tear gas and stun grenades during the events in the town.

Sebastia and its archeological area have been exposed recently to repeated wanton raids by the IOF.
Israeli Army Fires Missiles Into Gaza

The Israeli Air Force carried out, on Friday at night, many airstrikes reportedly targeting centers run by armed resistance groups, in the central and northern parts of the Gaza Strip.

The Israeli army claimed it was retaliating to a grenade which was hurled at soldiers operating near the border fence, Friday, moderately wounding a commander, who was rushed to Soroka Medical Center. video

The army said the incident took place in northern Gaza, near the old Karni Crossing, and that the soldiers fired back at the Palestinians, while the Israeli Air Force fired missiles resistance-run centers in the northern and central parts of the coastal region.

The army said its Iron Dome system intercepted at least two shells, fired from Gaza, into the nearby Sderot and Eshkol settlements.

Media sources said the soldiers chased and removed Palestinian journalists, invaded and searched many homes, and occupied several rooftops to use them as firing posts and monitoring towers.

They added that the soldiers also closed the main road in Bab az-Zawiya area, in the center of Hebron city, and fired gas bombs, smoke grenades and rubber-coated steel bullets.

The Health Ministry in Gaza has reported that 137 Palestinians, including 18 children and two women, have been killed by the army in the period between March 30th and July 7th, 2018.

The ministry said the soldiers shot, Friday, the two Palestinians with live fire, and caused dozens of suffer the effects of teargas inhalation in several parts of the coastal region, especially east of Gaza city, in addition to east of Khuza’a, east of Khan Younis, in the southern part of the Gaza Strip.

Earlier Friday, the Health Ministry in Gaza released detailed statistic on the number of Palestinians, who were killed and injured by Israeli army fire in the period between March 30th and last week’s processions, on July 7th, 2018:

Causes of injures: Injuries By Body Part: Injuries that resulted in amputations: Attacks against medical personnel led to the death of two medics, and caused injuries to 320 others.
Attacks against the Press led to the death of two journalists, and caused injuries to 175.
Israeli army fire also caused partial damage to 45 Palestinian ambulances.
Injuries as Israeli soldiers violently disband Qalqilya march

Several Palestinians choked on teargas at noontime Friday in clashes with the Israeli occupation forces in Kafr Qaddum, east of Qalqilya.

Local sources said an Israeli drone fired a missile toward a group of Gazans gathering east of Jabalia town, north of the blockaded Gaza Strip. No injuries were reported.

Another Israeli drone targeted a group of Palestinians northeast of Beit Hanun, north of the Gaza Strip, with two missiles.

The missiles were dropped allegedly in response to kites and incendiary balloons flown from Gaza over recent days.

Incendiary kites and balloons have been launched into Israeli communities bordering the Gaza Strip since the outbreak of the Great March of Return protests, launched on March 30 at the Gaza border to call for Palestinians’ right of return to their motherland.

Gaza has been blockaded by Israel and Egypt for over a decade, preventing vital supplies reaching Palestinians there.

The 11-year-long Israeli blockade has long prevented the Gaza Strip from receiving much needed humanitarian aid, including foodstuff, medical equipment, and clean water.

Since protests began on March 30 at the Gaza border, protesters have been violently disbanded by the Israeli army. At least 139 Palestinians have been killed by Israeli gunfire.

The majority of those killed were non-violent protestors, as well as journalists, bystanders and paramedics. Only a small number were seeking to breach or damage the border fence, although they too were unarmed. No Israelis have been killed.
PPS: “Israeli Soldiers Abduct Seven Palestinians In The West Bank”

The Palestinian Prisoners’ Society (PPS) has reported that Israeli soldiers abducted, on Thursday at dawn, at least seven Palestinians from their homes in several parts of the occupied West Bank.

The PPS identified the abducted Palestinians as:
Army Invades Many Neighborhoods In Jenin