Eye-witnesses said clashes burst out in al-Berka and al-Tel areas, in the Old City, between schoolchildren and heavily-armed Israeli patrols.

The occupation forces showered the area with spates of teargas canisters and acoustic grenades, resulting in several suffocation cases among Palestinian pupils.
Israeli Soldiers Abduct Eight Palestinians, Including A Legislator, In The West Bank 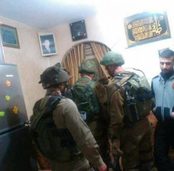 Israeli soldiers invaded, on Thursday at dawn, many Palestinian communities in several parts of the occupied West Bank, violently searched homes and abducted at least eight Palestinians, including a legislator.

The Bethlehem office of the Palestinian Prisoners’ Society (PPS) said the soldiers invaded the home of Legislator Khaled Tafesh, in his fifties, before abducting him.

Tafesh was repeatedly abducted and imprisoned by Israel, including being held for extended periods under Administrative Detention orders, without charges or trial.

Also in Bethlehem, the soldiers invaded the Saff and al-Maslakh streets, searched many homes and abducted Mohammad Waleed al-Hreimi and Issa Nader Awwad.

Among the abducted Palestinians in Bethlehem is Issa Awad, who was previously shot by the army during a military invasion into Bethlehem.

The soldiers also fired gas bombs, concussion grenades and rubber-coated steel bullets at many Palestinians, who protested the invasion and hurled stones at the invaded jeeps.

In addition, the soldiers abducted a young man, identified as Ibrahim Marwan Hanaisha, 26, from Jenin, in northern West Bank, after summoning him for interrogation in Salem military base, west of Jenin.

The abducted Palestinians have been identified as:

The Israeli jets also hit a resistance site in al-Sudaniya, north of the blockaded Gaza Strip, with two missiles.

The Palestinian Health Ministry said a Palestinian was rushed to the Indonesian Hospital in Gaza to be treated for wounds he sustained in his feet.

The occupation army claimed responsibility for air raids on Hamas facilities north of the Gaza Strip.

The strikes targeted resistance facilities and buildings, along with a weapon store.

Five Palestinians including a child were injured on Wednesday in an Israeli attack on a mourning ceremony in Khuzaa east of Khan Younis in the southern Gaza Strip of the Awda martyrs.

The PIC reporter said that Israeli occupation forces (IOF) fired tear gas grenades at thousands of Palestinians who participated in the ceremony which persisted despite the Israeli attack.

The martyrs were killed by the IOF soldiers in the Great March of Return events.
Israeli jets target resistance sites in Gaza Strip

Two other missiles were fired at al-Safina resistance site located to the west of the strip.

Palestinian Health Ministry affirmed that a young man suffered a foot injury during the attack.
16 may 2018
Injuries reported in clashes near Ramallah

A number of Palestinians were injured on Wednesday after the Israeli occupation forces (IOF) quelled a peaceful demonstration near Ramallah.

Local sources reported that clashes erupted at the northern entrance to al-Bireh city north of Ramallah after the IOF quelled a demonstration organized in protest at the US embassy transfer to Jerusalem and the Israeli crimes in Gaza.

They added that the IOF chased a group of Palestinian youths in an attempt to arrest them amid heavy firing of teargas canisters.
Israeli tanks strike resistance posts east of Gaza

The PIC reporter said that two resistance posts were struck by several artillery projectiles east of Jabalia and al-Shuja'iyya neighborhood.

The Israeli attacks caused severe damages in the bombed areas and the surrounding farmlands.

The Israeli occupation army claimed that the attack came in response to shooting attacks launched from the Gaza Strip.
14 may 2018 Land day
14 Palestinians arrested in O.J’lem

Israeli police arrested on Monday 14 Palestinians after attacking a peaceful march organized in occupied Jerusalem in protest against US embassy relocation.

Tight military restrictions were earlier imposed throughout the occupied city prior to the opening ceremony of the US embassy in occupied Jerusalem.

A large protest was organized near the new US embassy building in the occupied city amid the participation of a number of Arab members of the Israeli Knesset.

At least 14 protesters were detained while others were injured during the attack. Palestinian flags were also confiscated by Israeli police.

Tension in the occupied Palestinian territories continue to be high in rejection of the opening of the US embassy in Jerusalem and marking the 70th anniversary of the Palestinian Nakba, or catastrophe.
Israeli airstrikes reported in northern Gaza

Local sources reported that an F-16 warplane fired at least two missiles at two resistance posts and has not left the sky since then.

The site was severely damaged with no casualties reported.
Army Injures Many Palestinians North Of Jerusalem

Hundreds of Palestinians marched from the refugee camp towards the Qalandia terminal, before the soldiers started firing live rounds, rubber-coated steel bullets, gas bombs and concussion grenades at them, while many protesters hurled stones and empty bottles at the army.

The Palestinians marched marking the 70th anniversary of the Palestinian Nakba (Catastrophe) when Israel was created in the historic land of Palestine, and carried Palestinian flags in addition to signs written in several languages.

Media sources in Gaza said the soldiers invaded lands in Khuza’a town, east of Khan Younis, in the northern part of the Gaza Strip.

During the invasion, the soldiers bulldozed the lands and installed sand hills, in addition to firing live rounds at the Return Camps, wounding one Palestinians in Jabalia, in northern Gaza, and one east of Abasan al-Jadida town, east of Khan Younis, in the southern part of the coastal region.

The army also invaded Palestinian lands east of Rafah, in the southern part of the Gaza Strip, and east of al-Boreij, in central Gaza, bulldozed sections close to the border fence, and installed sand hills.

It is worth mentioning that the army has significantly increased its deployment, not only across the border areas in the besieged Gaza Strip, but also various parts of the occupied West Bank, especially in occupied Jerusalem.

The Palestinians will be marking the Nakba Day when Israel was created in the historic land of Palestine, on May 15 1948.

1.4 million Palestinians lived in 1,300 Palestinian towns and villages all over historical Palestine. More than 800,000 of the population were driven out of their homeland to the West Bank and Gaza Strip, neighboring Arab countries, and other countries of the world.

Three Palestinian young men were arrested by the Israeli forces on Sunday evening in Silwan town, south of Occupied Jerusalem.

At the same time, the Israeli authorities extended the remand of the Secretary of Fatah Movement in Occupied Jerusalem, Shadi Matour, until Monday.

Meanwhile, fierce clashes burst out between Palestinian anti-occupation youth and Israeli patrols in Silwan, according to the Wadi Hilweh Information Center.