Local sources told the PIC reporter that dozens of IOF soldiers broke into the house and stayed there for about half an hour.

The sources added that neighbors were able to take photos of two young men handcuffed inside the house. After the IOF withdrew from the area, they found out that the owner of the house Ahmad al-Tayyeb and his three sons Tamer, Abdul-Raouf and Saber were arrested.

A Palestinian youth identified as Mahmoud Abu al-Wafa was injured by a rubber-coated metal bullet to the leg during clashes in Jenin camp following the IOF raid.

The PIC reporter said, quoting local sources, that the IOF soldiers heavily fired rubber-coated metal bullets and teargas canisters at Palestinian citizens as they were withdrawing from the camp.

Al-Wafa was transferred to a local hospital for treatment, while a number of Palestinian citizens suffered breathing difficulties as a result of inhaling teargas.
Israeli gunboats attack fishermen in Gaza waters

Israeli gunboats on Wednesday morning attacked Palestinian fishermen and their boats off the coast of the besieged Gaza Strip.

According to local sources, gunboats opened machinegun fire at and chased fishing boats off the shores of as-Sudaniya and al-Waha areas, northwest of Gaza.

The Israeli navy attacked the fishermen as they were working within the permitted fishing zone, which Israel had reduced recently from six to three nautical miles.

Other fishing boats were also exposed to a similar attack by the Israeli navy off the shore of central Gaza.

Israeli gunboats are around Gaza fishermen almost every day, harassing them, shooting at them, damaging their boats, and making arrests. Sometimes fishermen are injured or killed during gunfire attacks.

Under the 1993 Oslo accords, Palestinian fishermen are permitted to fish up to 20 nautical miles off the coast of Gaza, but since then Israel has kept reducing the fishing area gradually to a limit of three nautical miles as part of its blockade on Gaza.

Fishermen and human rights groups also say that, since the 2008-09 war in Gaza, the Israeli army has been regularly enforcing a limit even closer to the shore.
IOF storms towns in Nablus

The Israeli occupation forces (IOF) at dawn Wednesday stormed the towns of Asira ash-Shamaliya and Asira al-Qibliya in Nablus province, with no reported arrests.

The IOF also stormed Asira al-Qibliya town and flew a drone over its homes to take aerial images.

Earlier on Tuesday afternoon, violent clashes broke out between local young men and a horde of Jewish settlers after the latter stormed a neighborhood in Asira al-Qibliya town and hurled stones at homes and cars.

Jewish settlers attacked, on Tuesday, Palestinian homes in the northern West Bank village of Assira al-Qibliya, and set farmland on fire, according to Ghassan Daghlas, who monitors settlers’ activities in the north of the West Bank.

He said that residents rushed to defend their homes and land but the Israeli army intervened, to protect the settlers, and confronted the residents, shooting at them to keep them back.

Residents also physically confronted the soldiers, as well as the settlers, he said.
Palestinians injured in settler attack near Nablus

A number of Palestinian citizens were injured Tuesday during clashes with Israeli settlers in Asira al-Qibliya village south of Nablus.

Eyewitnesses said that the settlers attacked the Palestinian citizens under the protection of Israeli soldiers.

Head of Asira al-Qibliya village council Hafez Saleh said that over 30 Israeli settlers from Yitzhar settlement, built by force on privately-owned Palestinian lands, entered the village and hurled stones at a number of houses and vehicles causing some damages.

Saleh added that clashes erupted between the settlers and Asira al-Qibliya families before the Israeli occupation forces stormed the area amid heavy firing of live ammunition and teargas canisters. A number of Palestinians suffered breathing difficulties.
IOF opens fire at Palestinian farmers in Gaza

Palestinian medical sources have confirmed, Tuesday, that two young men were injured by a missile fired by an Israeli done in northern Gaza.

The Israeli army said it targeted Palestinians, reportedly flying burning kites from an area near the Eastern Graveyard, east of Jabalia in northern Gaza.

Israeli Ynet News said one of the “incendiary balloons, landed at a school,” in the Eshkol Regional Council of Settlements.

During an assessment meeting with the army’s Gaza Division, including Defense Minister Avigdor Lieberman, Army Chief of Staff Gadi Eisenkot, Shin Bet Director Nadav Argaman, and National Security Advisor Meir Ben Shabat, Israeli Prime Minister Benjamin Netanyahu said his government is prepared for any scenario in the Gaza Strip, and that it will do whatever it can to resolve the situation along the border.

On Saturday evening, July 14th, the Israeli Airforce carried out, on Saturday evening, several airstrikes targeting Gaza, killing two children and wounding at least twenty-five Palestinians in Gaza city, when the missiles struck a building next to a public green park, filled with people.

The sources said the Palestinian Sari Daoud Shobaki, 24, was shot during the Great Return March, when the soldiers and army snipers resorted to the excessive use of force against the nonviolent Palestinian protesters, killing sixty Palestinian on the day alone, and wounding more than 2700 others, including hundreds who suffered serious wounds; many of them later died from their wounds.

The Health Ministry in Gaza said the Israeli missiles killed Amir an-Nimra, 15, and his friend Luay Kahil, 16, in addition to causing injuries to at least 25 other Palestinians.
Israeli Army Carries Out A Limited Invasion Into Southern Gaza 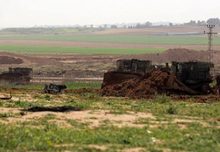 Media sources said the Israeli vehicles came from Kissufim military base, across the border fence, and advanced dozens of meters into the Palestinian lands.

They added that several Israeli surveillance drones flew over the invaded area.

The invasion is part of ongoing Israeli violations against the Palestinians agricultural lands and farmers, near the border fence, in addition to attacks targeting fishermen in Gaza territorial waters.

Israeli military bulldozers on Tuesday morning moved dozens of meters into the southern corners of the blockaded Gaza Strip at the same time as Israeli naval forces attacked fishermen in the enclave.

The bulldozers leveled Palestinian lands along the border.

Israeli military incursions near the border fence separating Gaza from territories occupied in 1948 have long been a near-daily occurrence.

The Israeli army regularly detains and opens fire on unarmed Palestinian fishermen, shepherds, and farmers along the border areas.

According to Days of Palestine, the Israeli occupation state is the first country to use the US-made F-35 fighter jet to kill people –two innocent Palestinian children in Gaza Strip.

While America and the rest of the world’s attention was focused on the Wold Cup, Wimbledon, Trump’s visit to England, and the Stormy Daniels story, Israel unleashed the heaviest air strikes since 2014, on the besieged Gaza Strip.

This makes Israel the first country in the world to use the new US-made F-35 fighter jets to kill people.

According to the Palestinian Ministry of Health, Israeli airstrikes, on Saturday, injured hundreds of civilians, killing two Palestinian boys Louay Khoheel, aged 16, and Amir al-Namara, also 16, who were at a public park next to an unfinished building.

A few hours later, Amir and Louay’s parents visited the morgue to claim their bodies.

In Ramallah, violent clashes broke out after IOF broke into Abu Shkheidam to the north and Al-Quds Street south of the city.

Heavy live and rubber bullets were fired during the clashes amid an excessive use of teargas bombs.

Similar raids were carried out in Beit Umar town in al-Khalil, where IOF confiscated $ 1,300 from a local house under flimsy pretexts.

In a statement issued early today, Israeli army claimed that 16 “wanted” Palestinians were detained for being involved in anti-occupation activities.

Weapons and tens of thousands of shekels were found during the raids, the statement added.

In Nablus, four young men were rounded up from their family houses including an ex-prisoner who was released only three weeks ago.

Seven other youths were detained in al-Khuder town south of Bethlehem.
4 Palestinians kidnapped by IOF from Nablus

Clashes flared up between Israeli soldiers and Palestinian anti-occupation youth.