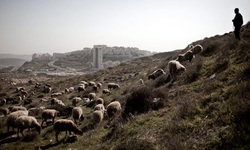 The Israeli army continued its attacks against Palestinian farmers and shepherds along Gaza’s borderline, Sunday, according to WAFA correspondence.

Witnesses reported that Israeli soldiers, stationed at watchtowers along the borderline area to the east of Gaza, opened heavy machine gunfire on farmers and shepherds in the region.

A few hours earlier, the Israeli occupation authorities unblocked the passageway to Ourata town after they had sealed it off for two days.

Israeli soldiers kidnapped, on Saturday at dawn, five young Palestinian men, after attacking them near one of the gates of the Al-Aqsa Mosque, in occupied Jerusalem, and injured several others in a nearby area.

Silwanic added that the soldiers assaulted the kidnapped Palestinians with clubs and batons, in addition to spraying their faces with pepper-spray.

They were standing near one of the gates of the Al-Aqsa Mosque, before dawn prayers, when the soldiers assaulted them.

Some of the wounded Palestinians have been identified as Hatem al-Mhalwes, ‘Aahed al-Rishiq, Ramadan Seder, Arafat Seder and Tha’er Seder; they were moved to the al-Makassed hospital for treatment.
Mentally disabled Palestinian shot, injured in Nablus

A Palestinian, who locals said is mentally disabled, was shot and injured after allegedly attempting to stab Israeli soldiers in the northern West Bank district of Nablus on Friday afternoon.

Israeli media sources claimed that a Palestinian man tried to carry out a stabbing attempt at Awarta checkpoint at the entrance to the city of Nablus, before being “neutralized”.

No Israelis were injured in the alleged stabbing attack.

According to the PIC reporter, Israeli occupation forces (IOF) refused to allow Palestinian ambulance crews to transfer him to hospital despite his serious injuries. Local sources identified the injured man as Khaled al-Qadhi, 26.

The sources added that al-Qadhi had been detained by the IOF on several occasions in the past, before being released after they determined that he was mentally disabled.

Israeli forces were deployed around Nablus and closed several checkpoints in the area. Two unidentified young men were also arrested at Awarta checkpoint and taken handcuffed to an Israeli detention center.

More than 200 Palestinians have been killed by Israeli soldiers since the outbreak of Jerusalem Intifada in October 2015.
Yatta town under tight military blockade for second day

The Israeli occupation army on Friday continued to completely beleaguer, for the second day, about 120,000 Palestinian citizens in Yatta town, south of al-Khalil city.

According to municipal chief of the town Mousa Makhamreh, all the entrances and roads to the town had been blocked since Thursday with mounds of dirt and rocks.

"The closure of the town's entrances with dirt mounds would make things more difficult … If they were closed with military barriers, there would be a possible chance for negotiation for emergency cases such as the transport of patients," Makhamreh stated in press remarks on Friday.

He said that the Israeli occupation forces had carried out several raids on homes and arrests over the past two days in the town. Four Israelis were killed and several others were wounded last Wednesday when two residents of the southern West Bank town of Yatta carried out a shooting attack in a popular cafe in Tel Aviv.

On Thursday, the Israeli government started implementing sweeping measures to beef up security and restrict movement of Palestinians in what observers say is mass punishment. Within hours of the attack, the Israeli authorities revoked travel permits issued for 83,000 Palestinians from both the West Bank and Gaza Strip for the holy month of Ramadan and embarked on sealing off Yatta.
Israeli Army Attacks Weekly Protest In Kufur Qaddoum
In related news, the soldiers injured a young man near Awarta roadblock, southeast of the northern West Bank city of Nablus.

Eyewitnesses said Hasan Khaled al-Qadi, 26, was shot while riding his bicycle, and suffered a serious injury, before he was moved to an Israeli hospital.
10 june 2016
Israeli Soldiers Kidnap Six Palestinians In Hebron 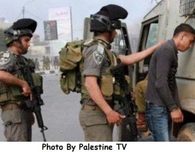 The soldiers also kidnapped Ibrahim Makhamra, after searching his home and took its measurements, threatening to demolish it within 24 hours.

Another Palestinian from Yatta was kidnapped from his work in Jerusalem. He has been identified as Mohyeddin Abu Fannar.

Local sources said that dozens of soldiers surrounded the town before invading many of its neighborhoods, especially Roq’et al-Khalla, al-Heela, Khallet al-May and Reef, and violently searched many homes causing excessive damage.

In addition, the soldiers invaded Beit ‘Amra area, in Yatta town, and kidnapped Ismael Ed’eis after violently searching his home.

In Hebron city, the soldiers invaded the home of Ramadan al-Qawasmi, and kidnapped him, after searching his property. Al-Qawasmi is a student of the Al-Quds Open University.

The army also invaded and searched homes in Sa’ir town, north of Hebron, and fired many flares and sound bombs.
Army Kidnaps Six Palestinians In The West Bank 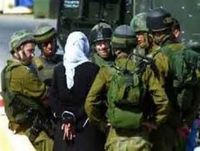 Israeli soldiers invaded, on Friday at dawn, dozens of homes in the West Bank districts of Qalqilia, Ramallah, Jerusalem, Bethlehem, and Tubas, and kidnapped six Palestinians, including one woman.

The Palestinian Prisoners Society (PPS) has reported that the soldiers invaded Qalqilia city, in the northern part of the West Bank, and kidnapped a woman, after storming her home, looking for her son, who was not there during the attack.

The invasion led to clashes between the soldiers and local youths; the army fire many gas bombs and concussion grenades.

In addition, the soldiers kidnapped a young man, identified as Odai Asfour, after invading and searching his family’s home, in Sinjel town, in the central West Bank district of Ramallah.

The soldiers also invaded Budros town, west of Ramallah, and drove around its neighborhoods, before withdrawing without conducting any arrests.
The PPS also said that the soldiers kidnapped two young men, identified as Mohammad Sbeih and Nader al-Basha, after the army invaded and violently searched many homes, in Hizma town, northeast of occupied Jerusalem.

Clashes also took place in Bab Hatta area in Jerusalem, and Abu Dis nearby town, after the soldiers invaded them. The army fired many concussion grenades and gas bombs, causing many Palestinians to suffer the effects of teargas inhalation.

The soldiers also fired many gas bombs and concussion grenades during the invasion, no injuries were reported.

Furthermore, the soldiers invaded Tubas city, and kidnapped one Palestinian, identified as Ahmad Kamal Daraghma, 22, after storming his home and violently searching it.
9 june 2016
2 Palestinians injured, lands burned down as IOF storms Nablus

Two Palestinians choked on teargas on Wednesday evening during clashes with the Israeli occupation forces (IOF) in Qasra town, in Nablus.

Member of the anti-settlement committee in Akraba town, Youssef Diriyeh, said clashes burst out in Qasra after the IOF seized an agricultural tractor owned by a Palestinian farmer.

Meanwhile, wildfires burst out in Nablus’s western town of Gibt after the IOF rolled into the area and unleashed random spates of light bombs.

Eyewitnesses said IOF soldiers stormed the town at nine p.m. and checked Palestinians’ IDs. Local inhabitants said dozens of acres of cultivated land and crops were reduced to ashes after the IOF prevented them from putting out the fires.
8 june 2016
Palestinian Security Guard Hit by Israeli Police Vehicle inside Al-Aqsa Compound

Eyewitnesses explained to Ma’an News Agency that the guard, identified as Luay Abu al-Saad, was standing between the compound’s Chain Gate and the Cotton Merchants Gate when a small Israeli police vehicle touring the compound hit him.

Abu al-Saad was taken to a clinic inside the compound, for first aid treatment, before an ambulance from the Palestinian Red Crescent evacuated him to a hospital.

Medics said that his leg had been hurt.

Palestinian Red Crescent spokeswoman Errab Foqoha confirmed to that the accident took place on Wednesday morning, adding that Abu al-Saad had been transferred to the al-Makassed hospital in Jerusalem. Foqoha said she could not confirm the condition of the security guard.
7 june 2016
Israeli Army Settles Palestinian Homes

Dozens of Israeli soldiers occupied at least ten Palestinian houses in the center of the village. Soon after, Israeli soldiers built fences and installed security cameras around the confiscated homes.

A local committee in the village expressed grave concern about the military’s fortified presence. The military takeover will no doubt disrupt the ability of Hawwara’s 10,000 residents to move about their own village with any sense of safety or freedom.

According to Ma’an News Agency, an Israeli army spokesperson described the outposts as “temporary viewpoints in the area to overlook the road for security measures.”

The Israeli army claims that the new military outposts are a consequence of Palestinian attacks against Israeli settlers along the main road of the town, though no Israelis were injured at the time of the supposed attacks.

The road that runs through Hawwara is used regularly by many settlers living on occupied land in the surrounding area.

An Israeli officer told residents that Israeli authorities will not hesitate to double-down on the occupation of Huwwara if the alleged attacks continue.
Army Kidnaps A Palestinian, Issues Demolition Orders Against Two Sheds, In Bethlehem

The soldiers invaded Beit Fajjar, before breaking into and searching a few homes, and kidnapped Mohammad Ja’far Taqatqa, 25.

The invasion led to clashes between the soldiers and local youths, who hurled stones on the military vehicles, while the army fired gas bombs and concussion grenades.

In addition, the soldiers invaded Rashayda village, east of Bethlehem, and handed demolition orders targeting two barns, allegedly for being built near a “military zone.”

Local sources said the orders were handed to Ali Odah and Farhan Ali Rashayda, and that the two residents use the sheds to for their sheep in this grazing area.
Fawwaz Rashayda, the head of the Rashayda Village Council, said the soldiers have been targeting the shepherds in this area, known as Rajm an-Naqa, and that the barns are located in Palestinian lands that were declared by the army as a closed military zone.