A Palestinian youth was seriously wounded on Wednesday, at dawn, after being rammed by an Israeli military jeep in Balata camp, northern occupied West Bank.

Palestinian medics said that the youth is hospitalized, in serious condition, at Rafedia hospital.

WAFA further reports that Israeli forces raided the nearby refugee camp of Askar, as well, in addition to the Nablus village of Kafr Qalil, detaining at least two Palestinians.
Limited Israeli incursion east of Rafah

Israeli Occupation Forces (IOF) on Wednesday advanced into Palestinian lands to the east of Rafah, in southern Israeli-besieged Gaza Strip, and leveled lands amid hovering of army choppers.

Local sources told Quds Press that four Israeli military bulldozers advanced into lands to the east of Rafah for a limited distance estimated at 70 meters.

Four Israeli military vehicles were stationed at the military gate north of Rafah while two bulldozers and a huge military digger advanced into the border line near al-Farahein area amid hovering of army choppers, the sources added.

The Israeli army moved a number of diggers, which were working inside the security fence in 1948 Occupied Palestine, to eastern Rafah where digging works are taking place inside the fence, a field observer told Quds press.

The Israeli incursions at the Gaza border areas are conducted on a semi-daily basis leading to casualties and big losses among locals.

The attack is another episode in the series of Israeli violations of the Cairo-brokered truce accord signed on August 26, 2014 in the wake of the Israeli aggression on the besieged coastal enclave, which killed over 2,300 Palestinians, mostly civilians.
Israeli navy detains 10 Gaza fishermen

Ten fishermen, who were on the confiscated boats, were arrested during the attack, Ayyash added. Ayyash affirmed that the fishermen were sailing within the six-nautical-mile fishing zone imposed as part of Israel’s naval blockade.

On Tuesday night, an Israeli airstrike hit an agricultural area in Juhr Addik village in the southern Gaza Strip. No casualties were reported.

The Israeli army regularly open fire on Palestinian fisherman and farmers at sea and along the border areas, despite a ceasefire agreement that ended the Israeli 2014 war on the enclave.
12-year-old Palestinian among several injured in IOF sweep

A number of Palestinian civilians were injured and others were arrested by the Israeli occupation forces (IOF) in an abduction sweep launched across the West Bank at dawn Wednesday.

The Israeli occupation army claimed responsibility for the abduction of 12 allegedly wanted Palestinians at the crack of dawn, 11 among whom arrested on allegations of anti-occupation activism.

The campaign targeted the West Bank provinces of Nablus, Qalqilya, Ramallah, and Bethlehem. A Palestinian citizen choked on teargas in Qlaqilya during clashes with the IOF in al-Nakar neighborhood.

According to a PIC news correspondent, heavily-armed IOF patrols rolled into the area at predawn time and attacked the Palestinians with heavy spates of teargas canisters and stun grenades, resulting in several suffocation cases.

The IOF soldiers wreaked havoc on civilian homes before they kidnapped four Palestinians, including the lecturer at the Islamic University Bilal Hanun. Nablus-based sources also said the Palestinian youth Saleh Abu al-Anad sustained injuries in the Balata refugee camp after he was hit by an Israeli patrol jeep.

The injured youth was later evacuated to the Rafidia hospital for urgent treatment. The IOF kidnapped another youth from the Askar refugee camp shortly after they stormed the area and ravaged civilian homes. Youngster Younes Kuni was also kidnapped from his family home in Kfar Kalil village, to the south Nablus.

The campaign culminated in the abduction of four Palestinians from the southern West Bank province of al-Khalil.

A 12-year-old Palestinian child sustained injuries in his face shortly after the IOF raided Yatta town and showered the area with rubber bullets.

The occupation soldiers in 30 army jeeps further rolled into al-Hila neighborhood, in Yatta, and broke into the home of prisoner Khaled Muhammad Mussa Mukhamreh, who carried out a shooting attack in Tel Aviv on June 8.

The IOF notified the projected demolition of the Mukhamreh family home on June 20.

The IOF soldiers have been cordoning off Yatta town for over a week’s time as part of a policy of collective punishment against Palestinian anti-occupation youths and their families. Four more Palestinians were kidnapped by the IOF following assaults on Ramallah and Bethlehem provinces.
14 june 2016
Israeli warplanes hit agricultural land east of Gaza

At least one rocket landed in an agricultural land near the border fence, causing severe material damage.

No initial casualties were reported.

The attack came as part of Israeli near-daily violations of the ceasefire agreement reached on August 26, 2014 between Palestinian resistance and Israel to end its 51-day aggression on Gaza.
13 june 2016
Army Tightens Siege On Yatta Town, South Of Hebron

Dozens of Israeli soldiers invaded, on Monday at dawn, many Palestinian homes in Yatta town, south of the southern West Bank city of Hebron, and searched many homes, before the army tightened the siege that was imposed on the town several days ago.

The soldiers invaded Yatta from several directions, before advancing into its neighborhoods, and then broke into many homes, and violently searched them.

They interrogated many Palestinians while searching their homes, especially in Roq’a area, Zeev and Susiya junctions.

Rateb Jabour, the media coordinator of the Popular and National Committee in Hebron, said the soldiers caused excessive property damage to some of the invaded homes, including those belonging to Mazen Yousef Jabour, Mohammad Khaled Issa Jabour and Ali Ismael Aqel.

The soldiers deliberately caused damage to windows, doors and furniture in the invaded homes, Jabour added.

The army also closed the town’s entrances with sand hills, and even blockaded roads between several neighborhoods, just one day after the soldiers opened them.

Yatta has been subject to constant invasions and collective punishment after the deadly shooting attack in Tel Aviv, on Wednesday evening, leading to the death of four Israelis, as the shooters, who were arrested by the police after the attack, are from the town.

The two shooters are cousins in their early twenties; one of them was arrested and taken in for questioning, while the other, who was injured, was also arrested and taken to a hospital.
Israeli Soldiers Kidnap Three Palestinians In Bethlehem 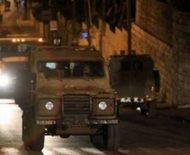 The soldiers invaded the town through its western part, and were largely deployed in the Western Neighborhood and Sahlet Eid area, before storming and searching many homes, and kidnapped three young men.

The soldiers also fired several gas bombs, and concussion grenades, before withdrawing from the town.
Israeli Army Kidnaps A Palestinian Legislator In Hebron 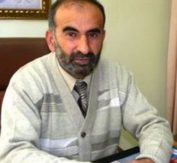 Israeli soldiers kidnapped, on Sunday at dawn, a Palestinian legislator from his home, in Surif town, northeast of the southern West Bank city of Hebron.

The Palestinian Prisoners Society (PPS) said the soldiers invaded the home of legislator Samir al-Qadi, 59, and abducted him after violently searching his property, causing damage.

In addition, many residents suffered the effects of tear gas inhalation in Yatta, after the soldiers attacked Palestinians protesting the closure of their town, especially after the soldiers placed sand hills blocking various roads.

The abduction of al-Qadi raises the number of imprisoned elected legislators to nine.

Al-Qadi has previously been repeatedly kidnapped and imprisoned for many years, including being held under Administrative Detention orders, without charges or trial.

It is worth mentioning that the Israeli army has kidnapped, over the last two days, at least 36 Palestinians, in different parts of the occupied West Bank, including Jerusalem.
Army Kidnaps Fifteen Palestinians In The West Bank

﻿The Palestinian Prisoners Society (PPS) has reported that Israeli soldiers kidnapped, on Monday at dawn and late at night Sunday, at least fifteen Palestinians in different parts of the occupied West Bank.

Furthermore, the Nablus office of the PPS has reported that the soldiers kidnapped two Palestinians, identified as Khobab Marwan Hamad, from the al-Ma’ajeen neighborhood, and Wajdi Qotob, 26, in Tal area.

In related news, dozens of olive trees, and large areas of agricultural lands were burnt after Israeli soldiers fired flares into Palestinian lands, in Qalqilia.
Palestinian firefighters and civil defense teams rushed to the scene, and eventually managed to control the fires that already consumed more than 100 Dunams of farmlands, and fifty olive trees.

One of the challenging factors in controlling the fires was that the lands are isolated behind the Annexation Wall.
On Sunday at dawn, the soldiers kidnapped a Palestinian legislator, identified as Samir al-Qadi, 59, from his home, in Surif town, northeast of the southern West Bank city of Hebron.
Updated From: Israeli Soldiers Kidnap Eight Palestinians In The West Bank; Cause Fires In Farmlands

Israeli Soldiers Kidnap Eight Palestinians In The West Bank; Cause Fires In Farmlands

Israeli soldiers have kidnapped, late on Sunday at night and on Monday at dawn, eight Palestinians in various districts in the occupied West Bank, including Jerusalem. The army also fired many flares, causing fires in 50 Dunams of Palestinian lands near Hebron.

The soldiers invaded a carwash facility and a garage, owned by Naseef family, in the southern neighborhood of the northern West Bank city of Tulkarem, and violently searched them before kidnapping two Palestinians.

Local sources said the kidnapped Palestinians have been identified as Raed Fathallah Naseef and Nihad al-Edreesi.

In addition, the soldiers kidnapped one Palestinian, identified as Waleed Zayyat, near Azzoun Atma village, south of Qalqilia, in the northern part of the West Bank.

Another Palestinian, identified as Wajdi a-Qutub, from Tal area, in the northern West Bank city of Nablus, was kidnapped was kidnapped after the army invaded the al-Ma’ajeen neighborhood in the city.

In addition, the soldiers invaded Yatta town, south of the southern West Bank city of Hebron, and kidnapped Shaher Mousa Abu Rabea’a 40, after searching his home.

The soldiers also invaded homes in Hebron city, and kidnapped one Palestinian, identified as Khabbab Hamad.

The soldiers also invaded Jabal al-Mokabber town, in occupied Jerusalem, and kidnapped two young men, after storming their homes and searching them.

Also in Jerusalem, clashes took place in the al-’Ezariyya town, after several army vehicles invaded it.

In related news, dozens of olive trees, and large areas of agricultural lands were burnt after Israeli soldiers fired flares into Palestinian lands, in Qalqilia.
Palestinian firefighters and civil defense teams rushed to the scene, and eventually managed to control the fires that already consumed more than 100 Dunams of farmlands, and fifty olive trees.

One of the challenging factors in controlling the fires was that the lands are isolated behind the Annexation Wall.