Israeli forces Friday opened live ammunition during clashes with Palestinians near al-Bureij refugee on the eastern borders of the besieged Gaza Strip, injuring a 16-year-old Palestinian.

A spokesperson said that the 16-year-old was shot and injured in the stomach when clashes erupted between Israeli forces and Palestinian youth near the security border between the small Palestinian territory and Israel.

The youth was transferred to Shuhada Al-Aqsa hospital, the spokesperson added.

Israeli snipers were deployed on dirt mounds on the eastern borders of the besieged enclave during the clashes, and opened live fire at a group of more than 50 Palestinian youths.

According to a Ma’an reporter on the scene, the clashes were continuing as of 7 p.m. on Friday as Israeli forces have continued to shoot tear gas canisters into the Palestinian territory. A number of Palestinian ambulances are also reportedly on the scene.

An Israeli army spokesperson told Ma’an she would look into reports on the clashes.

The borders between Gaza and Israel are often the site of violent clashes as Palestinians in Gaza have continued to protest the decade-long Israeli-imposed siege on the small territory. Rights groups have pointed out that the siege has crippled Gaza’s economy, while the UN has warned that the enclave would become uninhabitable by 2020 if Israeli authorities continue their refusal to lift the blockade.

Witnesses reported that gunshots were heard early Friday morning in northern Gaza as Israeli boats opened fire at fishermen off the coast of al-Sudaniya.

No injuries were reported and fishermen were forced to flee back to shore.

The practice has in effect destroyed much of the agricultural and fishing sector of the blockaded coastal enclave.
5 Injuries reported after clashes erupted in O. Jerusalem

Five Jerusalemite people were injured and treated in the field after clashes with Israeli forces erupted Friday at Hetta gate in the Old City of Occupied Jerusalem.

Local sources revealed that Israeli forces assaulted a Palestinian man from al-Razem Jerusalemite family along with his wife while going out of the Aqsa Mosque. The forces used pepper spray at the family triggering clashes.

The Israeli occupation forces (IOF) at daybreak Friday rolled into Shaqba town, near the central West Bank province of Ramallah and al-Bireh.

According to local sources, Israeli army troops broke into Bethlehem’s eastern town of Tekou’ and wreaked havoc on civilian homes before they summoned five youngsters to questioning.

Overnight, the IOF ravaged civilian homes near Othman Ibn Affan Mosque, to the east of Bethlehem, and summoned a Palestinian youth—Islam Abiyat—to interrogation.

Recently, the occupation army stepped up arbitrary assaults on Palestinian towns and villages and crack downs on civilians in an attempt to suppress anti-occupation activism across the Palestinian territories.
2 feb 2017
Israeli naval forces open fire on Gaza fishermen for 2nd time in same day

Israeli forces opened live fire at Palestinian fishing boats off the coast of northern Gaza for the second time on Thursday.

Head of the fishermen union, Zakariya Bakr told Ma’an that Israeli naval ships opened fire at Palestinian fishing boats off the coast of northern Gaza City. No injuries were reported.

Israeli naval boats had also opened fire at fishermen of the coast of Beit Lahiya on Thursday morning, while Israeli forces opened fire at Palestinian farmers in the eastern Gaza Strip.

An Israeli army spokesperson told Ma’an she would look into reports on the incident.

The practice has in effect destroyed much of the agricultural and fishing sector of the blockaded coastal enclave.
Israeli forces open fire at Palestinian fishermen, farmers in Gaza

Israeli forces opened live fire at Palestinian lands east of Gaza city, while Israeli naval forces also opened fire on fishermen off the coast of Beit Lahiya in the northern part of the besieged enclave on Thursday morning.

Witnesses told Ma’an that Israeli forces stationed behind the border fence between Gaza and Israel opened live fire at Palestinian farmers. No injuries were reported.

Witnesses also told Ma’an that Israeli forces opened live fire at fishermen off the coast of Beit Lahiya, without any injuries being reported.

An Israeli army spokesperson told Ma’an she would look into reports.

The practice has in effect destroyed much of the agricultural and fishing sector of the blockaded coastal enclave.
Violent clashes with Israeli soldiers east of Nablus

Eyewitnesses told the Palestinian Information Center (PIC) that violent clashes broke out with Israeli soldiers in the neighborhood and expanded to an area between the old and new refugee camps of Askar.

During the skirmishes, the IOF closed the main entrance to Azmout village near the new Askar camp and arrested a young man from Balata refugee camp after intercepting his car, the eyewitnesses added.

The PIC reporter quoted eyewitnesses as saying that Israeli forces opened the border water dams which led to drowning the neighbouring crops.

Gaza border areas have long been a near-daily target to Israeli forces, as unarmed Palestinian farmers and agricultural lands have been regularly attacked by Israeli gunfire.

Such attacks in effect destroyed much of the agricultural sector of the blockaded coastal enclave, leaving dozens of residents homeless.
1 feb 2017
Army Abducts A Former Political Prisoner Near Ramallah

The soldiers abducted No’man Hamed, 21, after detonating the main door of his family’s home, and searched the property, causing excessive damage.

Hamed’s mother said the soldiers interrogated the family while searching the property, and abducted her son, who was previously a political prisoner, held by Israel for eleven months.

It is worth mentioning that the family is living in a new property, after its home was detonated and destroyed by the army, when the soldiers accused their other son, Moath Hamed, of carrying out a shooting attack against them.

In addition, the soldiers surrounded the family homes of Abdul-Fattah Basman Hamed, 17, and Saleh Husam Hamed, 18, and searched their surroundings before withdrawing from the town.

The two Palestinians are currently held by Israel under interrogation, after the soldiers abducted them from their homes, last week.
31 jan 2017
Israeli forces fire at Gaza farmers, fishermen 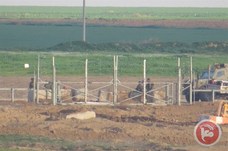 Witnesses said that Israeli military vehicles stationed near the Sufa military post fired towards Palestinian farmers tending their crops between the cities of Khan Yunis and Rafah.

Meanwhile, Israeli navy ships fired in the direction of Gazan fishermen off the coast of Rafah, forcing them to sail back to shore.

Gazan fishermen, whose numbers are estimated to be around 4,000, have suffered from the near decade-long siege of the Gaza Strip, which limits their fishing to just six nautical miles into the sea in accordance with the ceasefire agreement signed with Palestinian factions in 2014.

Earlier this month, a Palestinian fisherman went missing after an encounter with Israeli forces off the coast of Gaza, with his family announcing his death days later despite his body having yet to be recovered.

Meanwhile last week, Israeli aircraft flew the Palestinian side of the “buffer zone" on the outskirts of the Khan Yunis, spraying Palestinian farmlands with weed killers.

Agronomist Wael Thabet of the Gaza Ministry of Agriculture told Ma’an that the excess spray can travel up to 1,200 meters through the air away from the buffer zone, burning crops and causing farmers huge economic losses. He added that the farmlands near the border area constitute about one third of the agricultural space in the besieged coastal enclave.
Arrests, crackdowns as Israeli army rolls into Qalqilya at daybreak

Arrests and crackdowns were reported at daybreak Tuesday after the Israeli occupation forces (IOF) rolled into the northern West Bank province of Qalqilya and showered Palestinian homes with teargas canisters.

The Palestinian anti-occupation protesters reportedly responded to the attack by hurling stones at the Israeli patrols.

The occupation soldiers further broke into a residential apartment in the area and kidnapped 23-year-old youngster Ahmad al-Barsh after they wreaked havoc on his family home.

The arrestee was reportedly dragged by the IOF to an unidentified destination.

Local sources told the PIC reporter that the IOF troops rounded up Adnan Daoud, a Palestinian man from Qalqilya, opened fire at his car and confiscated it under the pretext of not stopping at the checkpoint.

Israeli forces arrested the Palestinian man Ahmad al-Qaisi, from Jammain town while he was passing through a military checkpoint erected at the northern entrance of Salfit city. He was taken to an unknown destination.

Dozens of Israeli soldiers, and undercover officers, invaded on Monday at dawn, the northern West Bank city of Jenin, and Jenin refugee camp, before breaking into stores and homes, and confiscated several surveillance tapes.

The soldiers invaded the city and its refugee camp from various directions, while undercover officers infiltrated several neighborhoods and alleys, before stopping and interrogating many young men, while investigating their ID cards.

The soldiers fired many live rounds, rubber-coated steel bullets and gas bombs, during clashes with many youngsters, who hurled stones and empty bottles on them.

On Sunday, the soldiers invaded Jenin refugee camp, and killed a young man, identified as Mohammad Abu Khalifa, 19, in addition to wounding at least two others.