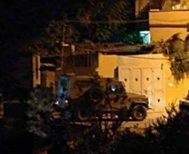 A large military force invaded, on Sunday evening, Beit Fajjar town, south of the West Bank city of Bethlehem, before surrounding and isolating it, reportedly after shots were fires at Migdal Oz nearby illegal colony.

The soldiers initiated extensive searches in Beit Fajjar, reportedly looking for a car that sped into the town after its occupants fired several live rounds at the colony.

Local sources in Beit Fajjar said the shot were fired at a concrete military observation tower.

The soldiers also invaded and searched a gas station in the area, and confiscated surveillance recordings.

Furthermore, the army placed concrete blocks on the western entrance of the town, completely shutting it down.

In addition, the dozens of soldiers were deployed around Beit Fajjar, before stopping and searching dozens of Palestinian cars, and interrogated many citizens, while inspecting their ID cards. video
Israeli Soldiers Abduct Two Children, A Young Man, In Hebron

Israeli soldiers abducted, on Sunday evening, two Palestinian children, and a young man, in two separate incidents in Hebron city, in the southern part of the occupied West Bank.

Media sources in Hebron said the soldiers abducted the two children, who remained unidentified at the time of this report, in the al-Hareeqa area, near the illegal Keryat Arba’ Israeli colony.

The Israeli army claimed that the two children burnt a fire near the fence of the illegal colony.

In addition, the soldiers stationed at Abu ar-Reesh military roadblock, near the Ibrahimi Mosque in Hebron city, abducted a young man while walking back to his home, after they forced him to undress while searching him, and insisted that he removes all of his clothes.

The Palestinian, known to the soldiers who are permanently deployed in the area, refused to be mistreated this way, and the soldiers decided to detain him.
24 june 2018
Ministry of Health: 131 Palestinians Killed, Over 14 Thousand Injured in Great March of Return

The Palestinian Ministry of Health (MOH) in Gaza has issued an updated count of Palestinian casualties since the “Great March of Return” began on March 30th, in the besieged Gaza Strip.

The Ministry announced, late Sunday, that the total number of Palestinians killed by Israeli forces is 131, including 15 children and a woman, since the weeks-long massive demonstrations began.

The total number of injuries and gas inhalation was 14,811, of which 6,836 were treated in the field at medical points and 7,775 were treated in hospitals. Among the injured were 2,525 children and 1,158 women, according to the statement.

The ministry said that two paramedic, including a female paramedic were killed, and 229 medics were injured with live ammunition and tear-gas suffocation, while 39 ambulances were partly damaged.

Meanwhile, the Forum of Palestinian Journalists in the Gaza Strip said that two journalists, Yasser Murtaja and Ahmad Abu Hussein, were killed during the protests.

The forum added that 175 journalists were injured since the beginning of the marches.
Arrests, injuries reported in West Bank sweep by Israel army

The list of arrestees included the alleged perpetrator of an anti-occupation car-ramming attack carried out on Road 60 near Husan town, west of Bethlehem.

At the same time, several Palestinians choked on teargas canisters during fierce clashes with the IOF in Tulkarem’s refugee camp of Nour Shams.

Israeli soldiers stormed the home of the two Palestinian prisoners Abdullah and Rami Fouda, before they kidnapped their brother Mohamed. The detainees’ father was rushed to a hospital as a result of the panic inflicted by the Israeli assault.

Two more youngsters were kidnapped by the IOF from their homes in the camp.

Meanwhile, Israeli soldiers arrested four Palestinian young men in their 20s of age from Bethlehem province after they wreaked havoc on their family homes.

22-year-old Mahdi Abeiyat was summoned to questioning at the Gush Etzion camp after Israeli officers ransacked his family home.

In the meantime, dozens of Palestinians, among them children, sustained breathing disorders in clashes with the occupation patrols in al-Khalil’s northern town of Beit Ummar, in the southern occupied West Bank.

Israeli soldiers further seized Palestinian cars after they came down heavily on the drivers.

The campaign culminated in the abduction of the Palestinian young man Nidham Khadraj from his family home in Qalqilya and another from Ramallah’s village of al-Mugheir.
23 june 2018
3 IOF soldiers injured by hit-and-run attack

Three soldiers of Israeli occupation forces (IOF) were injured on Saturday evening after being run over by a car allegedly driven by a Palestinian man on Street 60 near Neve Daniel settlement in Bethlehem.

The spokesman of the IOF said, in a brief statement, that IOF troops have been carrying out an operation of combing and investigation into the attack.

Israeli media sources stated that IOF soldiers raided Housan town near Bethlehem and fired light bombs in order to find the car driver who managed to flee the scene.

Three Israeli soldiers were injured Saturday night, after being hit by a Palestinian car near Husan town, west of Bethlehem in the occupied West Bank.

Although the Israeli military claimed that the soldiers were hit deliberately in what they called a “suspected car-ramming attack”, there was no evidence that the collision was anything beyond a car accident.

A cell phone video after the incident shows Palestinian civilians approaching the injured soldiers to try to help them.

A female soldier is seen in the video calling on her radio for an ambulance, and the Palestinian civilians nearby reiterate that an ambulance is needed, and a person can be heard crying after seeing the injured soldiers. video

The three soldiers suffered mild injuries, and were rushed by Israeli medics to the Shaare Zedek Medical Center, in occupied Jerusalem.

Israeli daily Haaretz said the military initiated a search campaign to arrest the driver, who fled the scene, leaving his vehicle behind.

The driver, from Deheishe refugee camp, in Bethlehem, contacted the Palestinian police in Bethlehem, and told them that what happened was merely an accident, and that he fled the scene because he feared the soldiers would kill him, similar to what happened in previous incidents when the military claimed that car accidents were deliberate attacks, and soldiers killed the drivers immediately on the scene.

In 2015, for instance, an elderly Palestinian woman, Tharwat Salman Sha’rawi, was shot and killed by Israeli soldiers after a car accident.

And in 2016, another Palestinian woman, Amani Sabateen, a mother of five, was shot and killed after her vehicle accidentally struck an Israeli soldier who was on the street in her town, injuring him.

Haaretz quoted a source in Deheishe refugee camp stating that the brother of the driver in Saturday’s incident was recently abducted by the soldiers. This led the paper to claim that the incident “could have been an act of revenge.” The Israeli army claimed it was investigating the incident.

It is worth mentioning that the soldiers were invading Husan when the incident took place and were deployed on foot in various streets.

Palestinian driver hits three IDF soldiers, lightly hurting them, and then flees into the nearby village of Husan in what the IDF suspects is a terror attack.

A Palestinian driver hit three IDF soldiers with his vehicle near the settlement of Beitar Illit on Saturday night and then fled into the nearby village of Husan, in what the IDF suspects was a terror attack.

The two female soldier and one male soldier, who were on a foot patrol in Husan, were lightly hurt. They received initial treatment on the scene and then evacuated to the Shaare Zedek Medical Center.

Security forces were called to the scene and are now searching for the driver.

The village of Husan is located near the ultra-Orthodox settlement of Beitar Illit. The IDF sets up roadblocks at the entrance to the village every now and again to stop stone-throwing.
Israeli Soldiers Abduct A Palestinian In Hebron

Israeli soldiers abducted, on Saturday at dawn, a young Palestinian man in Hebron city, in the southern part of the occupied West Bank.

Media sources in Hebron said the soldiers invaded and ransacked many homes, before abducting a young man, identified as Bara’ Jaber.

The soldiers also attacked Palestinian protesters, and fired many gas bombs and concussion grenades at them, in Khallet Hadour and Junaid Mountain areas in Hebron.

Fires broke out on Friday morning east of Nahal Oz military site allegedly after an incendiary balloon was flown from Gaza.

Hebrew-speaking sources said firefighting crews operated in the morning to put out the flames in Moshav agricultural lands, east of Nahal Oz.

Over recent days, fires broke out after incendiary balloons and kites have been fired from Gaza toward Israeli settlement communities east of the border fence.
20 june 2018
Grenade Hurled At Army Post In Hebron

Israeli sources said. Tuesday, that an explosion struck a post for the Israeli Military Police, in Hebron, in the southern part of the occupied West Bank.

The sources said the explosion was caused by an explosive charge which detonated near the police post, close the the Ibrahimi Mosque in Hebron.

The Israeli police and army initially claimed the explosion was caused by a grenade which was reportedly thrown at the post, but later said it was an explosion charge.
19 june 2018
Palestinians open fire at IOF military camp

Israeli media sources revealed that the fighters opened fire at a military camp of Israeli occupation forces (IOF) as they were driving a car quickly near Ofer military camp.

No casualties or injuries have been reported. However, IOF soldiers rushed to the scene and carried out a wide-scale combing operation.
18 june 2018
Israeli Soldiers Kill One Palestinian In Gaza

Medical sources in Gaza said the Palestinian was rushed to the Shifa Medical Center, in Gaza city, before he was admitted to surgery, after suffering severe wounds.

ٍٍSabri was a newlywed young man, who got married only five months ago.  He was shot near Karni Crossing, east of Gaza city.

Israeli sources said some protesters continued to launch burning kites across the border fence, causing a new fire near Kissufim military base, in southern Gaza.