A Palestinian woman was shot and injured Tuesday evening for allegedly carrying out a stabbing attack near the Israeli settlement of Ariel illegally built in Salfit to the north of occupied West Bank.

Israeli 0404 website claimed that Israeli forces opened fire at a Palestinian woman after she allegedly attempted to stab an Israeli soldier at a junction west of Ariel on Tuesday afternoon. No Israelis were injured in the incident, the sources added.

The woman was shot in her chest and limbs and left bleeding for long hours without receiving any medical treatment, eyewitnesses told the PIC reporter.

Israeli forces prevented a Palestinian ambulance from reaching the scene and providing medical assistance, but an Israeli ambulance was later seen taking the woman away.

Following the alleged attack, Israeli forces intensified their presence in the area and imposed a tight cordon around the nearby town of Hares, north of the city.
9 Palestinians kidnapped by IOF at crack of dawn

At least nine Palestinians were kidnapped and another was injured by the Israeli occupation forces (IOF) in an abduction sweep rocking the occupied West Bank at dawn on Tuesday.

The IOF kidnapped eight Palestinians, including three 16-year-old minors, from the occupied West Bank provinces of Nablus, Bethlehem, and al-Khalil, and dragged them to an unidentified destination.

Violent clashes burst out in al-Makhfiyeh neighborhood, in Nablus, where the IOF attacked the Palestinian protesters with heavy spates of stun grenades and rubber bullets.

A 21-year-old Palestinian youth sustained bullet wounds and was rushed to the Rafidia hospital by the Red Cross ambulance to be urgently treated for a hemorrhage infecting his right hand.

Local sources identified the captive as 30-year-old Abada Sherif Daraghmeh. IOF patrols were heavily stationed near the main entrances to Tubas city so as to protect the undercover units.
Israeli Army Injures A Child, Kidnap Two Persons In Bethlehem

The Bethlehem office of the Palestinian Prisoners Society (PPS) said the two kidnapped Palestinians have been identified as Fares Khader Zreina, 20, and Mohammad Khaled al-Kurdi, 19.

The soldiers also occupied many rooftops, fired gas bombs and concussion grenades at Palestinians who hurled stones and empty bottles at the military vehicles.

In addition, the army invaded Beit Fajjar town, south of Bethlehem, clashed with many youngsters, who hurled stones and empty bottles at the military vehicles, while the soldiers fired several live rounds, gas bombs, and rubber-coated steel bullets.

Medical sources in the town said a child, 16, was shot with a live round in his leg, while many other Palestinians suffered the effects of teargas inhalation.
4 july 2016
Clashes, arrests reported across West Bank

The Israeli Occupation Forces (IOF) launched Monday a large-scale raid and arrest campaign across the West Bank which led to the outbreak of violent clashes.

In Jenin, IOF soldiers arrested at dawn Monday a young man from his house and took him to a nearby detention center while clashes broke out in Qabatia town, south of the city, when Israeli forces violently stormed the town amid heavy firing of teargas bombs.

A military checkpoint was also erected in the area. In al-Khalil, Israeli forces stormed in large numbers Dura and Bani Naim towns.

Eyewitnesses affirmed that IOF soldiers in more than 25 military vehicles broke into Dura town which led to the outbreak of violent clashes with local residents. Several injuries were reported during the clashes as Israeli forces heavily fired rubber bullets and tear gas bombs.

A resident was arrested while a local home was stormed during the raid. Along the same line, Israeli forces surrounded a mosque and forced worshipers to evacuate it.

Similar provocative raids were reported in the neighboring villages which led to the outbreak of clashes with locals. Meanwhile, two brothers were arrested as IOF stormed Bani Naim town that was subjected to a tight security cordon over the past few days. 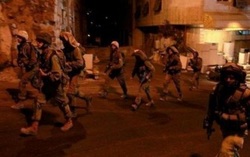 Israeli soldiers have kidnapped, on Monday at dawn, at least eight Palestinians in massive invasions of homes, in different parts of the southern West Bank district of Hebron, and injured one Palestinian in Doura town, south of Hebron city.

The soldiers also invaded the Shorafa area, in Doura town, and clashed with many Palestinians, who hurled stones at the invading vehicles, especially after the soldiers surrounded a mosque, and demanded many youngsters to step out.

One Palestinian was shot with a live round in his leg, while many worshipers suffered the effects of tear gas inhalation.

In addition, the soldiers invaded Bani Neim town, east of Hebron, searched several homes and kidnapped two Palestinians, identified as Tamer Abu Luay Tarayra, the brothers of Mohammad Tarayra, who was killed by the army on Thursday, June 30th, after he stabbed and killed a 13-year-old Israeli child in Keryat Arba’ colony, before he was shot dead.

Their sister, Lara Nasser Tarayra, 22, was kidnapped by the soldiers, Sunday.

Another Palestinian, identified as Ala’ Ghazi Qa’qour, 34, was kidnapped after the soldiers invaded his home, and searched it, in Tarqoumia town, west of Hebron.

It is worth mentioning that the towns of Bani Neim, Sammoa’, Doura and Yatta, in addition to the al-Fawwar refugee camp, remained under strict Israeli siege and massive home invasions, for the fourth consecutive day.

The soldiers closed all of their main roads with roadblocks, and in many other areas with concrete blocks, and confiscated various surveillance tapes and equipment.

On Sunday at night and on Monday at dawn, the soldiers kidnapped at least fifteen Palestinians in different parts of the occupied West Bank, including in occupied Jerusalem, during massive invasions and searches of homes.
Videos: Israeli Army Injures Four Palestinians, Demolishes Two Homes, In Qalandia
Assaf, who were killed on December 24, 2015, after carrying out a stabbing attack in Jerusalem.

The Palestinian Red Crescent said the soldiers shot four Palestinians with live fire, and that one of them suffered a serious gunshot wound in his back, during clashes that took place after the soldiers invaded the camp, and demolished the two homes.

It added that the soldiers prevented its ambulances from entering the refugee camp, and fired several gas bombs at the ambulances and medics, as they were trying to reach wounded Palestinians.

The Red Crescent also said it received phone calls about additional injuries in the al-Kassarat area of the refugee camp, but the soldiers are not allowing them through.

The Qalandia Media Center said the invasion was carried out by at least 1000 soldiers, after the army completely surrounded the camp, and that the army exchanged fire with armed resistance fighters.

The extended military invasion into the refugee camp was carried out after residents of the camp realized that undercover Israeli soldiers infiltrated into it, driving cars with Palestinian license plates, and hurled stones of the soldiers before dozens of army vehicles advanced into camp.

The army imposed a strict siege on the camp, and closed all of its main roads, preventing the Palestinians from entering or leaving it.

The soldiers also shot and destroyed street lights, while many soldiers occupied rooftops before using them to fire on the protesters.

In addition, the army deployed surveillance balloons to monitor the Palestinians during the invasion.

Local sources in the camp said the soldiers invaded it from various directions and headed towards the homes of Anan Abu Habsa and Issa Assaf, who were killed on December 24, 2015, after carrying out a stabbing attack in Jerusalem.

The army used megaphones ordering all residents living near the homes of the two slain Palestinians to leave, as the soldiers prepare to demolish the family homes of Assaf and Abu Habsa.

The invasion led to clashes in the refugee camp; the soldiers fired many rounds of live ammunition, gas bombs, concussion grenades and rubber-coated steel bullets.

Medical sources said one Palestinian was injured with a live Israeli army round, and that Red Crescent medics are trying to reach him, but the soldiers stopped their ambulance and prevented them from even walking to him.
3 july 2016
Army Injures Two Palestinians With Live Fire Near Hebron 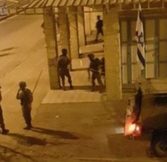 Israeli soldiers invaded, on Saturday evening, Doura town, south of the southern West Bank city of Hebron, and clashed with several local youths, before wounding two with live rounds, and many others with rubber-coated steel bullets, while many Palestinians suffered the effects of teargas inhalation.

On Saturday at night, several Palestinians were injured after a number of extremist Israeli settlers, living in illegal colonies in the northern West Bank district of Nablus, attacked Palestinian cars and hurled stones on them, in areas in the southern and western parts of Nablus.
2 july 2016
Gazan injured by Israeli gunfire attack on border area

A Palestinian young man from the Gaza Strip on Friday evening suffered a bullet injury when Israeli soldiers opened fire at civilians during their presence in an agricultural area east of the border fence.

Local paramedics told Anadolu news agency that a number of Palestinian civilians were in an agricultural area inside Gaza, particularly to the east of al-Bureij refugee camp when border soldiers opened fire at them with no reason.

They added that one young man was injured in the attack and rushed to Shuhadaa al-Aqsa hospital in Deir al-Balah in central Gaza.

Israeli gunfire attacks happen recurrently in Gaza border areas and endangers the lives of civilians and farmers. The Israeli army also carries out, every once in while, military incursions and bulldozes cultivated plots of land.
Israeli Air Force Carries Out A Series On Air Strikes In Gaza

The Israeli Air Force carried out, on Saturday at dawn, a series of air strikes targeting a number of sites, believed to be run by armed resistance groups, in different parts of the besieged Gaza Strip. The army said a shell was fired from Gaza, on Friday at night.

Media sources in Gaza have reported that the Israeli Air Force fired several missiles into two sites, run by the Al-Qassam Brigades, the armed wing of Hamas, south of Gaza city, and a blacksmith workshop in Gaza’s Zeitoun neighborhood.

Another strike targeted Qassam sites in Beit Lahia and Jabalia, in addition to a shed near the Agricultural School, east of Beit Hanoun, in the northern part of the Gaza Strip. The strikes caused excessive property damage.

Israeli media said that a shell was fired from Gaza, just after 11 before midnight, and landed in the Negev town of Sderot, causing damage to a kindergarten, adding that the “Red Alert” siren system was sounded, on Friday evening, in Sderot.

No one was hurt in the raids. Two Palestinian citizens were reportedly injured in another air raid on an industrial workshop belonging to the Hasanain family in al-Zeitun neighborhood, east of Gaza City.

Later, a warplane fired several missiles at an agricultural structure in Beit Hanoun, north of Gaza, and destroyed it.