A number of Palestinian citizens were left injured early Sunday morning after the Israeli occupation forces (IOF) rolled into al-Khalil’s northeastern town of Sa’ir and imposed a security cordon.

Reporting from Sa’ir, in the southern occupied West Bank, a PIC news correspondent said the IOF rolled into the area in 20 army jeeps late on Saturday night under the pretext of searching for gunmen who opened fire at a settler’s car near Tekou’a town, to the north of al-Khalil.

Violent clashes burst out with the Israeli occupation troops across Sa’ir town, culminating in a tough security cordon imposed around the territory. Israeli snipers also climbed over rooftops of Palestinian civilian homes, triggering panic among women and children.

The IOF reportedly prevented ambulances from evacuating the injured Palestinian protesters to hospitals. Dozens of Israeli soldiers raked through residential neighborhoods and rummaged into civilian homes before they seized surveillance cameras.

The IOF further declared Sa’ir and Tekou’a closed military zones under the pretext of searching for the shooters. The IOF reportedly tightened the noose around Palestinians’ necks on the main entrance to Ras al-Joura area, in al-Khalil, and sealed off the access roads to Etzion, Beit Fajjar, and al-Nabi Youssef.

Eyewitnesses said over 70 Israeli army jeeps stormed Sa’ir from all corners following the shooting. Dozens of Palestinian civilians choked on teargas canisters that were randomly discharged by the IOF all the way through the clashes.

The IOF closed the main passageway to Sa’ir, al-Shyoukh, and the Wadi al-Sahrq areas. Over 50,000 Palestinians living on Road 60 have been subjected to a tight military blockade in the process.

Earlier on Saturday afternoon, the IOF imposed a security cordon on al-Khalil’s towns of Yatta and al-Samou’, blocking Palestinians’ movement in and out.
Army Kidnaps Two Palestinians In Bethlehem

The Bethlehem Office of the Palestinian Prisoners’ Society (PPS) has reported that dozens of soldiers invaded, on Sunday at dawn, ‘Aida refugee camp and Ertas town, in the West Bank district of Bethlehem, kidnapped two Palestinians and summoned another for interrogation.

It added that the soldiers summoned one Palestinian, identified as Fadi Nazeeh Ismael for interrogation in the Etzion military base and security center, south of Bethlehem.

Local sources in Ertas said the soldiers also forced dozens of worshipers out of the village mosque, during dawn prayers, and interrogated many of them.

The invasion led to clashes between the soldiers and many local youths, who hurled stones and empty bottles, while the army fired several rubber-coated steel bullets and gas bombs.

Israeli soldiers invaded, late at night and on Sunday at dawn, Sa’ir town, north of the southern West Bank city of Hebron, injured at least four Palestinians and kidnapped three others.

The army said it invaded the town after an Israeli settler was injured by live fire while driving on a bypass road.

Media sources in Hebron said dozens of soldiers invaded Sa’ir town, after completely surrounding and isolating it, and clashed with dozens of local youths, who hurled stones and empty bottles at the invading vehicles.

The soldiers also stormed and violently searched many homes and stores, in addition to confiscating several surveillance tapes and equipment.
In Hebron city, the soldiers kidnapped Mahmoud Mohammad Motawe’, 20, after violently searching his home.

In addition, the army invaded the towns of Doura, Yatta, Sammoa’ and Tarqoumia, searched many homes and kidnapped Shadi Mohammad ‘Oleyyan, from Sammoa’, and Shadi al-Masri, from Tarqoumia.

The soldiers also summoned many Palestinians for interrogation, especially in Sammoa’, Yatta and Doura.

One Palestinian, identified as Bassam Mahmoud Tbeish, was shot with an Israeli army round in the Ramadeen area, south of Hebron, before medics moved him to a hospital in Hebron city.
IOF closes main roads in al-Khalil

Israeli Occupation Forces (IOF) at noon on Saturday closed main and bypass roads in Doura and Yatta towns in al-Khalil.

The coordinator of the national committee against settlement in Yatta, Ratib al-Jabour, told Quds Press that Israeli forces closed, by stones and sand berms, all of the entrances to the town.

Israeli soldiers fired gas and stun grenades at Palestinians at one of the checkpoints leading to suffocation among some of them.

The IOF also closed the main gate leading to Doura town from the side of al-Fuwar refugee camp and blocked the main entrance to the camp as well by sand berms.
9 july 2016
IOF targets Palestinian farmers in southern Gaza

The Israeli heavy shooting forced Gazan farmers to leave their farms with no casualties reported.

The attack is another episode in the series of Israeli semi-daily violations of the Cairo-brokered truce accord signed between Israel and Palestinian resistance on August 26, 2014 in the wake of the Israeli offensive on the besieged coastal enclave, which killed over 2,300 Palestinians, mostly civilians.
Army Injures Several Palestinians, Kidnaps One, Near Hebron

Israeli soldiers invaded, on Saturday at dawn, the town of Doura, south of the southern West Bank city of Hebron, and clashed with many local youths, wounding several Palestinians, and kidnapped one Palestinian after initially detaining him along with two others.

Local sources in Doura said the clashes were focused in the center of the town, and that the soldiers fired many rounds of live ammunition, rubber-coated steel bullets and gas bombs.

One Palestinian was shot with a live round in his leg and was moved to a hospital for treatment, suffering a moderate injury.

Medics also provided the needed treatment to several Palestinians, who suffered the effects of teargas inhalation.

In addition, the soldiers confiscated a car, belonging to detainee Soheib Jabara al-Faqeeh, and kidnapped three Palestinians, but released two of them later.

The soldiers detained Mo’ab and Nabil Sharawna, the brothers of Mo’taz Idrees Sharawna, 19, who was killed by Israeli soldiers, on July 2, 2013, after the soldiers invaded Doura.

The two siblings were released later, while the soldiers also kidnapped Adam Taha Abu Sharar, 30, and took him to an unknown destination.
Army Injures A Solidarity Activist, Detains 2 Photojournalists And One Medic, In Kufur Qaddoum
The Palestinians and international solidarity activists managed to march from the center of the village, before a soldier, who was hiding in one of the homes, fired live rounds, wounding a solidarity activist with a bullet in his right thigh.

The activist, who requested to remain anonymous, was moved to the Rafidia governmental hospital, in Nablus.

The soldiers also detained two Palestinian photojournalists, identified as Mahmoud Fawzi and Kamel al-Qaddoumi, and a Red Crescent medic, identified as Sami Jom’a. The three were held for three hours before the soldiers released them.

Clashes also took place in the town after the soldiers invaded it and fired on the protesters, causing many to suffer the effects of tear gas inhalation.

A Jordanian youth sustained wounds on early Friday morning after he was shot by an Israeli security officer near the Palestine-Jordan borders.

Israeli news sources claimed that the youngster was shot by an Israeli guard near the Jordan Valley as he tried to creep from Jordan.

The casualty was rushed to the Poriya hospital so as to be urgently treated for the wounds sustained in the attack.

The Israeli Yedioth Aharonot newspaper identified the youth as a 26-year-old Jordanian citizen. No further details were cleared for publication as regards his identity.
Army Kidnaps A Palestinian In Husan, Searches Homes Near Al-Khader

Israeli soldiers kidnapped, on Friday at dawn, a young Palestinian man in Husan town, west of Bethlehem. The soldiers also invaded al-Khader town, south of Bethlehem and searched many homes.

The soldiers also confiscated mobile phones and computers from the invaded property.

In related news, the soldiers invaded Solomon Pools area, near the al-Khader town, and searched many Palestinian homes.

Owners of two of the invaded homes have been identified as Mohammad Daoud Suleiman and Ali Mohammad Salem.

The invasion led to clashes with local youngsters, who hurled stones at the invading military vehicles, especially in the al-Bawwaba area and the Jerusalem-Hebron road. The army fired many gas bombs and concussion grenades.
7 july 2016
6 Palestinians arrested during overnight clashes

According to the PIC reporter, the clashes erupted after midnight and lasted till dawn prayer after Israeli forces violently stormed Dura town in al-Khalil.

Nearly ten Israeli military vehicles stormed the city and deployed in different neighbourhoods. At least one detainee was rounded up after Israeli forces stormed and searched his family home which led to the outbreak of violent clashes.

During the confrontation, local youths set fire to tires to block the passage of Israeli forces. Israeli forces also stormed Khursa village in the city and arrested three residents including two teachers from their houses.

35 Palestinians sustained injuries on early Wednesday morning after they were violently attacked by the Israeli occupation forces (IOF) during an assault on al-Khalil’s southern town of Dura on the first day of Eid.

The IOF also kidnapped four Palestinians from al-Bireh, to the north of Occupied Jerusalem. The assault culminated in the abduction of a Palestinian citizen from Dura and three others from Deir Abu Meshaal village.
Army Injures Eight Palestinians With Live Fire, Others With Rubber-Coated Steel Bullets, Near Hebron

Israeli soldiers invaded, on Wednesday at dawn, several neighborhoods in Doura town, south of the southern West Bank city of Hebron, injured eight Palestinians with live fire, and many others with rubber-coated steel bullets. The soldiers also invaded a few communities near the town.

Media sources said the soldiers invaded several neighborhoods in Doura, and clashed with youngsters, who hurled stones and empty bottles on the military vehicles, while the soldiers fired rounds of live ammunition, rubber-coated steel bullets, gas bombs and concussion grenades.

The soldiers also fired on Palestinians shopping in a local market.

Sources in the Urgent Care Unit of Alia governmental hospital, in Hebron, said six Palestinians were shot with live rounds, and that one of them was moved to surgery, after he was also treated for the severe effects of tear gas inhalation. Dr. Wisam Abu Sneina described the injuries of the wounded Palestinians as mild-to-moderate.

The sources added that Red Crescent medics provided the needed aid to many Palestinians, who suffered the effects of tear gas inhalation, and several others who were shot with rubber-coated metal bullets.

In related news, the soldiers invaded Kharsa nearby village, and the areas of Shorafa, Kanar and Wad Ghneim, before breaking into many homes and searching them.
Army Invades Huwwara, Imposes Curfew 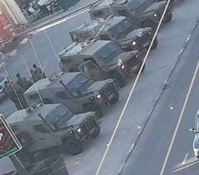 The soldiers also invaded and searched several homes and shops, and were extensively deployed on the town’s main road, before declaring curfew.
Israeli Soldiers Open Fire On Palestinian Homes in Khan Younis 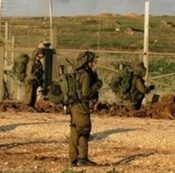 Israeli soldiers, stationed across the border fence, fired several rounds of live ammunition at Palestinian homes in the al-Qarara area, northeast of Khan Younis, in the southern part of the Gaza Strip.

Eyewitnesses said the soldiers, stationed on towers in a military base across the border fence, east of the town, fired many live rounds at the homes, causing damage.