Violent clashes between Palestinian citizens and Israeli Occupation Forces (IOF) erupted on Friday following a peaceful march that kicked off south of al-Khalil city in the southern West Bank.

The march aimed at protesting the construction of an Israeli military watchtower at the junction of Kharsa town, south of al-Khalil city.

Local sources revealed that scores of Palestinians performed Friday prayer at the area of the watchtower which has been under construction for a few days.

IOF soldiers showered protesters with stun grenades and tear gas canisters in addition to rubber-coated bullets. A number of the marchers fainted, while others sustained breathing problems in the process, the sources added.

In a similar context, two Palestinian youths were injured in the Israeli quelling of Kafr Qaddum weekly peaceful march.

The Anti-Separation Wall and anti-settlement march also demanded the reopening of a main road closed by the IOF 14 years ago.
Injuries as IOF brutally disbands anti-occupation rally in al-Khalil

Dozens of Palestinians sustained injuries Friday after the Israeli occupation forces (IOF) violently attacked a rally staged in response to the establishment of a military watchtower at Kharsa crossroads, in al-Khalil.

Heavily-armed Israeli patrols showed up shortly afterwards and declared the area a closed military zone before the soldiers sprayed protesters with sewage in an attempt to disband them. The Israeli forces further cracked down on journalists and cameramen.
Renewed clashes in Jaffa after police arrest brother of slain teen

Violent clashes broke out on Thursday evening in Jaffa city between Palestinian young men and Israeli police after the latter arrested the brother of a 22-year-old fellow citizen, who had been killed in cold blood a few days ago.

Eyewitnesses said that young men clashed with police officers in Yefet street, throwing stones and torching tires and dumpsters in protest of the arrest of the brother of Mahdi Saadi, who was shot dead by the police last Saturday.

They added that the police responded by intensively firing tear gas and stun grenades at the protesters to disperse them, and sealed off the area of clashes.

The renewed skirmishes were the latest violent events in the city, which has seen bouts of unrest since the shooting incident.

In the early hours of last Saturday, Israeli policemen opened fire at two Palestinian young men and killed one of them, claiming they were involved in a shooting on a street in Jaffa and attempted to flee the scene on mopeds.
Army Injures One Palestinian In Bethlehem 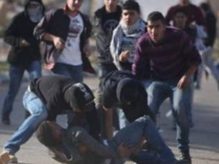 Israeli soldiers invaded, on Friday at dawn, Beit Fajjar town, south of Bethlehem, and clashed with many local youths, before shooting a young man.

Media sources in Beit Fajjar said the soldiers invaded the town from several directions, and clashed with local youngsters, who hurled stoned and empty bottles on the military jeeps.

The soldiers fired many live rounds, gas bombs and concussion grenades, wounding a young man with a rubber-coated steel bullet in the chest.

Medics rushed to the town, and moved the wounded young man to a hospital in Bethlehem, after suffering moderate injuries.
Israeli Soldiers Injure One Palestinian, Abduct Another, In Qalandia

Israeli soldiers invaded, on Friday at dawn, Qalandia refugee camp, north of occupied Jerusalem, searched homes and clashed with local youngsters, before shooting one and abducting another.

Local sources said the soldiers abducted a young man, identified as Abed Ayed Sho’ani, and took him to an unknown destination.

Medical sources in Ramallah said the soldiers also shot and injured one Palestinian, with a Toto expanding bullet in his leg.

The added that the young man suffered a moderate injury, and was moved to Palestinian Medical Complex in Ramallah.

It is worth mentioning that the soldiers fired many live rounds, rubber-coated steel bullets and gas bombs, during the invasion.

According to local sources, five Israeli military bulldozers, moved some 50 meters into eastern Khuza’a town, to the east of Khan Younis city.

The Israeli vehicles leveled Palestinian land lots near the border fence. At the same time, a flock of Israeli army vehicles have been deployed on the borderland.
2 aug 2017
Army Abducts Two Palestinians In Rafah, One In Ramallah 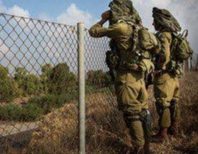 Eyewitnesses said the soldiers fired many live rounds into the agricultural lands, close to the border fence, east of Rafah, and abducted two Palestinians for “approaching the fence.”

The two were cuffed and blindfolded before the soldiers moved them to an unknown destination.

Israel prevents the Palestinians from entering their owned lands, in all areas close to the border fence, in the northern and eastern parts of the Gaza Strip, in addition to frequently invading and bulldozing the lands.

In the West Bank, the soldiers invaded the al-Masayef area, in Ramallah, and abducted Yazeed Rajeh Rimawi, 38, from his home after violently searching it.

Israeli soldiers invaded, on Wednesday at dawn, Bethlehem city and nearby communities, searched many homes and abducted three Palestinians, including a teenager.

It is worth mentioning that the soldiers clashed with many young Palestinians, after the army invaded the al-Khleifat area, in Bethlehem city, and fired gas bombs, concussion grenades and rubber-coated steel bullets.
Army Injures And Abducts A Palestinian In Al-Khader, South Of Bethlehem

Several Israeli military vehicles invaded, on Tuesday at night, the town of al-Khader, south of the West Bank city of Bethlehem, and clashed with many local youngsters, before shooting a Palestinian, who was driving his motorcycle, and abducted him.

Ahmad Salah, a local activist in al-Khader, said the soldiers clashed with many youngsters, who hurled stones at the invading military jeeps, while the army fired gas bombs, rubber-coated steel bullets and concussion grenades.

He added that the wounded Palestinian, identified as Dia’ Khader Salah, 24, who happened to be driving his motorcycle when the soldiers invaded the town, was shot with a gas bomb in his back, and fell onto the ground, before the soldiers abducted him.

The incident took place close to the Nashash military roadblock, at the southern entrance of al-Khader.

The soldiers also invaded al-Khader’s Old City, and fired gas bombs and concussion grenades at local protesters, causing fire to a tree close to a home owned by Omar Issa.

Local rushed to the property, and extinguished the fire before it spread to the house or other surrounding trees.
31 july 2017
Israeli navy targets Gaza fishing boats with machinegun fire

No injuries were reported in the shooting attack.

The attack represents a flagrant violation of the Cairo-brokered ceasefire accord struck in the wake of the 2014 offensive on the besieged coastal enclave of Gaza.
Israeli police assault, arrest old man & his son at Hetta gate

Israeli police on Monday arrested a Jerusalemite old man, Abu Feras Jarjour, along with his son at Hetta gate of al-Aqsa Mosque in Occupied Jerusalem. Israeli policemen brutally assaulted the father and his son before rounding them up.

The police attack outraged the Palestinians who witnessed the incident, resulting in altercations which were about to turn into clashes.

Violent clashes broke out between Palestinian youths and Israeli police in occupied Jerusalem on Sunday evening.

Meanwhile, an ex-prisoner was detained from Silwan town, south of al-Aqsa Mosque, only a week after his release from Israeli prison where he served a one-year sentence.
Two injured by explosion of suspicious object in south Gaza

Two Palestinians, including a 13-year-old child, suffered different injuries Sunday evening by the explosion of a suspicious object from the Israeli forces’ remnants east of Khan Younis to the south of Gaza Strip.

According to the PIC reporter, the two were moderately injured and they were both taken to hospital for treatment.

Many Palestinians, especially children, have been injured and killed in different areas of occupied Palestine by unexploded ordnance of Israeli army.
30 july 2017
Clashes follow funeral of Palestinian killed by Israeli Police in Jaffa

Eight Palestinians with Israeli citizenship were arrested in Jaffa early Sunday morning as stone throwers clashed with Israeli police following the funeral of a young man shot and killed by the police Saturday morning.

Although Israeli officials tried to restrict the family of the slain Palestinian to holding a small funeral with only a few people present, hundreds of mourners ended up filling the streets, many of them angry about the police killing.

They began to march from the site of the young man’s burial, but were met by throngs of armed Israeli police, who began firing tear gas to break up the funeral procession.

Some young Palestinian men and boys responded to the Israeli attack on the crowd by throwing stones, and the Israeli police began chasing them down and grabbing young men randomly on the street, arresting eight.

The Police released his body after holding it for several hours, during which it negotiated with the family of the slain Palestinian, in an attempt to hold a funeral with a limited number of participants.

The Police closed many roads in Jaffa, and boosted its deployment, while dozens marched in the funeral procession chanting against the police.
Updated From:

Police claim that the two tried to shoot at police from a motorcycle, but their families denied those claims. No police were injured.

Following the police killing, the Israeli police held the body of al-Saadi in custody, preventing the family from holding the funeral (Islamic custom requires a funeral to be held as quickly as possible after a death).

Hundreds of people gathered at the family home of al-Saadi, then marched to the Abu Kabir Detention Facility, where his body is being held.
Police say they are negotiating with the family for the release of the body.

At the same time, dozens of heavily-armored Israeli police lined up outside the detention facility where the protesters were gathered. Clashes broke out between Israeli police and Palestinian protesters, in which the Israeli police fired tear gas and concussion grenades at the crowd.

Four were arrested during the protest, including a leader with the Islamic Organization in Jaffa, Abdel-Qader Abu Shehada. Police took the four to the Yftah detention center, where they were subjected to interrogation, according to local sources.

The police arrested four young men, including a member of the Islamic Organization in Jaffa, Abdul Qader Abu Shehada, during the protests against the killing of Saadi, and took them to the police station ‘Yftah’ in the city, where Abu Shehada was arrested from the center of ‘Yvit’, following the clashes that erupted between Police and youths angry at Saadi’s death.

Al-Saadi is the third Palestinian to be killed by Israeli forces in the past 24 hours. On Friday, a 24 year old man was killed at a military base south of Bethlehem, and a 16-year old boy was killed at a protest in Gaza.
Army Injures Two Palestinians, Abducts Two Others, In Jenin

Israeli soldiers invaded, on Sunday at dawn, Jenin refugee camp, in the northern West Bank city Jenin, before storming and searching homes, and abducted two Palestinians. The invasion led to clashes, resulting in the injury of two Palestinians.

Media sources in Jenin said dozens of soldiers invaded the refugee camp, before abducting Dia’ Mohammad Salama, 18, and Abdullah Qassem Sa’adi, 19, from their homes in the refugee camp.

It is worth mentioning that Dia’ is the brother of Aws Salama, who was killed by Israeli army fire on July 12, 2017.

The Red Crescent said its ambulance crews provided three children aged between 7 and 13 with medical assistance after they suffered rubber bullet injuries, adding that 19 other citizens also suffered from inhaling tear gas.

It also said that the soldiers deliberately fired rubber bullets and tear gas at its paramedics.

No arrests have been reported during the Israeli military force’s presence in the town.

In a separate incident, Israeli policemen on the same day arrested a Jerusalemite young man called Rami al-Fakhouri in the Old City. The reason for his detention is still unknown.