Violent clashes broke out in Doheisheh refugee camp, south of Bethlehem, when Israeli Occupation Forces (IOF) stormed the area at dawn Thursday and carried out a raid campaign.

According to the PIC reporter, IOF stormed a local printing shop and confiscated all its equipment for unknown reasons.

A Palestinian-owned car was also confiscated during the raid which led to the outbreak of violent clashes amid heavy firing of teargas bombs and rubber bullets.

During the confrontations, dozens of youths suffered breathing problems while a youngster suffered a rubber bullet injury.
PPS: “Israeli Soldiers Abduct Eleven Palestinians, Including Two Children, In The West Bank” 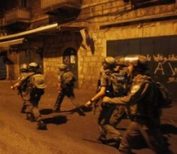 The Palestinian Prisoners Society (PPS) has reported that Israeli soldiers abducted, overnight and until dawn hours Thursday, eleven Palestinians, including two children, during invasions and violent searches of homes and property, in different parts of the occupied West Bank.

The PPS in Ramallah, in central West Bank, said the soldiers abducted Ahmad Odah al-Qadi, 50, and his son, Mustafa, from their home in Mazare’ Nobani town, after interrogating them and searching the property.

In Bethlehem, the soldiers also invaded a print shop in Bethlehem, in addition to abducting Mohammad Ibrahim al-‘Amour, 23, from his home in Teqoua’ town, east of the city.

Also in Bethlehem, the soldiers invaded homes in ‘Aida refugee camp, and abducted a child, identified as Ali al-Jawareesh, 13.

Furthermore, the soldiers invaded and searched homes in Shweika area, in the northern West Bank district of Tulkarem, and abducted Abdul-Salaam Mustafa Badawi, 40.

Another Palestinian, identified as Ahmad Fayez Sa’adi, was abducted in the Jenin refugee camp, in the northern West Bank district of Jenin, after the soldiers invaded and searched several homes.

In related news, the Israeli air force fired several missiles targeting a siege-busting commercial tunnel close to the Egyptian border, in Rafah, in the southern part of the Gaza Strip, killing two Palestinian workers, and wounding at least five others.
Over 200 Israeli soldiers storm Yabad, rummage into Palestinian homes

The Israeli occupation forces at daybreak Thursday rolled into Yabad town, in the northern West Bank province of Jenin, and wreaked havoc on Palestinian family homes.

Reporting from Jenin, a PIC news correspondent said over 200 Israeli soldiers, escorted by intelligence officers, rolled into Jenin’s southern town of Yabad and cordoned off residential alleys before they carried out mass break-ins into Palestinian homes.

The mass break-ins resulted in material damage at the same time as the Palestinian locals had been subjected to intensive questioning.

The Israeli soldiers handed over threats of collective punishment against the Palestinians in response to anti-occupation protests in the area.

At the early morning hours, the occupation army claimed it had spotted ammunition and hunting rifles during abrupt assaults on Palestinian homes in Yabad.
Israeli Navy Attacks Fishing Boats In Gaza, Army Attacks Homes And Lands

They added that the soldiers also fired many flares over the area, but did not conduct a military invasion.

In addition, Israeli navy ships opened fire on several Palestinian fishing boats, close to the shore, also in the northern part of the Gaza Strip, forcing the fishers back.
8 feb 2017
IOF incursion in Beit Hanoun, shooting in Rafah

Israeli bulldozers on Wednesday advanced a limited distance into the northern area of Beit Hanoun in northern Gaza Strip.

Meanwhile, Israeli forces in Sofa military site near the southern areas of the Gaza Strip opened fire towards agricultural lands, north of Rafah, with no injuries inflicted, local sources said.

Israeli forces target Palestinian farmers and shepherds near Gaza borders on a daily basis in violation of the calm agreement signed in Egypt in 2014.
12 Palestinians arrested in Israeli pre-dawn raids

The Israeli Occupation Forces (IOF) arrested overnight and at dawn Wednesday 12 Palestinians after carrying out large-scale raid and search campaigns.

IOF claimed that nine “wanted Palestinians” were arrested for allegedly being involved in anti-occupation activities.

A Palestinian young man was rounded up in Tulkarem, while four others were arrested in Bethlehem, according to the Israeli sources.

Four other arrests were carried out in al-Khalil.

Weapons were allegedly found during the raids, the IOF claimed.

Meanwhile, local sources affirmed that Israeli forces stormed last night Sebastia town, north of Nablus, and removed the Palestinian flag raised on an archaeological site in the area which led to the outbreak of violent clashes.

Two youths were arrested during the clashes and taken to unknown detention centers, the sources pointed out.

Breathing problems due to teargas inhalation were reported among the residents.

In Bethlehem, Israeli forces stormed Aida refugee camp and broke into a local rights group center before briefly detaining its members and confiscating its equipment.

Salah Ajarma, head of the center, was then arrested and taken to Rachel military center.

A number of local youngsters were also summoned for investigation for unknown reasons.

Along the same line, Israeli occupation soldiers stormed Jenin and carried out military drills while an Israeli helicopter was seen hovering over the area.

According to the PIC reporter, a young man, from Qabatia town, south of Jenin city, was arrested at a military checkpoint near Bethlehem.
Israeli Navy Attacks Palestinian Fishing Boats In Southern Gaza

Israeli navy ships opened fire, on Tuesday evening, at several Palestinian fishing boats, close to the shore in Rafah and Khan Younis, in the southern part of the besieged Gaza Strip.

Eyewitnesses said the navy fired dozens of live rounds at the boats, causing damage, and preventing the fishers from sailing.

On Tuesday morning, the navy fired several live rounds at Palestinian fishing boats, in Gaza territorial waters, close to the shore in the northern part of the coastal region.
7 feb 2017
2 Palestinian youngsters kidnapped by Israeli army from Sebastiya

The Israeli occupation forces (IOF) on Tuesday evening kidnapped two Palestinians from Nablus’s northern town of Sebastiya after they rolled into the area and lowered the Palestinian flag.

The arrestees were identified as Liwaa Kayed and Moayed Kiwan.

The occupation troops reportedly lowered the Palestinian flag on a mast set up in the archaeological area.
Israeli Navy Opens Fire At Palestinian Fishing Boats In Gaza

Eyewitnesses said the navy fired many rounds at the boats, close to the shore near Beit Lahia, causing property damage, and forcing the fishers back in fear of additional escalation.

The attack was part of a serious of ongoing Israeli violations against the Palestinians, in the besieged Gaza Strip.

The Israeli occupation forces (IOF) at daybreak Tuesday kidnapped 20 Palestinians, including a Hamas leader, from the West Bank and Occupied Jerusalem.

The Israeli occupation army claimed responsibility for the abduction of 18 Palestinians at predawn time on allegations of their affiliations with Hamas and involvement in anti-occupation activities.

The campaign targeted Palestinians from Jenin and Ramallah provinces.

The IOF further kidnapped five Palestinians from al-Ram town, in northern Occupied Jerusalem, two from Bethlehem’s western town of Hussan, and two others from al-Arroub refugee camp and Sai’r town in al-Khalil province.

Two Palestinian youths were reportedly arrested by the Israeli forces in Hizma town.

A PIC news correspondent said dozens of Israeli soldiers broke into the home of the Hamas leader Nazih Abu Oun in Jenin’s southern town of Jaba’ and wreaked havoc on the building before they kidnapped the activist.

A couple of weeks ago, the IOF detained Abu Oun for one day following an abduction sweep targeting Hamas affiliates.

Abu Oun was released just a few months ago from Israeli jails, where he had been locked up for a total of 18 years.

At the same time, the occupation troops rolled into Qabatiya town, in southern Jenin, and kidnapped three Palestinian youths after they rummaged into their family homes and seized their personal belongings.

The assault culminated in the abduction of the Palestinian civilian Ahmad al-Hweiti and his wife from Tulkarem camp, in the northern occupied West Bank.

Clashes flared up in the camp, where the IOF attacked the Palestinian protesters with randomly-shot spates of teargas canisters, resulting in several suffocation cases.