A group of Jewish settlers Friday evening stormed a historic site in Sabastia town near Nablus and provoked the Palestinian inhabitants who retaliated to their provocation by throwing stones at them.

Eyewitnesses told the PIC reporter that settlers’ incursion into the town was made under protection of Israeli soldiers who showered inhabitants with tear gas and stun grenades.

Sabastia’s historic area is repeatedly exposed to systematic incursions by Jewish settlers along with Israeli forces especially in Jewish holidays. The incursion of the settlers is usually launched amid heavy Israeli military reinforcements in order to secure the settlers’ tour in the town.
Four Palestinians injured by IOF in Bethlehem clashes

Four Palestinians sustained wounds on Saturday evening in clashes with the Israeli occupation forces (IOF) in Bethlehem’s eastern town of Tekou’, in the southern West Bank.

Israeli soldiers invaded, Friday, the town of Kufur Qaddoum, in the northern West Bank district of Qalqilia, and attacked the weekly protest against the Annexation Wall and colonies, leading to clashes.

He added that the soldiers fired rubber-coated bullets and gas bombs, while local youngsters hurled stones and bottles filled with paint on the invading military vehicles.

There have been no reports of injuries or arrests, and the soldiers left the town, after chasing many protesters and failing to abduct them.

The soldiers used their armored bulldozer to remove tires that some youngsters burnt in the street, to obstruct the military invasion.

Eshteiwy stated that the procession started peacefully, before the soldiers invaded the town, and that the protesters, accompanied by Israeli and international peace activists, marched while chanting for ending the illegal Israeli occupation of Palestinian, and ongoing popular resistance.
IOF quells demonstration at the Ibrahimi Mosque in al-Khalil

Israeli Occupation Forces (IOF) quelled a Palestinian demonstration which kicked off after Friday prayer at the Ibrahimi Mosque in al-Khalil city. The march aimed at protesting Israeli violations in the area especially turning it into Israeli security cantons.

The PIC reporter revealed that the demonstration was organized by national committees along with human rights activists in the city within a campaign launched a few days ago calling for the destruction of those cantons.

The IOF troops hindered the arrival of marchers into the Mosque before prayer time then assaulted participants in the march, he pointed out.
IOF quells weekly march in Ni’lin town

The participants chanted anti-occupation slogans and carried banners calling for ending the Israeli occupation, halting settlement expansion, and dismantling the Separation Wall as they were marching toward it.

Local sources reported that the IOF soldiers showered the participants in the march with tear gas and stun grenades resulting in suffocation cases among dozens of Palestinians as well as three Israeli solidarity activists.
Israeli Soldiers Invade Hizma In Jerusalem

Media sources said several armored military vehicles surrounded the town, before invading it, and started stopping and searching cars, while investigating the ID cards of the passengers.

The soldiers later started driving in various neighborhoods in the town, in addition to roaming in them on foot, and fired gas bombs, especially in the Eastern Neighborhood, causing many Palestinians to suffer the severe effects of teargas inhalation.
16 feb 2017
Israeli Soldiers Abduct Ten Palestinians In The West Bank 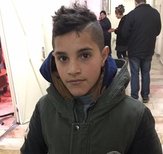 In addition, the soldiers abducted three Palestinians from their homes in ‘Azzoun town, in the northern West Bank district of Qalqilia.

The Tulkarem office of the PPS said the soldiers invaded Shweika area, north of the city, searched homes, and abducted Morad Monir Mahdawi, 26.

The Israeli occupation bulldozers on Wednesday morning knocked down three Palestinian homes in Hizma town, to the northeast of Occupied Jerusalem.

At the same time, Israeli cops stormed a Palestinian school in Silwan town, to the southeast of Occupied Jerusalem, in the hunt for alleged anti-occupation stone throwers.

A series of checkpoints was also pitched by the Israeli forces across Silwan, where Palestinian civilians have been subjected to intensive questionings and crackdowns.
IOF rolls into Beit Furik, subjects Palestinians to questioning

Activist Ali Hanani said the IOF stormed Nablus’s eastern town of Beit Furik and ravaged the home of the Palestinian citizen Meizar Abu al-Saoud, before they turned it into an interrogation site.

Ex-prisoner Samer Meiltat and Mohamed Nasasra, along with other civilians, had been detained for hours and subjected to exhaustive questioning by the IOF in the assault.

The break-in, the second of its kind over the past few weeks, makes part of an Israeli policy of collective punishment against the Palestinians of Beit Furik town.
13 feb 2017
Israeli shell on Gaza hits Palestinian resistance fighter

A Palestinian resistance fighter was hit and injured late on Sunday evening with the shrapnel of an Israeli artillery shell dropped on the blockaded Gaza Strip.

The National Resistance Brigades—the armed branch of the Democratic Front for the Liberation of Palestine (DFLP)—said in a statement that one of its fighters sustained wounds after he was directly hit with an artillery shell unleashed by the Israeli occupation army deployed on the eastern borders of Gaza’s Central Province.

DFLP armed wing reiterated its commitment to armed resistance as the only path to restore Palestinians’ infringed rights, oust the Israeli occupation, and establish an independent Palestinian state having Jerusalem as its eternal capital.
20 Palestinians kidnapped by Israeli forces from West Bank, Jerusalem

At least 20 Palestinians were kidnapped by the Israeli occupation forces (IOF) from the West Bank and Jerusalem at predawn time Monday.

The Israeli occupation army claimed responsibility for the abduction of 18 Palestinians from the West Bank.

The campaign targeted nine Palestinians from Bethlehem, five from Qalqilya, and four others from al-Khalil.

Meanwhile, violent clashes flared up in the northern West Ban province of Qalqilya after the IOF rolled into the area and attacked the Palestinian protesters with heavy spates of teargas canisters.

The IOF further broke into Palestinian homes and cracked down on civilian residents.

At the same time, Palestinian protesters hurled stones at settlers’ cars driving on an access road near Azzoun town, to the east of Qalqilya, shortly after the IOF stormed the area and sealed it off with military checkpoints.

Overnight, two Palestinians were kidnapped by the Israeli forces from Jerusalem’s Old City on claims that they attempted to attack Israeli cops.

The two youngsters had been subjected to aggressive beating in Al-Wad Street, in the Old City, before they were dragged to the Israeli Qishleh detention center, in western Occupied Jerusalem.

Israeli forces continue targeting Palestinian fishermen and farmers along with their agricultural lands in different locations in the besieged Gaza Strip on a semi-daily basis.

The gunfire attack is the latest in a series of breaches of the ceasefire agreement signed in Cairo in 2014 between the Palestinian resistance and Israel.
10 feb 2017
Gaza fishermen attacked by Israeli gunboats

According to eye-witnesses, the Israeli gunboats unleashed barrages of gunfire toward Palestinian fishermen sailing off Beit Lahiya seashore, to the north of Gaza’s coast.

No injuries were reported in the attack. However, Palestinian fishermen went ashore for fear of being killed in the shooting.