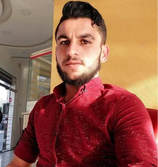 Two Palestinians were killed and dozens of others were injured by Israeli occupation forces’ (IOF) gunfire and tear gas grenades during their participation in a protest along the eastern Gaza border on Friday.

The Palestinian health Ministry announced the martyrdom of the 24-year-old Mohammad al-Hamayda, who died of his wounds after being shot by IOF soldiers in his abdomen and leg east of Rafah, and a 13-year-old boy, Yasser Abu al-Naja, who was shot in the head.

The Ministry also announced that 415 various injuries were reported due to Israeli quelling of protesters, and revealed that IOF soldiers targeted ambulance cars east of Gaza resulting in the injury of 3 paramedics.

The PIC correspondent said that thousands of Palestinians have been flocking to al-Awda camps along the eastern border of Gaza since noon time to participate in the 14th Friday of the Great Return March protests.
13-year-old Palestinian killed, more than 300 injured during 14th 'Great March of Return' protest

A 13-year-old Palestinian boy was killed on Friday after being shot by Israeli forces during the "Great March of Return" in eastern Khan Younis in the southern Gaza Strip.

The Gaza Ministry of Health confirmed that the 13-year-old boy succumbed on Friday evening to wounds he sustained in the head earlier during protests, pointing out that he was not yet identified.

More than three hundred other Palestinians were injured or suffered tear-gas inhalation as Israeli forces targeted protesters at the eastern borders of the Gaza Strip on the 14th Friday of the "Great March of Return."

Spokesperson of the Ministry, Ashraf al-Qidra, said that 310 Palestinians were injured were injured or suffered tear-gas inhalation. video

Al-Qidra added that three of the injures were reported to be critical.

Protesters gathered in "return camps" at the eastern borders of the Gaza Strip and set fire to tires. However, witnesses said that Israeli forces opened live ammunition at protesters in the Khuzaa town in eastern Khan Younis in the southern Gaza Strip.

A Ma'an reporter said that several youths were able to pull away parts of the Israeli security fence in eastern Khan Younis.

The "Great March of Return" protests were launched by thousands of Palestinian civilians in Gaza -- which has suffered from a decade-long Israeli siege -- who took to the borders to demand their right of return as refugees to their orignial homelands, now in present-day Israel.
28 june 2018
Palestinian killed by Israeli shell south of blockaded Gaza

A Palestinian boy succumbed to his wounds on Thursday after he was hit by Israeli tank shell fired toward eastern Rafah, to the south of the blockaded Gaza Strip.

Israeli army fired a tank shell at two Palestinians when they approached the border fence hitting the two, who were rushed to Abu Youssef al-Najar hospital. One of them was pronounced dead shortly afterwards.

Sometime earlier, medical sources said one youth was in critical condition and the other sustained moderate injuries.

Hours earlier, the Israeli army stationed at the Gaza border had opened fire at four Palestinians who approached the fence injuring one, said to be 15 years of age, who was left bleeding on the ground until he was arrested by Israeli soldiers and taken into Israeli-occupied territory.
24 june 2018
Ministry of Health: 131 Palestinians Killed, Over 14 Thousand Injured in Great March of Return

The Palestinian Ministry of Health (MOH) in Gaza has issued an updated count of Palestinian casualties since the “Great March of Return” began on March 30th, in the besieged Gaza Strip.

The Ministry announced, late Sunday, that the total number of Palestinians killed by Israeli forces is 131, including 15 children and a woman, since the weeks-long massive demonstrations began.

The total number of injuries and gas inhalation was 14,811, of which 6,836 were treated in the field at medical points and 7,775 were treated in hospitals. Among the injured were 2,525 children and 1,158 women, according to the statement.

The ministry said that two paramedic, including a female paramedic were killed, and 229 medics were injured with live ammunition and tear-gas suffocation, while 39 ambulances were partly damaged.

Meanwhile, the Forum of Palestinian Journalists in the Gaza Strip said that two journalists, Yasser Murtaja and Ahmad Abu Hussein, were killed during the protests.

The forum added that 175 journalists were injured since the beginning of the marches.
Young man shot at Gaza protest pronounced dead

A Palestinian young man was proclaimed dead at dawn Sunday after he succumbed to a bullet injury he sustained last Friday during his participation in a March of Return protest staged on the Gaza border.

According to a spokesman for the health ministry, the young man is 29-year-old Osama Abu Khater. He died of a bullet injury in his abdomen during his presence in a border area east of Khan Younis.

After the death of Abu Khater, the number of March of Return martyrs have risen to 138 citizens, six of them still held by the Israeli occupation authority.
20 june 2018
Palestinian shot in Gaza protest succumbs to his wounds

A Palestinian young man shot by Israeli soldiers during Gaza border protests on 14 May has died from his wounds.

Local sources affirmed that Mohamed Abu Farhana, 23, was shot in by Israeli fire in one of the protests in the besieged protests during the past weeks and was admitted to Mar Youssef Hospital in occupied Jerusalem where he succumbed to his injuries on Wednesday.

Over 130 Palestinians have been killed by Israeli fire since the beginning of Great March of Return protests in late March.

Palestinians are calling to return to the homes their families were forced from in 1948 during the war surrounding the creation of Israel and for an end to the decade-long crippling blockade of the Palestinian enclave.

Following the massacre, the UN General Assembly adopted by a strong majority an Arab-backed resolution condemning Israel for the killing of protesters.

The resolution condemned Israel’s use of “excessive, disproportionate and indiscriminate force” against Palestinian civilians and called for protection measures for Palestinians in Gaza and the occupied West Bank.
Updated: “Cancer Patient Dies at Gaza Border Crossing With Israel After Repeated Denial of Medical Permit”

A Palestinian man, a cancer patient identified as Masoud Abdul Hai Abu Saqer, aged 49, died on Tuesday, at Erez/Beit Hanoun crossing between Gaza and Israel, while awaiting to be interviewed by Israeli security officers, to discuss his permit application to receive treatment at an East Jerusalem hospital, the Al-Mezan Center for Human Rights said, on Wednesday.

Al-Mezan said the patient had all needed referrals and documents to continue cancer treatment at Augusta Victoria Hospital, in occupied East Jerusalem.

Investigations by Al-Mezan revealed that the man previously submitted three applications to be allowed to leave the Gaza Strip for treatment in Al-Makassed Hospital in Jerusalem since he was officially diagnosed in December of 2017, but his applications were all denied.

His son, Saed Abu Saqer, 26, said his father was first interviewed by Israeli Intelligence officers at Erez Terminal on January 23rd, 2018, but instead of discussing his application to receive treatment, and examining his medical reports, the security officers were asking him about “activities of the resistance in Gaza,” and were trying to recruit him as an “informant,” in exchange for allowing him to receive treatment.

After his application was denied, he managed to leave Gaza through Rafah Border Crossing with Egypt, and was admitted to Nasser Hospital, where the surgeons removed his cancer-ridden right kidney.

After returning to Gaza, cancer cells spread to his abdomen and intestines, before he was referred to Augusta Victoria hospital in Jerusalem, but Israel denied his applications three times.

Seven Gaza patients, including three women, have reportedly died, since the start of this year, after their applications for an Israeli permit to leave the besieged Gaza Strip were either denied or delayed.
18 june 2018
Palestinian Child Dies From Serious Wounds Suffered In Gaza

The child, Zakariya Hussein Bashbash, 13, suffered a very serious injury, several days ago, after an Israeli soldier stationed across the border fence shot him with a live round.

The Health Ministry in Gaza said Zakariya, who was shot east of the al-Boreij refugee camp in central Gaza, was rushed to the Shifa Medical Center.

Zakariya, from the al-Maghazi refugee camp in central Gaza, was then moved to surgery, and remained at the Intensive Care Unit, until he succumbed to his serious wounds.

Palestinian child dies of his wounds in March of return events

The Palestinian Health Ministry announced on Monday the death of a 13-year-old child, Zakariya Beshbesh, of his wounds after being shot by Israeli occupation forces (IOF) in the events of the Great March of Return east of al-Buraij in central Gaza Strip.

The spokesman of the ministry, Ashraf al-Qudra, said that the slain child was receiving treatment in the intensive care unit at al-Shefa Hospital after his serious injury.

The martyrdom of Child Beshbesh brought the number of the martyrs of the Great March of Return to 136 including 7 martyrs whose bodies are still detained by the IOF. However, the injuries have jumped to 13,000 Palestinians.
Israeli Soldiers Kill One Palestinian In Gaza

Medical sources in Gaza said the Palestinian was rushed to the Shifa Medical Center, in Gaza city, before he was admitted to surgery, after suffering severe wounds.

ٍٍSabri was a newlywed young man, who got married only five months ago.  He was shot near Karni Crossing, east of Gaza city.

Israeli sources said some protesters continued to launch burning kites across the border fence, causing a new fire near Kissufim military base, in southern Gaza.

In related news, the Israeli army claimed that its soldiers observed two Palestinians, “who tried to breach the border fence,” and added that they carried explosives, which detonated while they were running back to Gaza, apparently wounding them.
14 june 2018
Palestinian Dies From Serious Wounds In Khan Younis

The Palestinian Health Ministry has reported, Thursday, that a young man, who was shot and seriously injured by Israeli army fire, has succumbed to his serious wounds.

He added that the young man was shot, several days ago, with an Israeli gas bomb which struck him directly in his head, causing very serious wounds.

The Palestinian was rushed to the Gaza European Hospital, in Khan Younis, in the southern part of the Gaza Strip, and remained in the Intensive Care Unit until he succumbed to his serious wounds.

His death brings the number of Palestinians, who were killed by Israeli army fire since March 30th, to 126, including two journalists and thirteen children.

The army also injured 13672 others, including hundreds of suffered serious wounds, mainly after being shot with expanding bullets.
Palestinian Dies From Wounds Suffered Eight Years Ago

Medical sources have reported, Wednesday, that a Palestinian man from northern Gaza died from serious complications caused by wounds he suffered after Israeli soldiers shot him eight years ago.

The sources said the man, identified as Kamal Mohammad al-Yaziji, from Beit Hanoun, in the northern part of the Gaza Strip, died from serious complications resulting from an Israeli bullet in his spine.

His family said Kamal was shot by live Israeli army fire in his spine, causing paraplegia, in addition to constant complications, including serious infections and skin breakdowns.

They added that Kamal also developed gangrene, followed by further serious infections that claimed his life.