Al Ray sources said that the occupation ordered the traders to close their shops in Salah al-Din, al-Sultan Suleiman, and al-Rashid streets, in the Old City district of Jerusalem.

The sources also explained that the soldiers spread out in Salah al-Din street and in the downtown area, ordering the traders to close their shops amid a state of tension .

Also on Monday, extremist Israeli settlers headed by the American-born rabbi Yehuda Glick resumed their regular raids on al-Aqsa Mosque, via the Moroccan gate, under heavy guard of Israeli police.

Jerusalemite sources reported that the settlers stormed the courtyards of the mosque in groups accompanied by rabbis.

The sources reported that known extremist rabbi Yehuda Glick tried to storm the courtyard of the holy mosque, but performed Talmudic rituals at Alqtanin gate.

A PIC news correspondent said at least 70 Israeli settlers, escorted by policemen and intelligence officers, broke into the al-Aqsa Mosque via the Maghareba Gate.

The Israeli extremist settlers defiled the plazas of the Mosque and attended sermons delivered by a fanatic rabbi on the counterfeit history of the alleged temple mount.

The assault sparked tension at and around the holy site, where the peaceful Muslim sit-inners and worshipers have maintained vigil.

The Israeli occupation cops have also been seizing the IDs of the Muslim worshipers at the main entrances to the Mosque. Dozens of Muslim worshipers have, meanwhile, been banned from entering the site to perform their prayers.
15 sept 2016
Israeli settler injured in alleged stabbing attack

An Israeli settler was injured Wednesday evening in an alleged stabbing attack in Ranana city within the Green Line.

Israeli media sources claimed that a 29-year-old Israeli settler was seriously injured after being stabbed by an unidentified man who managed to flee the scene.

Israeli police rushed to the area in large numbers and opened an investigation into the incident.

The injured settler was then transferred to Meir Hospital in Kfar Saba for treatment for treatment of serious upper-body injuries.
12 sept 2016
3-year-old girl among several Palestinians injured in Israeli assaults on 1st day of Eid

Several Palestinians, including a three-year-old girl, were left injured on Monday afternoon in Israeli assaults on the occupied West Bank provinces of Bethlehem and Nablus.

An Israeli army patrol discharged heavy barrages of teargas canisters, resulting in injuries and sparking panic across the area. The Israeli soldiers detained Muhammad Ali Salah for a couple of hours and seized his personal car before they ordered him to pay 1,700 shekels on allegations of holding an illegal car.

Violent clashes also rocked Tekoua’ town in the evening and spread to the area’s western entrance, where the IOF attacked Palestinian civilians and family homes with rubber bullets and teargas canisters.

Eyewitnesses said a military ambulance showed up at the scene to evacuate the casualties. Meanwhile, several Palestinians sustained injuries in Qasra town, in southern Nablus province, following clashes with the IOF.

Reporting from the scene, a PIC journalist said clashes burst out after Israeli settlers targeted Palestinian homes and citizens with gunfire.

Youngster Ibrahim Wadi sustained rubber-injuries in his face while Sanyour Saada was wounded with a live bullet in his back. Several youngsters were rushed to local hospitals to be urgently treated for the live bullet injuries and breathing disorders they sustained in the assault.

The occupation troops who suddenly showed up at the scene provided the settlers with a tight security shield before they attacked the Palestinian protesters with live rounds and teargas canisters. Activists called on the Palestinian locals via the mosque loudspeakers to stand firm against the Israeli attacks.
11 sept 2016
Israeli settler gangs defile Muslims’ Aqsa Mosque

Eyewitnesses said the Israeli assailants defiled the Mosque under the leadership of a fanatic Israeli tour guide. An armed officer and a black-dressed rabbi also escorted the horde.

The Israeli fanatics stood on a chapel in front of the Islamic Museum and received counterfeit sermons on the history of the alleged temple mount before they headed to the eastern wall, where they performed provocative rituals and chanted anti-Muslim slogans.

The holy al-Aqsa Mosque, Muslims’ third holiest site, has been the permanent target of Israeli aggressions and abrupt break-ins, in a barefaced attempt to wipe out Muslims’ presence and hold sway over the site.
10 sept 2016
6-year-old girl crushed to death by Israeli settler 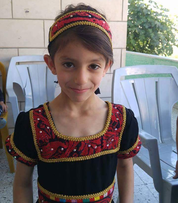 A Palestinian girl succumbed to her wounds on Saturday evening after she was hit by a car driven by an Israeli settler in Bethlehem’s southern town of al-Khader.

The Palestinian Health Ministry announced that six-year-old Lama Marwan Moussa was killed in a car-ramming attack by an Israeli settler in al-Khader town, in the southern occupied West Bank province of Bethlehem.

The casualty reportedly breathed her last in an Israeli hospital. Shortly afterwards, the Red Crescent said they received Lama’s body and transferred it to the Beit Jala public hospital pending the funeral procession on Sunday.

94 Palestinians, including minor boys and girls, have been killed in attacks by the Israeli occupation army and extremist settlers since the start of 2016.

The number of those killed since the start of the anti-occupation Jerusalem Intifada has gone up as high as 239.

Palestinian medical sources said that a child, six years of age, was killed on Saturday evening, after being rammed by a speeding Israeli colonist’s car in Um Rokba area, in the al-Khader town, south of the West Bank city of Bethlehem. She was identified as Lama Marwan Mousa.

Israeli medics were called to the scene, as the road is under Israeli control, and tried to revive the child, but she died from her wounds while being moved to a hospital.

Eyewitnesses said the child was struck by the car while trying to cross the road, right next to her family’s home.

Israeli sources said that the driver later turned himself in to the police, and claimed that what happened was just a traffic accident.

Following her death, the child’s body was turned over to Palestinian medics in the Nashash area, before being transferred to Beit Jala governmental hospital.

The Israeli army also said that a settler was injured, near al-Khader, when some Palestinian youngsters hurled stones at his car, after the child was killed.

A group of Jewish settlers on Thursday entered under military protection an archaeological area north of al-Khalil city with the intention of taking it over.

Local activist Mohamed Awad told the Palestinian Information Center (PIC) that dozens of settlers escorted by officers from the Israeli army's civil administration and the Shin Bet stormed Khirbet Jala area, west of Beit Ummar town in al-Khalil, and combed the archaeological location with its wells and caves using maps and laptops.

Awad expressed fears of Israeli intents to build a settlement or carry out a Judaization project on the historical site, where there is an ancient Islamic shrine.
8 sept 2016
Settler runs over elderly Palestinian farmer near Bethlehem

An Israeli settler deliberately ran over an elderly Palestinian farmer Thursday morning near al-Khuder town south of Bethlehem to the south of the occupied West Bank.

According to the PIC reporter, the farmer Hassein Mussa, 65, was hit and injured by a settler’s car at the main street in the town.

Israeli ambulance refused to transfer the injured old man to the hospital and left him bleeding for long hours till being moved by the Palestinian Red Crescent for treatment.

Residents of al-Khuder town are always subjected to Israeli hit-and-run attacks due to their strong resistance against settlement construction on their lands.

Palestinian Injured After Being Rammed By Colonist’s Car Near Bethlehem 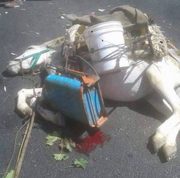 A Palestinian farmer from the al-Khader town, south of the West Bank city of Bethlehem, suffered several fractures and bruises, Thursday, after being rammed by a speeding Israeli colonist’s car, on a bypass road #60, used by both Palestinians and Israelis.

Medical sources said the wounded Palestinian man has been identified as Hussein Daoud Mousa, 65, and that he was heading back home.

It later became known that the settler who rammed the Palestinian is also a soldier with the Israeli military, and was driving a civilian car.

An Israeli ambulance was called to the scene, but the medics didn’t want to transfer the wounded man to an Israeli hospital and said he should be moved to a local Palestinian hospital, but his sons insisted especially since he was injured by an Israeli driver.

It is worth mentioning that the man was riding his donkey when the incident took place, and his donkey was also struck and wounded.

The soldiers also cuffed the wounded man’s son, after he rushed to the scene, and abducted him.
Israeli settlers groups break into al-Aqsa

A number of the settlers tried to perform rituals at the Islamic holy site, which angered Muslim worshipers and provoked them into chanting Takbeer loudly in protest against the settlers’ presence.

Meanwhile, several pro-Aqsa female activists, whose entry to the Aqsa Mosque is banned by the police, rallied outside the Islamic holy shrine and embarked on reading the holy Qur'an.

Tension remained high in and around al-Aqsa Mosque since early October 2015 after Israeli police repeatedly stormed the site and restricted Palestinians’ access into it, while allowing large numbers of settlers to access the holy site under heavy protection.
Appeals to UNESCO as Israeli settlers fence off Palestinian village

Israeli settlers residing in the illegal Leshem settlement, in western Salfit, isolated an ancient Palestinian village from all sides.

A PIC news reporter quoted eyewitnesses as saying that ongoing works to improve Leshem’s infrastructure at the expense of Palestinian lands led to the dismemberment of Dir Samaan village.

“From now on, in order for Palestinians to enter the village they will have to obtain permits from the occupation army after settlers fenced it off from all corners,” said a Palestinian native inhabitant.

Researcher Khaled Maali urged the UNESCO to put Dir Samaan village on the World Heritage List so as to prevent its annexation to the Leshem settlement.

Maali warned of the dangerous upshots of Israeli illegal settlement on Palestinian archaeological sites and historical monuments in Salfit, among other occupied provinces.

He added that the Israeli government aims at distorting facts on the ground and concocting a counterfeit Israeli history.
7 sept 2016
Israeli settlers storm al-Aqsa Mosque once again

A number of the Israeli settlers tried to perform Talmudic rituals in the al-Aqsa compound which led to a state of tension among Palestinian worshipers.

On the other hand, Israeli police continued to prevent a number of Jerusalemite women from having access to al-Aqsa for allegedly being involved in protests against settlers’ presence in the holy shrine.