Israeli soldiers shot and injured, on Friday evening, six Palestinians with live fire after the army opened fire on protesters, east of the Sheja’eyya area, east of Gaza city, and east of the al-Boreij refugee camp, in central Gaza.

Media sources in Gaza said the soldiers, stationed in Nahal Oz military base, across the border fence, east of the Sheja’eyya, fired many live rounds on Palestinian protesters who marched towards the security fence.

Two Palestinians were shot with live rounds in their legs, before Red Crescent medics moved them to the Shifa Hospital, east of Gaza.

Their injuries have been described as moderate; several others suffered the effects of tear gas inhalation.

In addition, four Palestinians were shot also by live army fire, east of the al-Boreij refugee camp, and were moved to the Al-Aqsa Hospital, suffering moderate wounds.

The Israeli army repeatedly opens fire on Palestinians who approach the border area, even without getting very close to it, and frequently attacks farmers in their own lands.

In related news, a Palestinian woman was injured, on Friday at night, after a number of Israeli fanatics assaulted her in Wadi Qana area, near Salfit city, in the occupied West Bank.

The woman suffered cuts in her arms, while many cars sustained damage after the several Israeli consists hurled stones on them.
Army Injures Four Palestinian Teens In Bethlehem 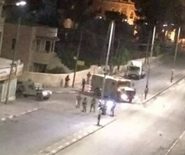 Clashes took place in the refugee camp after several armored Israeli military vehicles invaded it, and clashed with many local youths, who hurled stones and empty bottles at them.

The army fired dozens of live rounds, wounding four teenagers in the limbs, before Palestinian medics rushed them to Beit Jala governmental hospital for treatment.
Many Protesters Injured In Kufur Qaddoum

The Popular Committee against the Wall and Colonies in Kufur Qaddoum said dozens of soldiers invaded the village, and fired gas bombs and concussion grenades, causing dozens of residents to suffer the effects of tear gas inhalation.

The committee added that an Israeli military bulldozer damaged the main waterline, providing the village with its water, while trying to close one of the roads with sand hills.

The invasion led to clashes between the soldiers, and many local youths who hurled stones and empty bottles at the military vehicles.

In addition, the soldiers closed the village, since early-morning hours, and prevented media teams from entering it.

It is worth mentioning that the soldiers also used surveillance drones to film the protestors.
15 july 2016
Lieberman draws up plan to topple Hamas

The first order that Avigdor Liberman gave when he entered the Army Ministry in Tel Aviv, was to complete an operative plan to defeat Hamas in the Gaza Strip, Israel Pulse news site reported.

“Lieberman does believe that the Gaza Strip is ready to overthrow Hamas,” said Caspit. “The group’s standing among the general population is being challenged, and quite a few of the local clans and tribes are already seeking an alternative.”

“Lieberman believes that Hamas is the ultimate evil. As such, its regime must be brought down, and its growing stock of rockets, within touching distance of the southern city of Ashkelon, must be eliminated,” the article further read.

According to the same source, the army minister believes that if Israel doesn’t do that now, within just a few years it will have another Hezbollah on its hands.

“That is why Lieberman has instructed the Israeli (occupation) forces to prepare an operational plan to defeat and overthrow Hamas in the next round of fighting,” Caspit further noted.
Police admit mistakenly shooting Palestinian at Shuafat checkpoint

The Israeli occupation police backtracked on accusing a Palestinian young man of trying to carry out a stabbing attack on Thursday morning at the entrance to Shuafat refugee camp in Jerusalem.

The police also admitted that plain-clothes officers mistakenly opened fire at 22-year-old Yehya Hejazi, from Anata town in Jerusalem, during his presence at Shuafat checkpoint.

Hejazi, who has suffered eight bullet injuries in his legs as well as a leg fracture, underwent several surgeries at Shaare Zedek hospital, according to his family.

The family told the Palestinian Information Center (PIC) that its son had been exposed to brutal beating by Israeli soldiers after the shooting.

Hejazi told his family that he left his car at the checkpoint to stop a quarrel between two other young men when soldiers suddenly opened fire at him with no reason.
IOF erects surveillance cameras north of Bethlehem

The Israeli Occupation Forces (IOF) stormed Thursday Aida refugee camp south of Bethlehem and attacked a number of local residents before breaking into a nearby cemetery.

According to local sources, Israeli forces stormed a local cemetery in Aida camp and uprooted ten trees in the surrounding areas under the pretext of obscuring the Israeli soldiers’ vision.

Surveillance cameras were erected in the area to monitor the residents’ movement, a local activist affirmed. The sources pointed out that a group of rights activists were detained in the camp while several local homes were stormed and violently searched which led to the outbreak of violent clashes.

Undercover Israeli soldiers infiltrated, on Thursday evening, into the al-Mazra’a al-Gharbiyya village, north of the central West Bank city of Ramallah, shot thirteen Palestinians with live fire, and kidnapped one.

Eyewitnesses said the undercover soldiers infiltrated into the village, before breaking into the home of a young Palestinian, identified as Tareq Rabea’, and abducted him. Rabea’ is the coordinator of the Islamic Block at Birzeit University.

The abduction of the Palestinian led to clashes between the soldiers and many local youths; several army vehicles the invaded the village.

The undercover forces fired dozens of rounds of live ammunition, wounding thirteen Palestinians, including one who suffered a serious injury, the Palestinian Red Crescent said.

In addition, armed clashes also took place between resistance fighters and the soldiers after a number of military jeeps invaded the village from different directions.

Furthermore, clashes took place near Birzeit University after dozens of soldiers gathered near its main entrance. The soldiers fired gas bombs and live rounds, while many students hurled stones and empty bottles on them.
14 july 2016
Palestinian youth injured by Israeli soldiers near Shu’fat

A Palestinian youth at noon Thursday was shot and injured by the Israeli occupation forces (IOF) near the Shu’fat refugee camp on allegations of a stabbing attempt.

According to Israeli news sources, an undercover unit opened fire at a Palestinian youngster near the Shu’fat military checkpoint and arrested him right away.

Shortly after the shooting, Israeli border police troops rushed to the scene and sealed off the checkpoint.

An Israeli police statement claimed the youngster attempted to carry out an anti-occupation stabbing. The casualty sustained injuries in his hand and was dragged to an Israeli investigation center without treatment.

Army Injures One Palestinian, Kidnaps Another, In Jerusalem

The Israeli police said the man was mildly injured, and that the soldiers shot him after they allegedly noticed that he “carried a knife.”

The Palestinian Red Crescent Society in Jerusalem said the soldiers are still preventing its medics from approaching the wounded man, and that the soldiers closed the roadblock on both directions.

Clashes erupted after the soldiers invaded the refugee camp, and fired a few live rounds, rubber-coated steel bullets and gas bombs, at local youngsters who hurled stones on them.

The Israeli Police said members of its “Border Guard” units, were attempting to arrest a young Palestinian man from Shu’fat when another Palestinian attempted to obstruct them, and that the soldiers noticed a third young man, reportedly “carrying a knife and approaching them rapidly,” before they shot him.

Spokesperson of Fateh movement in Jerusalem Tha’er Fasfous, said the wounded young man was trying to remove a knife from the hand of another young man, known to be a drug addict.
IOF soldiers open fire at farms in southern Gaza

Local sources said that the IOF soldiers opened intermittent fire at agricultural land lots east of Fukhari village to the east of Khan Younis in the southern Gaza Strip.

The IOF soldiers systematically open fire at Palestinian lands on Gaza borders endangering lives of the residents and preventing them from accessing their land.
Army Injures Three Palestinians Near Ramallah 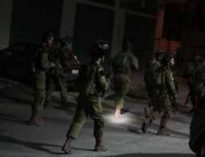 The WAFA Palestinian News Agency said a large military force invaded the village from various directions before the soldiers stormed and violently searched many homes, leading to excessive property damage.

WAFA added that owners of some of the invaded homes have been identified as Mohammad Taha, Ibrahim Mohammad Yousef, Yousef Taha and Ibrahim Saleh.

The invasion led to clashes between the soldiers and local youths who hurled stones and empty bottles at the army vehicles, while the soldiers fired gas bombs, concussion grenades, and rubber-coated steel bullets. 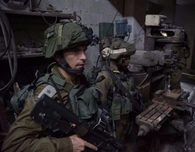 As the extensive Israeli military invasion into the southern West Bank district of Hebron continues to escalate, the soldiers destroyed, on Thursday morning, water wells, and the entrances of several Palestinian homes.

Also in Hebron, the army invaded Farsh al-Hawa area, and the area around the al-Ahli Hospital, before storming a residential building, and violently searched several apartments. During the invasions, the soldiers detonated three Palestinian water wells. 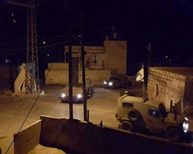 Israeli soldiers invaded, on Thursday at dawn, the southern West Bank city of Hebron, and several nearby towns, stormed homes after detonating their doors, searched and ransacked the properties, and kidnapped at least six Palestinians.

The soldiers detonated the front doors of many Palestinian homes in Hebron city, and violently searched the properties while interrogating the terrified families.

In addition, the soldiers kidnapped two Palestinians in the al-‘Arroub refugee camp, three in Hebron city, and one in Ethna village.

Local sources in Hebron said the soldiers invaded Be’er al-Mahjar area, in the city, surrounded an apartment building and an under-construction building near the al-Ahli Hospital, and detonated the doors of seven homes before searching them, and ransacking their furniture and belongings.

During the home invasions in Hebron city, the soldiers kidnapped two Palestinians, identified as Khaled Abu Za’rour and Rajaey al-Hroub.

Similar invasions of homes and property were also reported in the towns of Bani Neim, Ethna, Tarqoumia, Sa’ir and Shiokh.

According to a statement by the Israeli army, the soldiers raided 19 blacksmith workshops in Hebron since the beginning of the year, reportedly used for manufacturing weapons, in addition to locating more than 200 weapons.
Israeli Air Force Fires Missiles Into Farmlands In Central Gaza 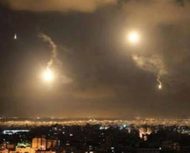 The WAFA Palestinian News Agency has reported that an F16 Israeli fighter jet fired one missile into a farmland, east of al-Boreij, causing damage.