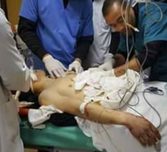 Two Palestinians have been injured; one suffered a life-threatening injury, on Friday evening, after Israeli soldiers stationed in fortified military towers, across the border fence, opened fire at several Palestinians in their lands, close to the border fence, in Beit Lahia, in the northern part of the Gaza Strip.

Medical sources in Gaza said the soldiers fired many live rounds, including sniper fire, at the Palestinians, seriously wounded one Palestinian with a bullet in his abdomen, while another Palestinian suffered a moderate injury in his right leg.

Palestinian ambulances sped to the scene of the Israeli attack, and rushed the two Palestinians to the Indonesian Hospital, in northern Gaza.

Also on Friday evening, the soldiers opened fire at Palestinian shepherds and their herds, in northern Gaza.

The other Palestinian sustained moderate injuries in his leg and shoulder. Both were rushed to the Indonesian Hospital in Gaza.

Hebrew-speaking outlets claimed gunshots were fired from Gaza toward the Ashkelon coastline.

Israeli Occupation Forces (IOF) attacked Friday evening a group of Palestinians in Azzoun town, east of Qalqilya city, and arrested some of them. Others were also interrogated in the field by Israeli soldiers.

Local sources told the PIC reporter that Israeli troops stopped about 15 Palestinians, mostly women and children and questioned them.

Two men were arrested and taken to unknown destinations. They were identified as Samir Shabita and Omar Hussein, the sources elaborated.
Journalist injured in Israeli quelling of Kafr Qaddoum march

A Palestinian journalist was injured in Israeli quelling of Kafr Qaddoum weekly march against separation wall and settlement. The march also demands opening the town’s main street which has been closed for 14 years.

He was injured by a rubber bullet in his head. Medical crews treated him in the field, Eshtaiwi added.

Israeli troops unleashed tear gas bombs, in addition to rubber bullets, at participants in the peaceful march leading to many suffocation cases among Palestinians.
Israeli forces quell solidarity march with prisoners in Qalandiya

According to Quds Press, dozens of Palestinians participated in the peaceful march in solidarity with both hunger striking captives: Jamal Abu Al-Lail and Mohammad Al-Qiq.

Israeli forces showered participants with tear gas and stun grenades while they were approaching Qalandiya's barrier. The forces closed the military checkpoint and blocked traffic because of the solidarity march amid intensive deployment of Israeli military forces.

Clashes erupted between Israeli troops and activists who took part in the march, Quds Press highlighted.

Both prisoners have been going on open hunger strike in protest at being held under the illegal administrative detention without trial or charge.
2 mar 2017
IOF artillery shelling targets resistance sites in northern Gaza

The PIC reporter said that the IOF fired six artillery shells that slammed into two resistance sites to the east of Beit Lahiya with no casualties inflicted.

He said that one of the two sites was targeted at two separate intervals, and quoted medical sources as saying that no casualties were suffered.

The Israeli Channel Ten said that the Israeli artillery shelling was in retaliation to the shooting at an Israeli army patrol.
Gaza: IOF opens fire at homes north of Beit Lahia

Eyewitnesses said that Israeli soldiers stationed along the northern border of Beit Lahia opened machinegun fire from their heavy military vehicles and watchtowers at Palestinian homes and lands.

Luckily, no one was injured in the gunfire attack. Several homes only sustained material damage.

An Israeli military helicopter also overflew the coastal area of Gaza City while firing flares after the Israeli army claimed a rocket projectile from Gaza landed in an open area in Ashkelon beach near Gaza.
20 West Bank citizens kidnapped in overnight IOF campaigns

The Israeli occupation forces (IOF) last night and at dawn Thursday kidnapped 20 Palestinians from different areas of the West Bank.

In al-Khalil, Israeli soldiers stormed at an early hour in the morning Beit Awa town in the west and kidnapped three young men from their homes.

The detainees were identified as Omar Masalmeh, Ghazi Farouk and Ali as-Suwaiti.

Another military force stormed last night ad-Dhahiriya town south of al-Khalil, raided homes and clashed with local young men near the house of martyr Sa’ad Qaisiya, who carried out a stabbing attack in the city.

Local sources in Awarta town told the Palestinian Information Center (PIC) that five citizens were kidnapped from their homes and taken to Huwara military base before being released later.

Another IOF campaign was carried out in Beita town, where a school teacher called Mohamed Mu’alla was taken prisoner following a raid on his home.

Locals from the camp reported hearing explosions believed to have resulted from throwing homemade bombs at soldiers.

According to a press release issued by the Israeli army, 20 Palestinians labeled as wanted were arrested during overnight campaigns in the West Bank.

The army said in its statement that its forces raided a Palestinian printing press in ad-Deheisheh refugee camp in Bethlehem, confiscated its equipment and shut it down, claiming it was used to print inflammatory materials.

During the IOF campaign in the camp, the soldiers clashed with local young men and intensively fired tear gas grenades at them and nearby homes.

A 12-year-old child called Hammam Radi was reportedly kidnapped from the camp. It is still unclear if he was among the seven young men arrested during the violent events.

In Occupied Jerusalem, violent skirmishes broke out last night between Israeli policemen and young men in Kafr Aqab town, with no reported arrests.

11 Palestinians sustained wounds on Thursday in clashes that flared up in Abu Dis town, in eastern Occupied Jerusalem.

The Palestinian Red Crescent said six protesters were treated for bullet injuries sustained in clashes with the Israeli forces in Abu Dis.

Five Palestinians reportedly choked on teargas in the clashes.

According to local sources, the Israeli soldiers showered Abu Dis town and the environs of the Quds University with teargas grenades and rubber bullets.

Israeli military bulldozers on Thursday morning carried out a limited incursion into an eastern border area in Khan Younis, south of the Gaza Strip.

The PIC correspondent reported that four armored bulldozers and three Israeli Merkava tanks came from the Kissufim military base and combed the border area before infiltrating dozens of meters into the eastern areas of the city.

Eyewitnesses affirmed that the military vehicles were advancing into the Palestinian territory amid heavy presence of Israeli snipers to provide protection for the military bulldozers.

Without any regard to the 2014 ceasefire agreement in Gaza, the Israeli army persists in carrying out limited incursions into the eastern border areas of Gaza to bulldoze lands, and allows its troops to open fire during these operations.
1 mar 2017
Army Injures Several Students Near Ramallah, Abducts Six

Palestinian medical sources have reported, Wednesday, that several Birzeit University students suffered the severe effects of teargas inhalation, near Bet El colony and security center, near Ramallah in the occupied West Bank, after the soldiers assaulted them while protesting the abduction of many students near Ofer Israeli prison a day earlier.

The soldiers also abducted six students in another protest near Ramallah.

The sources said that the students, and some residents, suffered severe effects of teargas inhalation, near Beit El roadblock, close to the northern road of al-Biereh city.

The students were marching to protest the abduction of several students, who were taken prisoner by the soldiers, Tuesday, near the main gate of Ofer Israeli prison, during a procession in solidarity with the hunger striking Palestinian detainees.

Media sources in Ramallah said Palestinian security officers tried to prevent the students from protesting close to Beit El roadblock, but many managed to reach it, before the soldiers started firing gas bombs and rubber-coated metal bullets at them, while some protesters hurled stones and empty bottles.

Many Palestinians suffered the severe effects of teargas inhalation, and received the needed treatment by local medics.

In related news, the soldiers abducted six Birzeit University students, three males and three females, during a protest near Betunia roadblock, west of Ramallah, after the army alleged they were masked, and hurled stones on them.

PIC reporter said the incursion was carried out via four army jeeps deployed at the Sofa military base, east of Rafah.

At the same time, Israeli warplanes kept hovering over the territory all the way through the infiltration.