Israeli army vehicles deliberately launch incursions every now and then into the border areas north and east of the Gaza Strip and prevent Gazan farmers from approaching them.
MPs, Hamas leader among several Palestinians kidnapped by IOF

A PIC news correspondent said the IOF stormed the southern West Bank province of al-Khalil and rummaged into the home of prisoner Tareq Id’is before they seized his father’s car.

Another MP—Anwar Azaboun (Hamas)—along with the senior Hamas leader Hassan al-Wardian and the lecturer at the Quds Open University Ghassan Hirmas were kidnapped by the Israeli forces from Bethlehem.

Hamas MPs Hassan Youssef, Ahmed Mubarak, Mohamed Jamal al-Natsha and Azzam Salahab are currently serving administrative sentences in Israeli jails with neither charge nor trial. Other MPs, including  Marwan al-Barghouti and Ahmed Saadat, have also been held in Israeli lock-ups.

The IOF further ravaged the home of the Palestinian citizen Mootaz al-Ja’bah and summoned him to questioning in Etzion camp.

At the same time, the occupation army wreaked havoc on civilian homes near Gharnata (Granada) School.

Violent clashes flared up in Sebastiya town, in northern Nablus, on Sunday evening shortly after the Israeli occupation forces (IOF) rolled into the area and lowered the Palestinian flag.

IOF soldiers stormed Nablus and lowered a Palestinian flag raised on a flagpole set up in Sebastiya’s archaeological zone before they attacked the Palestinian protesters with heavy spates of teargas canisters and rubber bullets.

The Palestinian anti-occupation youth responded to the assault by hurling stones and empty bottles at the heavily-armed Israeli patrols.

According to eyewitnesses, an Israeli military jeep took off the entrance door of a Palestinian home in Sebastiya by tying it to the jeep by an iron chain.
10 Palestinians kidnapped, others injured by IOF in predawn sweeps

At least 10 Palestinians were kidnapped by the Israeli occupation forces (IOF) and others were left injured at daybreak Sunday in assaults on the West Bank and Jerusalem.

The Israeli army claimed responsibility for the abduction of 10 Palestinians on allegations of involvement in anti-occupation activities.

The campaign targeted seven Palestinians from Bethlehem province, two from al-Khalil, including a Hamas affiliate, and another Palestinian from Jerusalem’s eastern town of al-Izriya.

The IOF further stormed Tekou’ town and carried out an arbitrary abduction sweep.

28-year-old Palestinian poet Mahmoud Ayad, nicknamed al-Mourabit, was kidnapped by the Israeli forces from his home in al-Duheisha camp, south of Bethlehem.

Israeli military drills are expected to swamp the occupied Palestinian territories and the environs of the blockaded Gaza Strip on Sunday.

The Israeli Channel 7 quoted the army spokesman as stating that air force drills will be carried out near Gaza.

Red alert sirens will be sounded all the way through the maneuvers.

The drills allegedly come to boost the army potentials in projected Israeli offensives on Gaza.

A few days ago, a report by the Israeli state comptroller on the fallouts of the 2014 Israeli war on Gaza scorched the Israeli Prime Minister Benjamin Netanyahu and the army for their failure to prepare adequately for the threat of Hamas tunnels.
Israeli army bulldozers move into blockaded Gaza Strip

Artillery tanks escorted the bulldozers all the way through the infiltration.

The Israeli bulldozers leveled Palestinian lands in the area. At the same time, Israeli drones kept hovering over the territory.
4 mar 2017
Israeli policeman wounded in stone throwing in Occupied Jerusalem

﻿An Israeli policeman was injured on Saturday evening after clashes with Palestinian youths erupted in Silwan town in Occupied Jerusalem.

The Hebrew 0404 website revealed that the policeman was lightly injured after Palestinian youths threw stones and fireworks at policemen south of al-Aqsa Mosque.

Eyewitnesses said that Israeli forces stormed the town amid shooting and firing of tear gas grenades which resulted in the eruption of clashes with Palestinians.
Soldiers storm Nablus overnight, clash with young men

Local sources reported that Israeli soldiers were deployed in Tal Balata area, the eastern district of the city and al-Shuhada junction.

They added that the soldiers clashed with local young men and violently attacked them with volleys of tear gas and stun grenades in the areas of Ras al-Ein and al-Basha in the Old City of Nablus.

They also said that a young man from al-Zarba family was arrested near the Western Cemetery.

In a separate incident, Israeli troops stormed on the same day Qaryut town, south of Nablus, and threatened residents in the western neighborhood of taking punitive measures against them if they did not remove Palestinian flags from street light poles.
Israeli army forms new brigade to deal with tunnel infiltrations

The Israeli occupation army has created a new brigade responsible for rapidly dealing with the threat which cross-border tunnels poses to settlements near the Gaza Strip.

According to Israel’s Channel 2, the new brigade will be composed of hundreds of border soldiers and will start its drills in the coming days.

The brigade will be trained on how to give an initial and quick response to infiltrations into border towns by hostile groups from Gaza, the channel said

The channel noted that the brigade would operate in all the southern cities and towns (settlements) located near the border with Gaza, including Ashkelon and Ofakim.

It said that the mission of the brigade would be preventive until the arrival of especially trained units to deal with the situation, adding that members of this task force would be equipped with high-tech means, weapons, vehicles and drones.
Non-violent demonstrators march to stolen water well in Nabi Saleh, where Israeli colonizers attack them 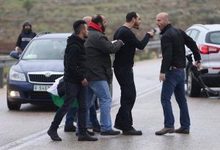 In Nabi Saleh village Friday, a group of Palestinian, Israeli and international peace activists held a non-violent march to the location of a water well which was seized by armed Israeli colonial militia fighters in the area. The demonstrators were then attacked by both Israeli soldiers and armed colonizers.

Among those who participated in the protest were members of a delegation of US Veterans, who wrote an extended account of their experience at the protest. They observed that the Israeli colonial militia members appeared to be most focused on attacking women, children, and people with cameras, while leaving the larger adult male veterans alone.

A video of the incident shows Israeli settler militia members rushing into a crowd of protesters and grabbing, pushing and beating people. Israeli soldiers, as if to provide backup for the violent assault, fire tear gas and concussion grenades at the demonstrators.

Throughout the video, the international and Palestinian non-violent activists can be heard chanting “1-2-3-4 Occupation no more”. The Israeli settler militia members also push down the videographer at one point, as well as attacking another journalist wearing a bright vest labelled ‘PRESS’.

According to that article, “The Nabi Saleh Solidarity Campaign – led by Bassem Tamimi, who was once designated a “prisoner of conscience” by Amnesty International when he was jailed by Israel for his activism – hold their demonstrations to protest against the theft of their land and water by Israelis who live opposite the hilltop village in the settlement of Halamish.”

That article continues, “They are clashes that have sometimes cost the lives of Palestinians. Bassem Tamimi’s brother-in-law Rushdi died after being shot at another protest in 2012 while Tamimi was in prison. Another member of the extended family died after being hit in the face by an Israeli teargas canister.”

Most recently, 16-year old Ahed Tamimi was denied a visa to travel to the US to participate in a speaking tour. According to Nora Barrows-Friedman of the Electronic Intifada, the visa for Ahed Tamimi was put into “administrative review” by the US consulate without an explanation.

Tamimi is part of a family known for their activism work in the village, where residents have long resisted Israeli land confiscation for nearby settlement colonies. In August 2015, Tamimi, her mother and her aunt intervened to rescue her 12-year-old brother from an attempted abduction by an Israeli soldier. The incident was caught on video.
Israeli Soldiers Invade Two Towns Near Jenin 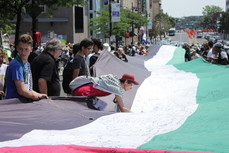 Several Israeli army vehicles invaded, on Friday evening, the towns of Zabbouba and al-Yamoun, west of the northern West Bank city of Jenin, and installed roadblocks near many communities in the area.

Media source in Jenin said the soldiers invaded the two towns, drove in their neighborhoods in a provocative manner, and withdrew later.

There have been no reports of clashes with the invading soldiers, or abductions carried out by the army, during the invasions.