Hebrew daily Yedioth Ahronoth said on Sunday that an Israeli drone strike had killed Yasser al-Sayyid after targeting his vehicle in Quneitra area in the Syrian Golan Heights on Sunday evening.

Four Israeli bulldozers, D9 type, on Sunday morning advanced a limited distance into the northern area of Beit Hanoun in northern Gaza Strip and started leveling land, according to the PIC reporter.

In the evening, Israeli Occupation Forces (IOF) opened gunfire at Palestinians’ agricultural lands east of Rafah city in the southern Gaza Strip resulting in no casualties or damages.

On a semi-daily basis, the IOF soldiers target Palestinian farmers and hunters along the eastern border line between the besieged coastal enclave and 1948 Occupied Palestine.
Israeli military maneuvers sweep Negev

The Israeli forces on Sunday morning launched a round of massive military maneuvers across Negev city.

The drills are expected to be wrapped up next Wednesday.

Red sirens are expected to be set off across Negev starting 11:05 a.m. on Tuesday.
Arrests reported in West Bank sweep by IOF 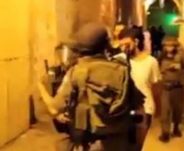 A number of Palestinian civilians were kidnapped by the Israeli occupation forces (IOF) at daybreak Sunday in assaults launched across West Bank provinces.

At predawn time, the IOF kidnapped the Palestinian citizen Saeb Alawna as he passed through a makeshift checkpoint set up on the access road to Nablus.

In the meantime, a flock of Israeli military jeeps rolled into Nablus’s eastern towns of Beit Furik and Beit Dajan at the crack of dawn and raked through residential neighborhoods for over one hour before they retreated to the Beit Furik checkpoint.

At the same time, hordes of Israeli settlers have been spotted in makeshift tents pitched in Beit Dajan’s eastern corners.

Overnight, the IOF stormed Beita and Ourata, south of Nablus, and showered the area with acoustic grenades, sparking clashes with Palestinian protesters.

Violent clashes erupted on Saturday between Palestinian youths and Israeli Occupation Forces (IOF) at the entrance of al-Aroub refugee camp north of al-Khalil resulting in the injury of an Israeli soldier.

The PIC reporter pointed out that the IOF troops showered Palestinian demonstrators with bullets and tear gas grenades leading to suffocation cases among protesters.

He quoted eyewitnesses as saying that clashes broke out after the funeral of martyr Murad Abu Gazi who was killed on Friday in Israeli shooting inside the camp.
Israeli airstrikes renewd on the Gaza Strip

Israeli warplanes on Saturday afternoon carried out strikes on a resistance site in al-Meqousi area northwest of Gaza city.

The PIC reporter said that Israeli warplanes fired at least two missiles on al-Yarmouk site which is affiliated to al-Qassam Brigades, the armed wing of Hamas Movement. No injuries were reported.

The PIC reporter also quoted local sources as affirming that Israeli artillery shelled on Saturday morning an observation post of al-Qassam Brigades as well as border areas in the northern Gaza Strip with no reported casualties.

Israeli soldiers fired, on Saturday at dawn, several shells into Palestinian agricultural lands, in the northern part of the besieged Gaza Strip.

Media sources in Gaza said the soldiers, stationed in military bases across the border fence, fired the shells into land, close to the border area, in Beit Lahia, and added that the attack did not lead to any casualties.

Israeli sources claimed the shelling was carried out after a shell was fired from Gaza, and landed in an open area in the Regional Council in Asqalan.
17 mar 2017
Injuries in IOF quelling of anti-settlement marches in West Bank

Two Israeli peace activists were injured, and a number of Palestinian citizens choked on tear gas on Friday after the Israeli occupation forces (IOF) quelled two anti-settlement and anti-occupation marches in Ni'lin and Kafr Qaddum towns in the occupied West Bank.

Local sources reported that IOF soldiers fired sound bombs and tear gas canisters at the protesters in Ni'lin anti-settlement, anti-wall weekly march as they approached the apartheid wall built on the town’s lands.

They added that Palestinian youths managed to climb the wall and raise the Palestinian flag on it.

The march set off after Friday prayer, and the marchers raised Palestinian flags as well as portraits of the American activist Rachel Corrie, who was killed by an Israeli bulldozer in the Gaza Strip on 16th March 2003, and the activist Triston Anderson, who was hit by an Israeli rocket-propelled grenade that caused him permanent paralysis in Ni'lin on 13th March 2009.

Meanwhile, two Israeli peace activists were injured and dozens of suffocation cases were reported among Palestinian citizens after the IOF quelled the anti-settlement peaceful march of Kafr Qaddoum which called for opening the town's street that has been closed for 14 years.

The coordinator of the popular resistance in Kafr Qaddum, Murad Shtewi, said that the IOF fired rubber-coated metal bullets and tear gas canisters at the marchers injuring the two activists, one in the hand and the other in the face, and causing dozens of suffocation cases that were treated in the field.

The IOF soldiers stormed the town, raided the houses, and stationed on the roofs to fire tear gas canisters at the marchers. They also took pictures of participants and set up ambushes.

The Israeli occupation army stormed at daybreak Friday Ramallah and al-Bireh, in the central West Bank.

According to local sources, Israeli soldiers rolled into Ramallah and al-Bireh via al-Tira road and raked through southern residential neighborhoods.

No arrests were reported in the assault.

Ramallah and al-Bireh province falls under Area A supposedly run by the Palestinian Authority (PA).
Israeli warplanes hit with anti-craft missiles from Syria

An Israeli army spokesman said Israeli warplanes struck Syria targets overnight before they were hit by anti-aircraft missiles. One of the missiles was intercepted by the Israeli forces.

Sometime earlier, sounds of heavy blasts were detected near Irbid and in the occupied Palestinian territories. Red Sirens were also heard in Israeli settlement outposts.

No injuries or material damage were reported in the attack.

Palestinian fishermen sailing within the authorized fishing zone off Gaza’s coast have been attacked by the Israeli navy on a quasi-daily basis.
Israeli Air Force Fires Missiles Into Various Areas In Gaza

After alleging a “rocket” was fired from Gaza, and struck an open area in an Israeli settlement in the Negev, that Israeli Air Force fired missiles into grounds run by the Al-Qassam Brigades, the armed wing of Hamas, and into Palestinian lands, causing damage.

Media sources in Gaza said an Israeli drone fired a missile into a Qassam site, and almost instantly, followed by a missile from an Israeli fighter jet, destroying an entire building, without causing casualties.

The sources added that another missile struck vacant lands in the Zeitoun neighborhood, in Gaza Strip, and close to Karni cargo crossing, east of Gaza, causing damage.