Several Palestinians, including a 14-year-old minor, were kidnapped by the Israeli occupation forces (IOF) at predawn Thursday in mass abduction sweeps launched across the West Bank and Jerusalem.

The IOF kidnapped seven Palestinians from the northern West Bank province of Qalqilya.

A PIC news correspondent said the IOF rolled into Qalqilya city in over 20 military jeeps and attacked the Palestinian protesters with spates of teargas canisters, resulting in several suffocation cases.

The list of arrestees included ex-prisoner Tahseen al-Adl, who was kidnapped by the IOF from his own family home.

The occupation army further stormed Qalqilya’s eastern town of Azzoun, where Palestinian vehicles and civilians were subjected to thorough inspection.

Abu Nawas was later dragged to an anonymous location in an armored military truck.

Overnight, Palestinian citizen Bashar Mleitat, from Nablus’s eastern town of Beit Furik, sustained wounds after he had been heavily beaten by the Israeli soldiers.

The Israeli soldiers also stormed Attil town, in Tulkarem, in a number of army vehicles and kidnapped the youngster Youssef al-Shalabi before they wreaked havoc on his family home and attacked his relatives.

A military checkpoint was also pitched by the IOF in al-Mesriyeh Mount.

Palestinian citizen Muthana al-Sadala was kidnapped by the Israeli soldiers from his home in Anabta town, east of Tulkarem.

Meanwhile, another Palestinian citizen was kidnapped by the IOF from Bethlehem.

At the same time, the Israeli forces set up ambushes across Jenin province and a checkpoint on the Jenin-Haifa access road, near the main entrance to Zabouba town, where Palestinian drivers have been made to endure intensive questioning.

The Israeli occupation army on Wednesday evening deployed troops and dozens of heavy military vehicles and equipment in the vicinity of Aqraba town, southeast of Nablus, and the nearby southern area of Attaira.

Eyewitnesses told the Palestinian Information Center (PIC) that they saw dozens of military tracked vehicles and artillery equipment in Attaira area, adding that many mobile homes were also brought to the area.

Locals expressed their belief that these military deployments in areas near Aqraba town could be a prelude to conducting military drills.
22 mar 2017
Clashes flare as IOF rolls into eastern Nablus

A PIC reporter quoted eye-witnesses as stating that the IOF rolled into al-Haouz mountainous area, in Beit Furik town, and forced the Palestinian farmers out of their lands, sparking violent clashes with dozens of Palestinian anti-occupation youths.

The Israeli Occupation Forces (IOF) violently suppressed a peaceful march organized in Bethlehem to the south of West Bank demanding the return of slain Palestinians’ bodies held in Israeli morgues.

According to the PIC reporter, the march came in coincidence with a court hearing held in the Israeli Supreme Court in occupied Jerusalem to decide over the appeals submitted by the dead Palestinians’ families.

The march kicked off at the northern entrance of the city amid large participation of national and Islamic figures and local activists.

The participants held photos of the slain Palestinians and slogans demanding the immediate release of their bodies.

Israeli forces suddenly fired a barrage of teargas bombs at the protesters; dozens choked on teargas.

Speaking to the PIC reporter, head of the PA committee for prisoners and ex-prisoners Issa Qaraqe stressed the urgent need to internationalize the slain Palestinians’ issue, condemning the Israeli collective punishment policy against Palestinian people.

A number of injuries were reported among Palestinian students as clashes with raiding Israeli policemen broke out near Jerusalem University in Abu Dis town to the east of occupied Jerusalem.

Eyewitnesses told the PIC reporter that the clashes erupted after Israeli police forces stormed the town and were deployed in the vicinity and at the entrance of the University.

Several students suffered breathing problems after inhaling teargas fired by Israeli forces, while a state of tension has prevailed in the campus.
Israeli army launches limited incursion into blockaded Gaza

A PIC news correspondent said four Israeli military bulldozers deployed at the Kissufim base moved into the eastern edges of Khan Younis city and leveled Palestinian lands in the area.

At the same time, barrages of gunshots were fired from Israeli military watchtowers toward al-Qarara, east of Khan Younis. No injuries were reported in the attack.
21 mar 2017
Israeli soldiers crack down on Palestinian drivers in Tulkarem

The Israeli occupation forces on Monday evening cracked down on Palestinian drivers passing through Anab checkpoint, east of Tulkarem province, in the northern West Bank.

According to local sources, Israeli soldiers deployed at Anab checkpoint stopped Palestinian drivers and threatened to subject them to harsh penalties in case they give a lift to anti-occupation activists.

The fishermen were reportedly sailing within the authorized four-nautical-mile zone.

At the same time, mock-raids were launched by the Israeli fighter jets over Gaza.

The incidents represent others chains in the series of Israel’s violations of the Cairo-brokered truce accord struck with the Palestinian resistance following the 2014 war on the besieged coastal enclave of Gaza.
Israeli Soldiers Abduct Thirteen Palestinians In The West Bank 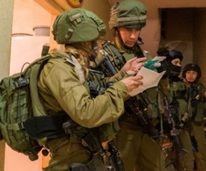 Israeli soldiers abducted, overnight and at dawn Monday, at least Thirteen Palestinians, including a young female student, in different parts of the occupied West Bank, the Palestinian Prisoners’ Society (PPS) has reported.

The PPS in Ramallah, in central West Bank, said the soldiers abducted five Palestinians, including the young student, from several areas of the district.

It identified the young woman as Estobroq Tamimi, 22, from the al-Ram town, north of Jerusalem, and added that she was taken prisoner from her student dorm in Birzeit University.

It is worth mentioning that al-Hreimi was repeatedly abducted and imprisoned by the army, and held a fifty-day hunger striking, protesting his illegal Administrative Detention without charges or trial, before he was released only two months ago.

In addition, many army vehicles invaded the al-Jalazoun refugee camp, in Ramallah, before the soldiers searched homes and abducted two siblings, identified by their first names as Mohammad, 19, and Ibrahim, 21.