After a fire broke out shortly before landing, Capt. Ohad Cohen Nov, returning from reprisal airstrikes in Gaza , was killed and a navigator lightly wounded after they were forced to abandon their F-16 plane; circumstances surrounding the fire remain unknown, IAF commander launches investigation.

An Israeli Air Force F-16 pilot, Capt. Ohad Cohen Nov was killed Wednesday after being forced to abandon his plane just before landing at the Ramon Airbase in the Negev.

It later emerged that Cohen Nov had been returning to the base following a wave of IAF reprisal airstrikes against Hamas targets after a rocket was launched into the Israeli city of Sderot on Wednesday morning.

The aircraft's pilot and navigator ejected from the plane when it began to catch fire, leaving the navigator lightly wounded. Israel Air Force Commander Amir Eshel, ordered an immediate investigation into the circumstances surrounding the cause of the fire.

Cohen Nov was 34 years old and lived on teh Ramon Airbase. He was a deputy squadron leader. The IDF Spokesperson announced that the military expressed its condolences to his family.

The incident was cleared for publication on Wednesday evening after the victims' families had been notified. 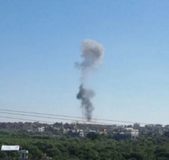 For the second time in just a few hours, The Israeli Air Force and army fired several shells and missiles, on Wednesday, targeting various areas of the Gaza Strip, after a shell was fired earlier into Sderot, in the Negev.

The Israeli Air Force fired at least one missile into the Naval Police base, northwest of Beit Lahia, in the northern part of the Gaza Strip, causing excessive damage.

Another missile struck an agricultural land, close to a gas station, also in northern Gaza, and twice targeted with artillery shells an open area, east of Gaza city.

In addition, the army missiles into a training site for the Al-Qassam Brigades of Hamas, west of Khan Younis, in the southern part of the Gaza Strip.

Also Wednesday, the army fired artillery shells into a camp run by the Al-Qassam Brigades, east of Beit Hanoun, in northern Gaza.

Dr. Ashraf al-Qedra, the spokesperson of the Health Ministry in Gaza, said the attacks did not lead to casualties.
Several Palestinians Injured In Jerusalem

soldiers invaded, late at night Tuesday, the towns of al-‘Ezariyya and Abu Dis, in occupied Jerusalem, and clashed with many local youths before firing gas bombs, concussion grenades and rubber-coated steel bullets, causing many Palestinians to suffer the effects of teargas inhalation.

The soldiers invaded the two towns, southeast of Jerusalem, from various directions, and fired many rubber-coated steel bullets, gas bombs and concussion grenades, during clashes that lasted for several hours.

Eyewitnesses affirmed that the shelling targeted a resistance training site east of Beit Hanoun north of Gaza. No injuries were reported during the attack.

On the other hand, Israeli sources claimed that two Israeli settlers have been treated for shock after a rocket fired from Gaza Strip landed in Sderot. Sderot Mayor Alon Davidi told Yediot Ahranot Hebrew newspaper that the rocket fell next to his house.

Palestinian resistance factions did not confirm or deny firing the rocket.

Israeli soldiers fired, on Wednesday at noon, an artillery shell into a site run by the Al-Qassam Brigades, the armed wing of Hamas, east of Beit Hanoun town, in the northern part of the Gaza Strip. The army said it was retaliating to a shell fried from Gaza.

The shell into the Qassam site caused property damage but no injuries, media sources in Gaza said.

The Israeli army said the bombarded took place after a shell was fired from Gaza into Sderot town, in the Negev.

Israeli Ynet News said the shell caused no property damage, while a 15-year-old girl and a 60-year-old man “were treated for shock before they were moved to Barzelai Medical Center in Ashkelon.”

Earlier Wednesday, the Israeli army and navy opened fire on Palestinian fishers in Gaza territorial waters, and farmers in their lands, in the besieged Gaza Strip.
Israeli Soldiers, Navy, Open Fire On Fishers, Farmers And Shepherds In The Gaza Strip

Media sources in Gaza have reported that an Israeli tank fire one shell into a Palestinian agricultural land, east of the Zeitoun neighborhood in Gaza city.

They added that soldiers stationed on military towers in the Nahal Oz base, fired many live rounds at farmers and shepherds east of the Sheja’eyya neighborhood, east of Gaza city.

In addition, navy shops fired many live rounds at fishing boats in the Sudaniyya area, northwest of Gaza City, causing damage, and also forcing the fishers back to shore.

A similar attack targeted many fishing boats near Khan Younis, in the southern part of the coastal region, causing property damage.

The shepherds and farmers had to run out of their own lands, while the fishers sailed back to shore in fear of additional escalation.

The Israeli army and navy carry out frequent attacks against workers, famers and shepherds, especially near border areas, in the northern and eastern parts of the besieged and improvised coastal region, in addition to ongoing attacks against the fishers in Palestinian territorial waters.
1 oct 2016
IOF arrests Palestinian at Zaatara checkpoint near Nablus

Local sources affirmed to the PIC reporter that Hamza Abu Arra was driving to Ramallah when Israeli forces stopped and searched his car at Zaatara checkpoint.

Abu Arra was then taken in a military vehicle to an unknown detention center.

Dozens of Palestinians are monthly detained at Israeli permanent and make-shift checkpoints throughout occupied Jerusalem and West Bank.

Local sources told the PIC reporter that Israeli forces erected a military checkpoint between Zarya and Balaa towns in Tulkarem, where several Palestinian vehicles were stopped and searched.

Israeli forces also stormed Quven town, south of Tulkarem city, and investigated a number of local residents leading to tension in the town.

The Palestinian national office for the defense of land and resistance of settlement said Saturday that Israeli military training in Jordan Valley aims at confiscating large dunums of the area.

The office pointed out that the Israeli military drills came as part of the Israeli government’s displacement policy which aims to displace Palestinians from the Jordan Valley and confiscate their lands.

On the other hand, the office warned of a new settlement plan to build a new illegal settlement at the expense of Palestinian-owned land estimated at 170 dunums south of occupied Jerusalem. The new plan includes the establishment of 493 housing units and a synagogue.

An Israeli report has recently revealed that 78% of the alleged military zone declared since 1967 are used for settlement expansion.
30 sept 2016
Two Palestinians arrested as IOF quels Bilin weekly march

Local sources identified the two detainees as Abdul Fattah Bernat and Hamouda Sabawi. The participants were violently attacked and chased by the IOF within the town’s neighborhoods amid heavy firing of teargas bombs and rubber bullets.

During the march, the protesters chanted slogans against Israeli continued attacks against Islamic and Christian holy sites, holding photos of the prisoner Yasser Hamdouni who recently died in Israeli jails due to deliberate medical neglect.

The Popular Committee in Bil’in said the protesters marched towards the gate of the Annexation Wall, before the soldiers assaulted them, and kidnapped five, including two Palestinians who were forced out of a car.

The Committee added that the soldiers also abducted two activists; one Israeli and one from Britain.

The protesters marched towards the memorial of Bassem Abu Rahma, where he was killed after a soldier fired a gas bomb that directed struck him in the chest, in April of 2009.

It is worth mentioning that Bassem’s sister, Jawaher Abu Rahma, was killed by the army on January 1, 2011.

The soldiers also assaulted journalists and forced them away, under the allegation that the area is a “closed military zone.”

The Popular Committee said the protests will continue despite the escalating Israeli violations, and added that the Palestinians are protesting for their legitimate rights, for their lands and livelihoods.
IOF rolls into Jenin, pitches random checkpoints

The Israeli occupation forces (IOF) at dawn Friday rolled into Jenin province, in the northern West Bank, and pitched a series of makeshift checkpoints.

A PIC news correspondent said Israeli infantry units were deployed in the Almaniya area, to the east of Jenin, and set up ambushes across the main bypass road.

Other IOF troops reportedly sealed off Jenin’s southern corners. A military checkpoint was also pitched by the IOF on the entrance to Yabad town, where Palestinian civilians have been subjected to intensive searches and interrogation.