28 dec 2016
Confrontations with IOF in Nablus

Confrontations erupted on Wednesday evening between Palestinian youths and the Israeli occupation forces (IOF) after the latter broke into al-Masaken al-Shaabiyya neighborhood to the east of Nablus city.

Eyewitnesses told the PIC reporter that a number of Palestinian youths threw stones and Molotov cocktails at the Israeli soldiers who fired sound and gas bombs in the neighborhood.

Ambulances and Red Crescent crews came to the neighborhood to deal with any injuries that might be caused among the citizens as a result of the excessive gas bombs fired by the Israeli soldiers.

The IOF erected on Wednesday evening a flying checkpoint at the northern entrance of Nablus city, hindered the movement of vehicles, and scrutinized the citizens' identity cards.
Arrests, raids carried out across West Bank

The Israeli Occupation Forces (IOF) launched at dawn Wednesday a large-scale raid and arrest campaign throughout the West Bank.

IOF claimed that 12 Palestinians were detained for being allegedly “wanted” for investigation.

According to the sources, four Palestinians were arrested in Nablus while five youths were kidnapped in Jenin, in addition to two other young men from Ramallah.

The Israeli sources claimed that a shooting took place at dawn today when Israeli forces stormed Jenin where a weapons workshop was allegedly discovered.

Meanwhile, Israeli forces stormed in large numbers the city of Nablus and arrested three young men and injured three others.

Violent raids were carried out in the city which led to the outbreak of clashes during which three local youths were injured with rubber bullets.

Military checkpoints were also erected throughout the city, while a blacksmith was stormed under the pretext of looking for weapons.

Dozens of local houses were violently stormed and searched including ex-prisoners’ houses.

The Israeli army on Monday evening stormed Azzun town, east of Qalqilya in the West Bank, closed its main entrance and clashed with local young men.

Local sources told the Palestinian Information Center (PIC) that a large number of Israeli soldiers blocked the main road to Azzun with barriers and then entered the town.

During their presence in the town, soldiers severely beat a Palestinian citizen near the local cemetery and brutalized others, which provoked local youths to clash with them and threw them with stones.

The military force, for its part, intensively fired tear gas grenades at the young men, the sources added.

Meanwhile, another Israeli military force set up a makeshift checkpoint at the main entrance to Hajja village near Qalqilya and obstructed the movement of citizens and vehicles.
26 dec 2016
Palestinian youth injured with live fire during clashes near Joseph's Tomb

A Palestinian youth was injured with live fire by Israeli forces during clashes Monday at dawn near the Balata refugee camp south of Nablus in the northern occupied West Bank, as hundreds of Israeli settlers visited Joseph’s Tomb, located near the refugee camp.

Local sources told Ma’an that Mahdi Dweikat, 20, was injured by with live bullets in his foot, while others suffered from suffocation due to severe tear gas inhalation.

An Israeli army spokesperson told Ma'an that overnight the Israeli army escorted the entrance of Israeli worshipers to Joseph's Tomb.

"Israeli forces identified a Palestinian hurling a fire bomb, and in response fired towards him. He was likely injured and evactuated to a hospital."

Joseph’s Tomb is located in Area A, the 18 percent of the West Bank officially under full PA control. However, Israeli forces regularly carry out military activities in Area A, in breach of the Oslo Accords.

Joseph's Tomb -- revered by Jews, Muslims, Christians, and Samaritans -- is the site of regular visits by Israelis, who are escorted by Israeli military forces to the area, often leading to clashes with local Palestinians.

Under the 1993 Oslo Accords, Joseph's Tomb was to remain under Israeli control, but the Palestinian Authority (PA) took over the site after the Israeli army withdrew during the Second Intifada.

As part of security cooperation with the PA, the Israeli army allows Jewish worshipers to make monthly pilgrimages to the site.

However, ultra-Orthodox and nationalist Jews also regularly try to visit the shrine without approval, as many Jews believe the tomb to be the final resting place of the biblical figure in the Old Testament.

Palestinian security forces very rarely apprehend Israelis in the occupied Palestinian territory, as they do not have jurisdiction over Israeli citizens.

As a result, violations by Israeli settlers or soldiers against Palestinians often go unpunished, as Israeli authorities rarely prosecute Israeli citizens in such cases, or issue light sentences, which has been criticized by activists and rights groups as fostering a “culture of impunity.”

Hundreds of Israeli settlers stormed at dawn Monday Youssef Tomb east of Nablus which led to the outbreak of violent clashes in the area.

According to the PIC reporter, at least one young man was shot and injured during the clashes by Israeli occupation forces (IOF).

The injured young man was left bleeding without receiving any medical care before being arrested.

Israeli forces were deployed in large numbers throughout the area amid heavy firing of teargas bombs and live ammunition.

Several suffocation cases among Palestinian civilians were reported during the clashes.

On the other hand, IOF soldiers arrested an ex-detainee after breaking into his family house in Nablus only two weeks after his release from Israeli jails.

A military checkpoint was erected at the entrance to Beit Furik east of the city early today.

Three more arrests were carried out in occupied Jerusalem while another young man was kidnapped in Aroub refugee camp in al-Khalil.

Meanwhile, violent clashes broke out in Qabatia town, south of Jenin, when Israeli forces stormed the area and confiscated a Palestinian-owned vehicle.

A number of local residents were interrogated during the raid.

A make-shift checkpoint was further erected at the entrance of Kafer Dan to the west of Jenin where several Palestinian cars were stopped and searched.

Similar confrontations were reported in Tubas as Israeli forces stormed an ex-detainee’s house in Tamun town and summoned him for investigation. 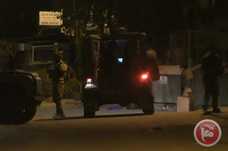 Israeli forces detained at least 10 Palestinians, including two minors, during overnight raids in the occupied West Bank, according to the Palestinian Prisoner’s Society (PPS).

In the southern occupied West Bank district of Hebron, Israeli forces detained Majid Tayser al-Titi for the al-Arrub refugee camp and Ismail Ahmad Hawamda from the village of al-Samu.

Local sources in Hebron told Ma’an that Israeli forces installed several checkpoints in the north and south of the district, stopping and searching Palestinian vehicles.

Awad said that Israeli forces searched the homes of Issa Mousa Rashid Awad, Zaid Awad, 35, and a small shop that sells cigarettes and tobacco. Forces used the dogs during the searches, which caused damages to the homes.

Awad said that Israeli forces also assaulted Zaid Awad as he tried to prevent the soldiers from entering his house, adding that Israeli soldiers beat him in front of his wife and children and allowed a police dog to attack him.

An Israeli army spokesperson said they were looking into reports of the raid, the use of dogs, and the assault of of Zaid Awad.

An Israeli army spokesperson confirmed a total of four detentions to Ma’an, citing one “Hamas operative” from Nablus, one detainee from Qatanna, one from the al-Arrub refugee camp, and another “Hamas operative” in al-Samu.

Separately, the Israeli army published a video on Monday that shows Israeli forces detaining four Palestinians that were throwing rocks at Israeli settler cars along route 55 in the occupied West Bank.

The army did not publish the names of the detainees or the name of the exact location that the incident took place.
25 dec 2016
Israeli forces open fire at Palestinian farmers in Gaza

According to the witnesses, Israeli soldiers stationed in watchtowers near the border fence east of the town of Khuzaa fired gunshots while Palestinian farmers were trying to reach their lands. No injuries were reported.

An Israeli army spokesperson told Ma’an in response to a request for comment that after "suspects reached the border area with Israel, forces fired warning shots into the air and the suspects left the area."

Israeli military incursions inside the besieged Gaza Strip and near the “buffer zone" which lies on both land and sea sides of Gaza, have long been a near-daily occurrence.

Palestinians who work near the “buffer zone” between the Palestinian enclave and Israel often come under fire from military forces, as the Israeli military has not made clear the precise area of the designated zone.

The Israeli army regularly open fires on Palestinian fishermen and farmers along the border areas, despite a ceasefire agreement that ended the 2014 war.