Undercover Israeli soldiers infiltrated, on Wednesday evening, into the West Bank city of Ramallah, kidnapped a young Palestinian man, and took him to an unknown destination.

Eyewitnesses said the undercover soldiers were driving an unmarked car, before assaulting the young man as he was stepping out of a coffee shop, and forced him into their vehicle.

They added that the soldiers also fired many live rounds into the air while kidnapping the young man, and drove towards army vehicles waiting just outside of the city.
Israeli Soldiers Invade Office Of Legislator Dr. Mustafa Barghouthi

As part of massive Wednesday dawn invasions and breaking into homes, media centers and buildings, Israeli soldiers also invaded the office of Palestinian Legislator and the head of the Palestinian National Initiative, Dr. Mustafa Barghouthi.

The soldiers broke into Dr. Barghouthi’s office, in Ramallah, amidst massive and violent invasions into dozens of homes, offices and media centers in different parts of the occupied West Bank, leading to excessive property damage, and many abductions.

Dr. Saeb Erekat, a member of the Executive Committee of the Palestine Liberation Organization (PLO), strongly condemned the invasions and violations, that resulted in abducting, and wounding, dozens of Palestinians.

Dr. Erekat added that the invasion into the office of Dr. Barghouthi, a democratically-elected legislator, is a serious and direct violation of International Law, international treaties, and all signed agreements between Israel and the PLO.

“This is a violent, cowardice attack, it is a calculated Israeli escalation and aggression, meant to create further violence and tension,” Dr. Erekat said, “The invasion into the Health, Development, Information and Policy Institute” (HDIP), the detonation of its walls, doors and windows, and the illegal confiscating of computers and equipment, is a direct Israeli political message to the International Community defying all international laws with impunity. Israel is targeting our people, our elected officials, our lands, holy sites, media and health centers…”

Dr. Erekat added that the Israeli army carried out more than twenty-two invasions into the occupied territories in less than twenty-four hours.

“This Israeli hysteria and the deliberate targeting of representatives and elected figures, the escalating invasions and violations, will just lead to further tension and violence,” he said, “The International Community is required to act and provide the urgently-needed protection to the Palestinian people, living under this illegal occupation and constant violations.”
16 nov 2016
12 Palestinians injured in East Jerusalem clashes with IOF

A PIC news correspondent said Israeli military vehicles rolled into Jerusalem’s eastern town of Abu Dis and cordoned off the environs of Al-Quds University before they cracked down on Palestinian youth.

The IOF attacked the Palestinian protesters with randomly-shot spates of sound bombs and teargas canisters, resulting in several injuries.

The Palestinian anti-occupation protesters responded by hurling stones on the occupation soldiers.

Red Crescent crews said they treated at least 12 Palestinians for injuries inflicted by the occupation troops.

Two Palestinians sustained fractures and were rushed to hospital for urgent treatment. Others were treated for critical breathing disorders due to heavy teargas inhalation.

The IOF stepped up crackdowns on Palestinian anti-occupation youth since the outburst of the Jerusalem Intifada (uprising) in early October, 2015, sparking violent clashes across the occupied Palestinian territories.
IOF displaces 16 Palestinian families in Jordan Valley

The Israeli Occupation Forces (IOF) forced Wednesday 16 Palestinian families to evict their houses in the Jordan Valley under the pretext of conducting military drills in the area.

The Israeli crews gave the families 24 hours to evict their houses before the start of military drills, the sources added.

Basharat pointed out that 68 family members, mostly children, will remain homeless during the military drills.

Dozens of soldiers invaded, on Wednesday at dawn, the Health, Development, Information and Policy Institute, in the central West Bank city of Ramallah, after detonating many doors and walls, violently searched it and injured three students.

Dr. Mustafa Barghouthi, a member of the Public Committee of the “Health, Development, Information and Policy Institute” (HDIP), said more than eight Israeli military vehicles invaded the Institute campus, before the soldiers detonated many of its doors and walls, and illegally confiscated equipment, including computers.

Barghouthi, denounced the serious Israeli violations, especially since the institute’s area of work is health and human rights, and considered it another attempt to silence health and legal human rights groups, and journalists.

The soldiers fired many gas bombs, and concussion grenades, at students in the Institute, wounding three.
Israeli Soldiers Abduct Two Palestinians In Hebron

The soldiers stormed and searched many homes, and confiscated surveillance tapes from the invading properties, in addition to interrogating many Palestinians.

It added that clashes took place in the refugee camp, after the soldiers invaded it, and that the soldiers fired live rounds, gas bombs and concussion grenades at youngsters who hurled stones on the military vehicles. 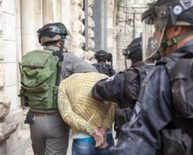 Israeli soldiers invaded, on Tuesday evening, Ras al-‘Amoud neighborhood, in Silwan town, south of the Al-Aqsa Mosque in occupied Jerusalem and kidnapped a young Palestinian man. The army also invaded Hizma and al-‘Eesawiyya towns, in Jerusalem, and clashed with dozens of youngsters.

In addition, the soldiers invaded Hizma town, northeast of Jerusalem, and clashed with dozens of local youths, who hurled stones and empty bottles on the invading army vehicles, while the soldiers fired gas bombs and rubber-coated steel bullets.

Israeli navy ships attacked, on Tuesday evening, Palestinian fishing boats near the shore in the Sudaniyya Sea, in Gaza, and abducted two fishers.

The WAFA Palestinian News agency has reported that the navy attacks the fishing boats in the Sudaniyya Sea area, near Gaza city, while they were sailing less than four nautical miles from the shore.

It added that the navy used water cannons against the fishing boats, before abducting two fishers identified as As’ad Omar and Ammar Sultan, in addition to confiscating their boats, and took them to the Ashdod Port.

The attack is part of daily violations against the fishers in Palestinian territorial waters, in addition to assaults targeting farmers and workers in Palestinian lands, in areas close to the border fence, in the besieged coastal region.

The Israeli Occupation Forces (IOF) carried out overnight and at dawn Tuesday a large-scale raid and arrest campaign throughout occupied West Bank.

At least 13 Palestinians were detained during the campaign while several homes were stormed and searched.

A young man was arrested after Israeli forces violently broke into Asker refugee camp east of Nablus amid heavy fire of teargas bombs and live ammunition which led to the outbreak of violent clashes.

His family members were detained for several hours during the raid, while his father suffered teargas suffocation problem.

A big mess was left in the house after Israeli soldiers’ withdrawal.

On the other hand, Israeli forces arrested a Palestinian child near the Ibrahimi Mosque for allegedly possessing a knife.

The child was then transferred to Ofer military center for investigation.

In Jenin, clashes broke out in Anin and Zabouba towns after Israeli forces stormed the two towns amid heavy use of teargas bombs.

Several injuries were reported during the clashes.

Similar raids were carried out in Beit Ummar town in al-Khalil where several homes were stormed and a number of local youths were summoned for investigation including an-detainee.

The fishermen were reportedly sailing within the six-nautical-mile zone authorized by the Israeli occupation navy.

The fishermen went ashore right away for fear of being killed or kidnapped in the assault.