A Palestinian youth was injured on Wednesday afternoon after being shot by the Israeli occupation forces (IOF) south of al-Khalil city.

The PIC reporter said that Marwan al-Asous, 28, who is from Burin village in Nablus province, was transferred to a local hospital after he was shot with a live bullet by the IOF in the industrial area of al-Khalil.

Medical sources said that Asous was shot in the foot and described his health condition as stable.
Army Invades Farmlands, Spray Toxins, In Borders Areas In Gaza

On Wednesday, the WAFA Palestinian News Agency has reported that two armored bulldozers, three tanks and bulldozers, stationed at a military base across the border fence, invaded Palestinian agricultural lands, east of Jabalia, in the northern part of the coastal region, while Israeli planes also sprayed lands with toxins.

The soldiers advanced approximately 300 meters into the lands, and started uprooting them, while firing many live rounds, forcing the Palestinians away, while military drones flew overhead.

In addition, Israeli aircraft sprayed many areas of agricultural lands with toxins, in the eastern part of the besieged Gaza Strip, for the second consecutive day.

The lands are planted with wheat, barley, Okra, melons, and several other types of plants that provided livelihood to many families.

The army considers border areas in the besieged Gaza Strip off-limits to the Palestinians, including what it calls the “buffer zone”.

This includes large areas of lands, while the agricultural lands that are close to the fence became a frequent target for invasions and bulldozing, and the army also repeatedly opens fire at the Palestinians while working on their lands. 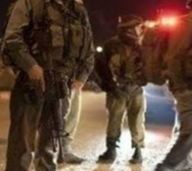 The Palestinian Prisoners Society (PPS) in Bethlehem, has reported that the number of Palestinians, abducted by Israeli soldiers, at dawn Wednesday, in the West Bank governorate of Bethlehem, has arrived to nine, while one of them was shot and seriously wounded by army fire.It stated that the soldiers abducted Mo’tasem Raqaban, Ahmad Issa Sarrar, and Bara’ Jamil Abu ‘Alia and Ahmad Sar’awi, from their homes in Deheishe refugee camp, south of Bethlehem.

It is also mentioning that the soldiers shot al-Atrash with three live rounds in his back and shoulder, seriously wounding him, before local medics moved him to Beit Jala governmental hospital.

Updated From:
Army Seriously Injures One Palestinian, Abducts Eight, In Bethlehem – Apr 5, 2017 @ 08:10
Israeli soldiers invaded, on Wednesday at dawn, the Deheishe refugee camp, south of the West Bank city of Bethlehem, and clashed with local youths, before shooting and seriously injuring a young man, and abducted eight Palestinians during violent searches of homes, in Bethlehem district, including three in Deheishe.

The soldiers fired many live rounds, wounding a young man, identified as Akram Omran al-Atrash, 23, with three live rounds in his back and shoulder, seriously wounding him, before local medics moved him to Beit Jala governmental hospital.

His cousin, lawyer Farid al-Atrash, said the hospital is currently conducting all needed arrangements to move him to Hadassah Hospital, in Jerusalem, due to the seriousness of his condition.

A Palestinian young man was seriously wounded and others kidnapped by the Israeli occupation forces (IOF) in abduction sweeps launched at daybreak Wednesday.

Reporting from Bethlehem, a PIC news correspondent said violent clashes burst out in Duheisha camp, to the south of Bethlehem, shortly after the IOF stormed the city.

23-year-old Akram al-Atrash was seriously wounded by two Israeli bullets that hit his chest and shoulder. He was rushed to Beit Jala Hospital and was later transferred to a medical center in 1948 Occupied Palestine (Green Line) after his health had taken a serious turn for the worse.

The IOF attacked the Palestinian protesters with live rounds and teargas grenades.

Three Palestinian youngsters in their early 20s were kidnapped by the IOF from their family homes in the camp.

The Palestinian anti-occupation youth responded to the assault by hurling homemade explosive devices, Molotov cocktails, and stones at the occupation patrols.

The IOF soldiers also stormed the nearby Doha town and kidnapped a Palestinian youth—Baraa Abu Aliya—after they ravaged his family home.

Three Palestinian young men were further kidnapped by the IOF from their homes in Bethlehem’s western village of Nahalin.

Late on Tuesday evening, the IOF soldiers broke into Bethlehem’s southern and western towns of Khader and Husan and cordoned off both villages with makeshift checkpoints, before they kidnapped the Palestinian minor Mohamed Rashed al-Shaer from Husan village. He was later released following exhaustive questioning.

Meanwhile, three Palestinians were kidnapped by the Israeli forces from Qalandiya camp, south of Occupied Jerusalem.

The IOF also wreaked havoc on civilian homes in the camp.

The campaign culminated in the abduction of the Palestinian lawyer Luay Sa’abna from his home in Jenin’s southern town of Fahma, in the northern West Bank.

The occupation soldiers seized the lawyer’s car, moments after they broke into his home and cracked down on his family members.
4 apr 2017
Army Fires At Homes, Lands, In Southern Gaza

Israeli soldiers, stationed across the border fence, east Khan Younis, in the southern part of the Gaza Strip, fired dozens of live rounds at homes and lands, causing property damage.

Media sources in Khan Younis said the soldiers, on several towers across the border fence, fire many live rounds, and flares, hitting Palestinian agricultural lands, and many homes.

The latest Israeli violation did not lead to any casualties, but caused heavy damage to homes and property, while many Palestinians, mainly children, suffered anxiety attacks.

The attack is part of ongoing Israeli violations against the Palestinians in the besieged Gaza Strip, and frequently target homes, farmers and workers, in areas close to the fence, in addition to assaults against fishermen, in Palestinian territorial waters.
Israeli military drills sweep Palestinian lands east of Nablus

The Israeli occupation forces on Tuesday morning carried out large-scale military maneuvers in Khirbet al-Tawil, near Nablus’s eastern town of Akreba, in the northern West Bank.

Speaking with PIC, activist Hamza al-Akrebawi said the Israeli soldiers rolled into Khirbet al-Tawil at the crack of dawn and closed off all access roads to the area, paving the way for the maneuvers.

Palestinians farmers and civilians have also been denied access into their farmlands and workplaces.

According to the activist, over 30 Israeli tanks and troop carriers have been spotted in Khirbet al-Tawil, at the same time as dozens of soldiers have been stationed near civilian homes, sparking tension in the area.

Khirbet al-Tawil, a home to 100 Palestinian civilians, has been the permanent target of Israeli military drills, which often result in heavy damage on civilian homes and on Palestinian cultivated lands.
Hundreds of Israeli settlers storm Joseph’s Tomb

According to eyewitnesses, over seven buses carrying hundreds of Israeli settlers rolled into Nablus’s eastern zone under heavy police escort.

Overnight, Israeli military patrols cordoned off the environs of the tomb as they set the stage for the break-in.

Clashes flared up in the area between the Israeli soldiers and the Palestinian anti-occupation youth in Amman Street and near the northern entrance to Balata refugee camp, east of Nablus. The occupation forces attacked the Palestinian protesters with randomly-discharged barrages of teargas canisters.
3 apr 2017
Israeli evacuation orders in Jordan Valley

The Israeli Occupation Forces (IOF) forced on Monday dozens of residents of Ras al-Ahmar village in Jordan Valley to vacate their houses for military drills.

The local activist Azmi Basharat affirmed to the PIC reporter that ten Palestinian families living in the village were made to take their flocks and leave the area until the training was over.

The community, which lives in the Jordan Valley some four kilometers east of the Palestinian town of Tammun, is located near a number of Israeli military camps.

The residents are routinely ordered to vacate their homes for several days to make way for military training, most recently was ten days ago.
Israeli forces storm Shu’fat Camp, fine Palestinian drivers

According to eyewitnesses, an Israeli patrol broke into Shu’fat through a nearby military checkpoint then the soldiers started to fine Palestinian drivers on unjustified grounds.

Earlier, on Saturday, a round of overnight clashes burst out in Shu’fat between IOF soldiers and a group of Palestinian anti-occupation youths.

During the clashes, the occupation soldiers stormed the home of the Palestinian ex-prisoner Khaled al-Haddad.

The Palestinian protesters responded by hurling stones at the Israeli patrols.

The Israeli army has frequently cracked down on the Palestinians of Shu’fat camp and ravaged civilian structures in the area under the security pretext.
Gunmen attack Salem military base west of Jenin

Gunmen, believed to be from the Palestinian resistance, opened fire on Sunday night at the Israeli Salem military base, west of Jenin city in the occupied West Bank, and withdrew from the area.

Local sources told the Palestinian Information Center (PIC) that the armed men were aboard a vehicle during their gunfire attack on the base and managed to escape the scene, adding that the Israeli army combed nearby areas in search for the shooters.

They added that it was the third time such attack on the base happened within one month.

They also said dozens of Israeli troops stormed, amid intensive gunfire, the nearby towns of Silat al-Harithiya, Yamun, Zabbuba and Rummanah to look for the attackers.