Israeli soldiers assaulted, Friday, the weekly nonviolent protest against the Annexation Wall and colonies, in Ni’lin village, west of Ramallah in the occupied West Bank, and wounded a young Palestinian man before abducting him.

The soldiers invaded the village, and attacked the weekly procession by firing live rounds, rubber-coated steel bullets and gas bombs.

One Palestinian, identified as Mohammad Abdul-Qader ‘Amira, was shot before the soldiers abducted him.

The extent of his injury remains unclear, as the soldiers took him to an unknown destination, after preventing the Palestinians, including medics, from approaching him.
Israeli Soldiers Injure Four Palestinians With Live Fire In Tubas

Israeli soldiers invaded, Friday, Tubas city, in the northeastern part of the occupied West Bank, and clashed with local youths, before shooting four with live fire, and causing many to suffer the effects of teargas inhalation.

Medical sources in Tubas said four young men suffered moderate wounds, after being shot with live fire, and were moved to the Tubas Turkish Governmental Hospital.

The sources added that many Palestinians received treatment for the severe effects of teargas inhalation, without the need for further medical treatment.
Army Injures Three Palestinian Children In Kufur Qaddoum

Israeli soldiers attacked, Friday, the weekly protest in Kufur Qaddoum town, in the northern West Bank district of Qalqilia, and shot three children with rubber-coated steel bullets, in addition to causing many protesters to suffer the effects of teargas inhalation.

He added that the soldiers also fired a barrage of gas bombs, some targeting local ambulances, causing dozens of Palestinians to suffer the effects of teargas inhalation.

Eshteiwy also stated that this week’s protest comes in solidarity with the Palestinian detainees, who plan to start an open-ended hunger strike on April 17, which marks the Palestinian Prisoners’ Day.

Kufur Qaddoum residents, accompanied by Israeli and international activists, hold weekly protests against the illegal Israeli Annexation Wall and colonies, in addition to demanding the army to reopen the town’s main road, which was completely sealed 14 years ago to enable easy access to the settlers, living in Kedumim colony, built on private Palestinian lands.
Female journalist, marchers injured by Israeli army in Bethlehem

Dozens of protesters, including a journalist, were left wounded on Friday afternoon after the Israeli occupation forces (IOF) attacked a march in Bethlehem calling for the release of dead bodies.

Reporting from the scene, a PIC field correspondent said Palestinian journalist Islam al-Amarna was injured with the shrapnel of an acoustic bomb that exploded underneath her feet. She was rushed to the Beit Jala Hospital so as to be urgently treated for the wounds inflicted by the attack.

The Israeli army patrols targeted the marchers with randomly-unleashed spates of teargas canisters and acoustic bombs.

Dozens of protesters choked on tear gas after the IOF aggressively disbanded the march calling for the release of the bodies of slain anti-occupation youngsters.

The march kicked off from Merra crossroads on way to a flashpoint adjacent to Bilal Ibn Rabah Mosque.

The protesters lifted the pictures of slain anti-occupation youngsters whose bodies have been withheld by the Israeli occupation authorities.
Israeli Soldiers Open Fire On Farmers And Fishers In Gaza 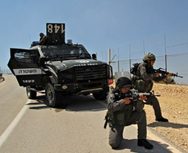 Israeli soldiers opened fire, on Friday morning, on farmers, and fishers, in Palestinian agricultural lands, and territorial waters, in several parts of the besieged and impoverished coastal region.

The WAFA Palestinian News Agency said the soldiers, stationed on a number of military towers across the border fence, east of Khan Younis in the southern part of the Gaza Strip, fired many live rounds at Palestinian farmers, working on their lands, close to the border fence.

It added that a similar attack targeted farmers and their lands, in Johr ed-Deek area, in central Gaza, forcing the Palestinians away.

In related news, Israeli navy ships opened fire on Palestinian fishing boats in Gaza waters, in the northern part of the coastal region.

On Thursday evening, the soldiers abducted a young Palestinian man, who reportedly crossed the border fence, in northern Gaza, and took him to an unknown destination.
Israeli naval forces open fire at fishermen of northern Gaza coast

Head of the Gazan fishermen union Zakariya Bakr told Ma’an the Israeli naval boats opened machine gun fire at fishing boats while they were sailing three nautical miles into the sea, inside the boundaries of the six nautical mile limit set by Israel.

The Israeli army regularly detains and opens fire on unarmed Palestinian fishermen, shepherds, and farmers along the border areas if they approach Israel’s unilaterally declared “buffer zone,” which lies on both the land and sea sides of Gaza.

The practice has in effect destroyed much of the agricultural and fishing sector of the blockaded coastal enclave.

Gazan fishermen, whose numbers are estimated to be around 4,000, have suffered from the near decade-long siege of the Gaza Strip, which limits their incursions to just six nautical miles into the sea in accordance with the ceasefire agreement signed with Palestinian factions in 2014.
13 apr 2017
Israeli forces launch limited incursion into blockaded Gaza

The Israeli bulldozers moved into Palestinian lands at the same time as three army tanks were stationed near the border fence.
Israeli Soldiers Attack Students In Al-Quds University, Wound Twenty-Four

Israeli soldiers attacked, Thursday, dozens of Palestinian students, protesting near the campus of Al-Quds University, in Abu Dis town, southeast of occupied East Jerusalem, and wounded six with rubber-coated steel bullets, in addition to causing eighteen others to suffer the severe effects of teargas inhalation.

The soldiers invaded the School Street area, near the Al-Quds University campus, clashed with many students, and fired dozens or rubber-coated steel bullets, wounding six students, in addition to firing many gas bombs, causing eighteen others to suffer the severe effects of teargas inhalation.

The Palestinian Red Crescent confirmed its medics rushed to the area, and provided the needed treatment to all wounded students, without the need to hospitalize any of them.

In addition, several Israeli army jeeps invaded Fahma village, south of the northern West Bank city of Jenin, broke into the home of Ahmad Shafiq Sa’abna, and interrogated him before illegally confiscating his car.

The soldiers also invaded Beit Qad and Deir Abu Da’if villages, northeast of Jenin, and drove through their neighborhoods and alleys in a provocative manager before withdrawing.
11 apr 2017
Injuries in Beit Ummar clashes with Israeli forces

A number of Palestinian protesters choked on teargas on Tuesday evening in clashes with the Israeli occupation forces in al-Khalil’s northern town of Beit Ummar.

Activist Mohamed Awad said clashes broke out in al-Dhuhr area, opposite to the illegal Israeli outpost of Karmi Tsur.

The occupation soldiers attacked the Palestinian anti-occupation protesters with randomly-discharged spates of teargas canisters. A number of Palestinians choked on teargas in the clashes.

At the same time, Israeli patrols stationed at a military checkpoint in Beit Jala summoned 25-year-old Khalil Abu Mariya, from Beit Ummar, to questioning in Etzion camp on Thursday.

The attack came shortly before Hebrew-speaking sources reported the abduction of two Palestinians by the Israeli forces as they allegedly attempted to creep into 1948 Occupied Palestine.

The attack represents another chain in Israel’s violations of the ceasefire deal struck with the Palestinian resistance in the wake of the 2014 Israeli offensive on the besieged coastal enclave of Gaza.
10 apr 2017
Israeli army opens fire at farmers in blockaded Gaza

Sometime earlier, an Israeli military patrol in eastern Rafah claimed it was targeted with gunfire.

The attack is another violation of the ceasefire deal struck with the Palestinian resistance in the wake of Israel’s military offensive on the besieged coastal enclave of Gaza in the summer of 2014.
9 apr 2017
Israeli forces raid Arroub College in response to alleged rock throwing 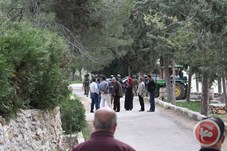 An Israeli army spokesperson, who said she was unfamiliar with the incident, told Ma'an she was looking into the case.

Palestinian stone throwers face harsh penalties by Israeli authorities, with Israel passing a laws in 2015 allowing for up to 20 years in prison if charged with throwing stones at vehicles and a minimum of three years for the act of throwing a stone at an Israeli -- legislation rights groups say was designed specifically to target Palestinians, as Israelis and settlers are rarely prosecuted under the same standards of the law.
8 apr 2017
Israeli Soldiers Abduct Three Palestinian Children In Bethlehem And Nablus

Israeli soldiers invaded, on Saturday at dawn and Friday evening, the West Bank governorates of Bethlehem and Nablus, and abducted three children.

The Bethlehem office of the Palestinian Prisoners’ Society (PPS) said the soldiers invaded the Saff Street area, in the center of the city, and abducted As’ad Mohammad Abu ‘Ahour, 16, after breaking into his family’s home and violently searching it.

In Nablus, in northern West Bank, the soldiers abducted two children, identified as Mohammad Hatem and Khalil Mohammad Ghazal, in Sebastia town, north of the city.

Local sources said the soldiers invaded the town, and opened fire on several residents, before abducting the two children; there have been no reports or injuries.
7 apr 2017
Injuries reported in IOF quelling of Kafer Qaddum weekly march

The peaceful march also asked for opening a street in the town that has been closed for 14 years by the IOF.

Local activist Murad Shteiwi affirmed that Israeli forces fired teargas bombs and rubber bullets at protesters, injuring many of them. All of the suffocation cases were treated in the field.

During the march, which was organized to mark the Palestinian Child Day, participants, including children, held banners calling for their right to live peacefully and securely.
Shots Fired At Fortified Israeli Military Tower Near Ramallah 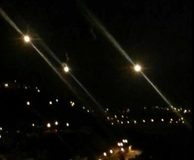 The Maan Palestinian News Agency has reported that several live rounds were fired, on Thursday at night, at a fortified military tower, near Psigot illegal Israeli colony, built on Palestinian lands in al-Biereh city, in central West Bank.

It stated that a speeding car fired many live rounds at the military tower, and fled the scene; Israeli sources did not report any injuries among the soldiers or settlers.

Several occupation bulldozers moved into the northern Gaza Strip, near the town of Beit Lahia, on Thursday morning.

According to Al Ray Palestinian Media Agency, approximately seven D9 bulldozers penetrated 100 meters into the northern border of Beit Lahia, from the western gate of Zikim.

The bulldozers razed the area along the separation fence, amid the flight of reconnaissance aircraft.

Farming in the Gaza Strip’s “buffer zone” is hazardous under the best circumstances. Israeli forces routinely shoot live ammunition at Palestinian farmers in the free-fire area, which stretches hundreds of meters into the besieged territory, from the barrier, separating it and Israel, invading their fields with tanks and bulldozers.
Israeli Soldiers Abduct Two Former Political Prisoners Near Hebron 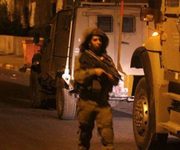 Israeli soldiers abducted, on Thursday at dawn, two former political prisoners from their homes in Beit Ummar town, north of the southern West Bank city of Hebron, and summoned four Palestinians for interrogation.

The soldiers also invaded and ransacked homes in the center of the town, in addition to Beit Za’ta area, and summoned many Palestinians, including an elderly man, for interrogation at the Etzion military and security base, north of Hebron.

The summoned Palestinians have been identified as Yousef Hasan Ekhlayyel, 64, his sons, Aktham, 25, and Karam, 18, in addition to Hammad Ahmad Abu Mariya, 26.

Clashes also took place between the invading soldiers, who fired many gas bombs and concussion grenades, causing many residents to suffer the severe effects of teargas inhalation, and local youths, who hurled stones at the military vehicles.
Undercover Israeli Soldiers Abduct Two Young Men In Jerusalem

Mohammad Abu al-Hummus, a member of the Follow-Up Committee in al-‘Eesawiyya, said the soldiers invaded the center of the town, especially Oleyyan and Mheisin neighborhoods, and clashed with local youngsters, who hurled stones on them.