A number of Israeli military vehicles on Thursday morning launched a limited incursion into the eastern areas of Gaza’s central governorate.

The incursion is another chain in the series of Israeli violations of the Cairo-brokered truce deal struck in the wake of the 2014 offensive on the besieged coastal enclave of Gaza.
Army Injures Several Palestinians Near Jerusalem

Israeli soldiers invaded, on Wednesday evening, the town of Abu Dis, east of occupied East Jerusalem, in the occupied West Bank, and clashed with local youngsters, wounding one, and causing at least eleven to suffer the severe effects of teargas inhalation.

The soldiers invaded the town from several directions, and drove around its neighborhoods and main streets, leading to clashes with local youngsters, who hurled stones at their armored vehicles.

Medical sources said a young Palestinian man suffered a moderate-but-stable injury, after the soldiers shot him with a rubber-coated steel bullet in his mouth. 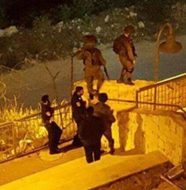 The Palestinian Prisoners’ Society (PPS) has reported that Israeli soldiers abducted, overnight and during earlier hours Thursday, at least nine Palestinians in various parts of the occupied West Bank, and illegally confiscated a thousand US Dollars from one home.

In a press statement, the Israeli army said the soldiers arrested nine Palestinians in the West Bank, including what it alleged, “three who participated in hostilities.”

The Hebron office of the PPS, in the southern part of the West bank, said the soldiers abducted Ahmad al-‘Omari, 63, the director of a local orphanage, after storming into his home and ransacking it, in the Tarbeeqa area, in Hebron city,

In Nablus, in the northern part of the West Bank, the soldiers invaded Balata town, east of Nablus, and abducted a student of the Najah National University, identified as Obada Jamal Dweikat.

Furthermore, the soldiers abducted an Engineer, identified as Monther Mustafa Shonnar, 26, from Nablus, after stopping him at a military roadblock west of Salfit, in the northwestern part of the West Bank.

His father, Dr. Mustafa Shonnar, said the army phoned his home, informing the family that their son has been arrested, moved to the interrogation center in Petah Tikva, and that he will be under interrogation for eight days.

It is worth mentioning that the army recently frequently invaded the Shonnar home, looking for Abada, and threatened to kill him if he doesn’t turn himself in to the army. The military did not explain why it detained him or the reason for seeking his arrest.

Also, the soldiers invaded Nour Shams refugee camp, in the northern West Bank city of Tulkarem, attacked many Palestinians while interrogating them, and abducted a young man, identified as Dia Qseido.

The Qalqilia office of the PPS, in the northern part of the West Bank, the soldiers continued their night invasions and violent searches of homes and property, and abducted Saji Abu Athba, 27.

Dozens of soldiers, and army vehicles, have also been deployed on the main road, and junction, between Habla town and Qalqilia.

In Jenin, in the northern part of the West Bank, the soldiers invaded Jaba’ and Fahma towns, south of the city, violently searched homes and abducted Osama Ahmad Salatna and Mohammad Canaan, after interrogating them and their families.

In Jaba’ town, south of Jenin, the soldiers searched the homes of Mahmoud Shafiq Sa’abna and Hisham Sa’id Sa’abna.

Clashes took place in the town, and the soldiers fired many live rounds, rubber-coated steel bullets and gas bombs; no injuries were reported.

It is worth mentioning that the army said it conflicted a thousand U.S. Dollars from one of the Palestinian homes, and a weapon.
19 apr 2017
Minors among several Palestinians kidnapped by IOF at dawn

A mass abduction sweep was carried out by the Israeli occupation forces (IOF) at predawn Wednesday, sparking clashes with Palestinian protesters.

The Israeli occupation army claimed responsibility for the abduction of eight Palestinians from the West Bank and Occupied Jerusalem on claims of involvement in anti-occupation activities.

Two Palestinians—Khalil Dandan and Maher Afana—were kidnapped by the Israeli forces from Jerusalem’s town of Abu Dis while Tawfiq Afana was kidnapped from al-Maliha village.

At the same time, 17-year-olds Kusay Abu Hashem and Muayed Abu Maria, along with Mustafa Abidou, were kidnapped by the Israeli forces from the southern occupied West Bank province of al-Khalil, activist Mohamed Awad told the PIC.

Ahmed Abu Hashem, aged 50, was also summoned to questioning by the occupation soldiers, who wreaked havoc on his family home.

Meanwhile, clashes flared up in Nablus shortly after seven Israeli military patrols stormed the city at the crack of dawn and scoured residential neighborhoods, most notably Rafidia, to the west.

Another round of violent clashes rocked Qalqilya after the IOF stormed the city and carried out arbitrary combing operations.

Several Palestinians were injured on Monday evening in clashes with the Israeli occupation forces in Occupied Jerusalem.

According to the Palestinian Red Crescent, 11 Palestinians were shot and injured with rubber bullets and 23 choked on teargas during the clashes that flared up in Jerusalem’s southeastern towns of al-Izriya and Abu Dis.

Tension has been running high across the occupied territories as Palestinians took to the streets to mark the Prisoner’s Day and to express solidarity with 1,500 detainees who started on open-ended hunger strike in Israeli jails as of Monday morning.
16 apr 2017
Israeli army moves 100 meters into blockaded Gaza Strip

The incursion is another chain in the series of Israel’s violations of the ceasefire deal struck with the Palestinian resistance factions in the wake of the 2014 military offensive on the besieged coastal enclave of Gaza.
Arrests, home break-ins reported in West Bank sweep by Israeli army

Several Palestinians, including students and academics, were arrested by the Israeli occupation forces (IOF) at daybreak Sunday.

Journalist Ahmed Teim, a resident of Rafidia, said an IOF patrol stormed Palestinian apartments in the area after they smashed all the entrance doors in the hunt for university students.

Other Israeli military troops have been spotted near Amman Street and Joseph’s Tomb, east of Nablus.

At the same time, the IOF stormed the home of the Palestinian student Ibrahim Abed, enrolled at An-Najah University, in Nablus’s western town of Tel.

Lecturer at An-Najah University Dr. Mustafa al-Shanar was rushed to a hospital after Israeli soldiers broke into his family home at the crack of dawn and wreaked havoc on the building, his family told the PIC.

Al-Shanar’s son Assem has also been held in Israeli jails.

Meanwhile, ex-prisoner Aref Ahmed Salim was kidnapped by the Israeli forces from his home in Azzoun town, east of Qalqilya.

The IOF further sealed off the main entrance to the town with a makeshift checkpoint and carried out abrupt combing operations across the area.

The campaign culminated in the abduction of the Palestinian citizen Muhtada Dalal, the son of the slain Palestinian protester Ma’zouz Dalal, from his family home in Qalqilya.
15 apr 2017
Palestinian minor injured by Israeli gunfire in Kafr Qaddum

A 17-year-old Palestinian boy, Yousif Aqel, was injured on Saturday evening in Israeli quelling of a peaceful march in Kafr Qaddum town east of Qalqilya city in the northern West Bank.

The coordinator of popular resistance committees, Murad Shtewi, said that the minor was shot by a rubber bullet in the head.

Shtewi pointed out that the wounded boy was taken to hospital in Nablus city. Suffocation cases among Palestinians were also reported.

The Palestinian activist pointed out that clashes broke out after Israeli forces quelled a peaceful anti-settlement march.
Two Palestinians injured by Israeli gunfire south of Tubas

Local sources told the Palestinian Information Center (PIC) that Israeli soldiers set up a makeshift checkpoint at the main entrance to Tammun and opened fire at a gathering of local young men, who responded by throwing stones.

They added that two young men identified as Hamad Ziyad and Ahmed Ra’ed suffered bullet injuries in their legs and were rushed to the Turkish Hospital for medical treatment.