A round of home break-ins and arrests were reported at daybreak Sunday as the Israeli occupation forces (IOF) rolled into West Bank provinces.

Reporting from al-Khalil, in the southern West Bank, a PIC news correspondent said the IOF rolled into Bab al-Zawia and al-Shuhadaa Street in several army jeeps and bulldozers and leveled Palestinian lands.

Three Palestinian ex-prisoners were kidnapped by the occupation forces from their homes in al-Khalil’s northern town of Beit Ummar.

According to Awad, 46 Palestinians, mostly youngsters and minors, have been kidnapped by the IOF from Beit Ummar since the start of 2017.

On Saturday evening, two Palestinian youths—Mohamed Abu Akr and Majdi al-Natsheh—were kidnapped by the Israeli border cops near the Ibrahimi Mosque, in the Old City of al-Khalil, after they had been subjected to heavy beating and to strip searches on suspicion of holding knives.

The Israeli radio said five Palestinians were arrested by the army forces. The list included two youngsters in their early twenties from Bethlehem.

Meanwhile, 15 Israeli patrols stormed Nablus province and cordoned off the family home of the slain Palestinian youth Ahmed Ghazal, fatally shot by the Israeli army in Occupied Jerusalem on Saturday. Ghazal’s family members had been subjected to exhaustive interrogation in the process.

At the same time, the IOF stormed the environs of the An-Najah old campus and closed al-Bukhary bookshop owned by prisoner Alaa al-Tirawi, who was arrested on October 5 on account of his affiliations with Hamas resistance group. The closure is to be in effect until May 31, 2017.

Clashes reportedly burst out in Qalqilya’s eastern town of Gios moments after they IOF stormed the area and attacked the Palestinian anti-occupation youth with randomly-unleashed spates of teargas canisters.

A military checkpoint was further pitched by the Israeli forces at the main entrance to Azzoun town, where Palestinian vehicles and civilians had been made to endure intensive searches.

The assault culminated in the abduction of youngster Othman Redwan from Azzoun at predawn.
1 apr 2017
Israeli Forces Open Fire on Lands in Southern Gaza

Israeli forces opened fire on Palestinian lands in the southern Gaza Strip, on Saturday morning, according to locals.

An Israeli army spokesperson said she would look into reports on the incident.

The practice has in effect destroyed much of the agricultural and fishing sector of the blockaded coastal enclave.
Gaza: Israeli army intensified drone overflights

The airspace of the Gaza Strip has seen recently intensive Israeli drone overflights, raising fears among the population about Israeli intents to commit new crimes.

Eyewitnesses told the Palestinian Information Center (PIC) that the Israeli occupation army’s drones were continuously overflying Gaza during the past two days after a five-day hiatus.

Those Israeli drone overflights have happened concurrently with the recent tight security campaign which has been launched by the interior ministry in Gaza following the assassination of Mazen al-Fuqaha, a senior commander of al-Qassam Brigades of Hamas.
Army Injures Several Palestinians In Jenin

Dozens of Israeli soldiers invaded, on Saturday at dawn, the northern West Bank city of Jenin, and Jenin refugee camp, and clashed with many local youngsters, causing several Palestinians to suffer the effects of teargas inhalation.

Media sources in Jenin said the soldiers invaded the city, and the refugee camp, from several directions, and fired many gas bombs and concussion grenades, during clashes that took place with local youngsters, who hurled stones at the advancing military jeeps.

They added that many Palestinians suffered the severe effects of teargas inhalation, and received the needed treatment by local medics.

The soldiers also invaded the home of a political prisoner, identified as Mahmoud Saleh Shreim, in Jenin refugee camp, and violently searched it, causing excessive damage.
Israeli Soldiers Injure A Child In Ni’lin 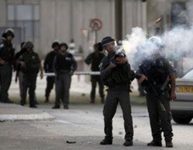 Israeli soldiers shot and wounded, on Friday at night, a Palestinian child in Ni’lin village, west of the central West Bank city of Ramallah, and closed the village’s main road.

Locals in Ni’lin said the child, identified as Jouda Canaan Amira, 14, was shot with live rounds in his legs, and that the soldiers prevented Palestinian medics from approaching him.

An Israeli ambulance later arrived at the scene, and moved the wounded child to an Israeli hospital.

In addition, the soldiers closed the main road leading to Ni’lin, and refused to allow the Palestinians to enter or leave the village.
Army Injures Four Palestinians In Kufur Qaddoum

Morad Eshteiwy, the media coordinator of the Popular Committee against the Annexation Wall and colonies in Kufur Qaddoum, said this week’s protest also marks March 30th, the Palestinian Land Day, in addition to its weekly message against the closure of the town’s main road, for the fourteenth consecutive year, Israel’s ongoing illegal construction and expansion of its colonies, and constant violations.

Eshteiwy added that the soldiers shot, and mildly wounded, four Palestinians with rubber-coated steel bullets, while several others suffered the effects of teargas inhalation.

The soldiers also damaged a main water pipeline, providing the village and its lands with the needed water supply, and added that Local Council workers managed to fix it four hours later.

The protest marks the 44th anniversary of the Palestinian Land Day, and was attended by dozens of local, Israeli and international peace activists, in addition to representatives of the Workers Union Coalition in Palestine, and the World Federation of Trade Unions.
Israeli Soldiers Injure And Abduct, A Child Near Ramallah

Israeli soldiers shot and injured, on Friday evening, a Palestinian child, near Ni’lin village, west of the central West Bank district of Ramallah, and abducted him without allowing any Palestinian, including medics, to reach him.

The soldiers closed the entire area for all Palestinian traffic, and prevented Palestinian ambulances and medics from approaching the wounded child, and later took him to an unknown destination. The extent of his injury remains unknown.

Furthermore, the army installed a military roadblock at the main entrance of Ni’lin village, and prevented the Palestinians from entering or leaving it.
30 mar 2017
Clashes, arrests as Israeli army rolls into West Bank

Clashes flared up across the West Bank at dawn Thursday shortly after the Israeli occupation forces (IOF) stormed its various provinces and kidnapped a number of Palestinian civilians.

Reporting from al-Feraa Camp, to the northeast of Nablus, a PIC news correspondent said a Palestinian youth sustained wounds following clashes with the IOF.

Youngster Mohamed Nassar was kidnapped by the Israeli soldiers in the process.

The IOF also stormed Sebastiya town, to the northwest of Nablus, along with Beit Furik and Beit Dajan, to the east.

At the same time a horde of Israeli settlers, escorted by army troops, broke into Sebastiya’s archaeological zone and destroyed a Palestinian flagpole. Violent clashes burst out shortly afterwards.

Meanwhile, the occupation forces wreaked havoc on civilian homes in the southern occupied West Bank province of al-Khalil after they stormed the city in 11 military vehicles.

The IOF kidnapped Mohamed al-Khadour from his home in Bani Na’im town and two other Palestinians from Beit Ummar.

In the meantime, clashes burst out shortly after the IOF stormed the northern West Bank city of Jenin and raked through residential alleys.

A number of Palestinian civilians choked on teargas canisters, some among whom while indoors. The IOF reportedly showered the area with randomly-shot spates of bullet fire.

The IOF further broke into the home of ex-prisoner Sheikh Ezzedine Amarna in Yabad and seized his three laptops, before they attacked the inhabitants.

A round of clashes rocked Qalqilya, in the northern West Bank, and culminated in a set of ambushes and military checkpoints arbitrarily pitched in the city.
29 mar 2017
Israeli special force arrests Palestinian youth in Bethlehem

An Israeli special force arrested a Palestinian youth on Wednesday and assaulted his brother in downtown Bethlehem.

According to the PIC reporter, an undercover Israeli force, accompanied by a number of military vehicles, stormed al-Halal market in Bethlehem, arrested Firas Nawawra, 34, and severely assaulted his brother Hasan who was transferred to hospital after sustaining several injuries and bruises.

Following the raid, confrontations broke out between Palestinian youths and the Israeli occupation soldiers who opened fire in the air and threw tear gas canisters at the citizens.
Army Abducts One Palestinian, Injures Several Others, In Jenin

Israeli soldiers invaded, on Wednesday at dawn, the northern West Bank city of Jenin, and nearby towns, broke into and searched many homes, and abducted one Palestinian. The soldiers also injured several Palestinians, and caused damage to cars and homes, in Jaba’ town, south of Jenin.

Media sources in Jenin said the soldiers abducted a young man, identified as Sultan Bassam Hamdan, 31, from Jenin city, after summoning him for interrogation in Salem military base.

Clashes took place in Jaba nearby town, and the soldiers fired many gas bombs, rubber-coated steel bullets and live rounds, including at home, causing dozens of residents to suffer the severe effects of teargas inhalation.

The soldiers resorted to excessive use of force against the Palestinians, assaulting them while searching their homes, and deliberately smashing their belongings in addition to using military dogs in the searches.